People include the architecture of 20th century dictatorships in the category of totalitarian art. Totalitarian architecture invokes a feeling of pressure due to its immensity as well as forms that refer to classical traditions. In fact, all of these buildings were part of the Western mainstream. Their special suppressive charm ensues from the mix of ideology and horror from which they originated. Read more about the issues around the term “totalitarian architecture”.

Totalitarian architecture is created under a state’s control in accordance with its cultural policy. It aims to instill the state’s ideology in the most accessible, everyday language. Early Soviet posters with propaganda slogans and realistic images vividly illustrate this. The culture of the regime denied a free intellectual approach to art in favor of a nationalist mythology.

Another tool of totalitarian states’ propaganda is the attribution of the role of the state architect to the leader. It emphasizes the prevalence of the state over society and the system’s hierarchy. Mussolini, Hitler, and Stalin personally approved urban projects. Mao Zedong personally initiated the urban program within the “Great Leap Forward”. Franco considered himself an artist and wrote essays on architecture.

Visually totalitarian architecture usually leans toward monumental forms, on the verge of megalomania. Massive buildings, whose exterior décor, color, and design features are rigidly standardized, often pointing upward to dominate man. In the history of totalitarian architecture, it was common to appeal to images of the Roman and Byzantine empires as well as to ancient Greece – to emphasize the connection with great ancestors. A totalitarian state forbade architects to exercise artistic originality, so their works were often limited to the repetition of existing styles.

Totalitarian architecture is not a distinct style, so despite some common visual attributes, it doesn’t follow universal laws. The term itself usually refers to the Art Deco style seasoned with ideological aesthetics. After World War I, American Art Deco in the form of brutal structures migrated to Europe, where it organically and peacefully coexisted with the avant-garde. Moreover, in the 1920s and 1930s, architecture far from totalitarianism had the same trends in the development of constructive and decorative forms and in particular, sought to simplify the classics. The State’s ideology strongly influenced totalitarian architecture, so each style within a given dictatorial regime had its territorial peculiarities. During the interwar period totalitarian architecture was mainly erected in the Soviet Union, as well as in Nazi Germany, and Facist Italy.

The Exposition Internationale des Arts et Techniques dans la Vie Moderne (International Exposition of Art and Technology in Modern Life) was held in 1937, in Paris. It is a great example of totalitarian architecture at its most mature. It was held against the backdrop of international tensions prior to World War II. The Soviets presented a monumental work – a synthesis of architecture by Boris Iofan and sculptures by Vera Mukhina. The building combined both the laconism of the avant-garde along with the solemnity of the classics.

It was situated opposite the German pavilion by Albert Speer. Speer’s building was something in between a fortification and an ancient temple, marked by the simplicity and clarity of classical forms. The Pavilion of Italy was a rectangular structure, referring to the Colosseum. In the style of Italian modernism, the building showed openness and lightness of form and the use of new technologies. 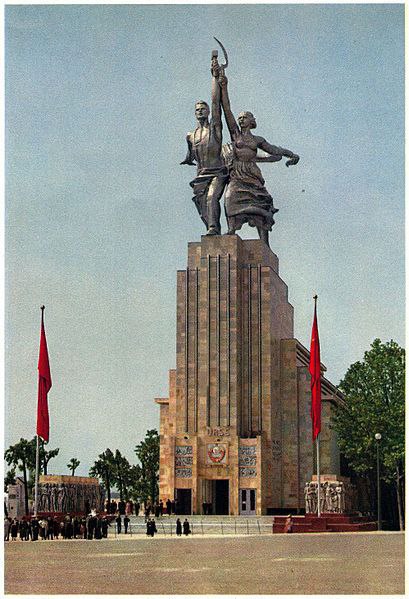 The Soviet pavilion surmounts by the sculptural group The Worker and the Kolkhoz Woman. The building combined the laconism of the avant-garde with the solemnity of the classics.

The pavilion by Albert Speer was a building combining features of fortification and an ancient temple. It was marked by the simplicity and clarity of classical forms.

The Pavilion of Italy was a rectangular structure, referring to the Colosseum. Marcello Piacentini used a modern, reinforced frame combined with traditional elements.

The artists of Fascist Italy were distinguished by a high degree of craftsmanship and cultural continuity. This is evident in the Square Colosseum in Rome. The building was designed by Giovanni Guerrini, Ernesto Padula, and Mario Romano in 1938 in the style of Italian rationalism with Neoclassical elements. Conversely, Nazi Germany rejected any artistic impulse inspired by the avant-garde. They deemed it abnormal, a depraved Communist art. Hitler believed that imitation of the past was a futile exercise and that form follows function.

In Soviet Russia, they also discouraged originality. Therefore kitschy art emerged, like the sculptures at the metro station Ploshchad Revolyutsii in Moscow, installed in 1947 by Matvey Manizer. The sculptural images and forms refer back to ancient Greek sculpture, but depict Soviet workers and peasants, for propagandistic goals. The sculptors made a kitschy product with bizarre borrowings and combinations from different historical eras. 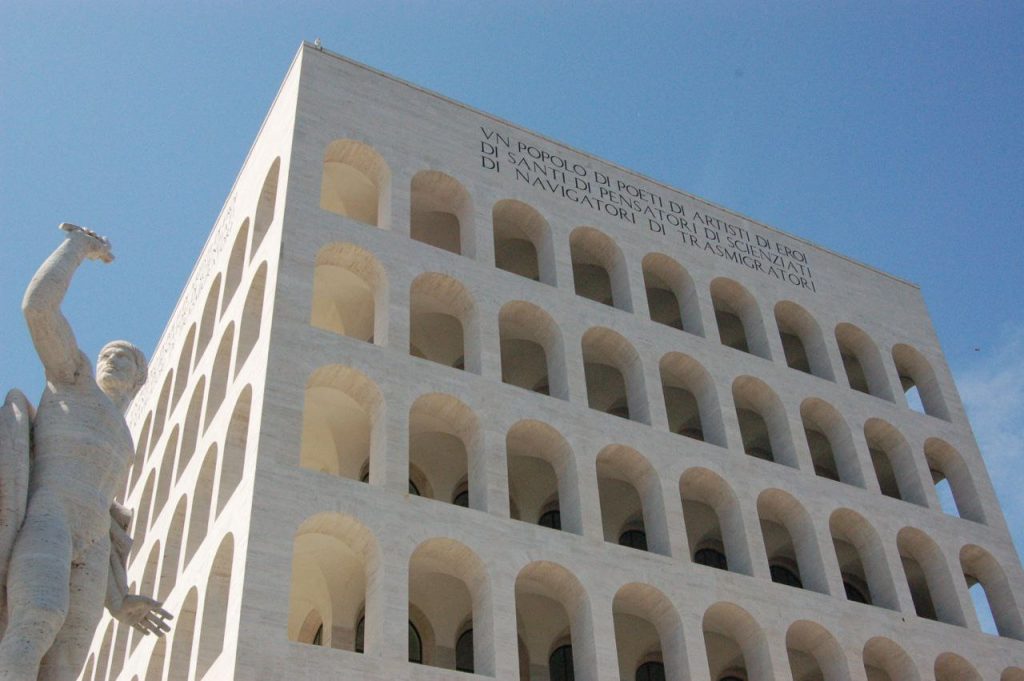 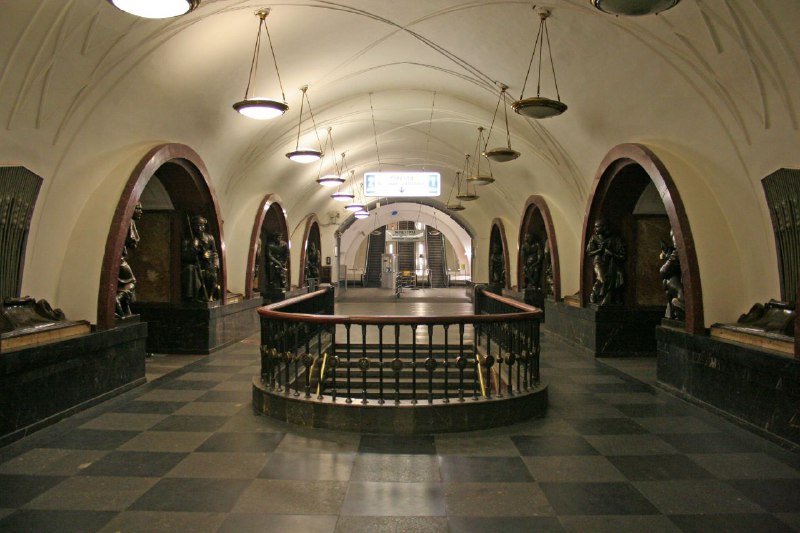 Square Colosseum was designed by Guerrini, Padula, Romano in 1938 in the style of Italian rationalism.

Metro station in Moscow, installed in 1947 by Manizer.

The imposing size of architecture makes it the perfect instrument to express the superiority of the collective over the individual and to satisfy the imperial demands of dictators. Yet, often constructions whose scale was not comparable with reality remained within the framework of grandiose projects.

For example, there was a plan to erect the Volkshalle in the center of Berlin – a huge domed building, 250 meters high, with a capacity for 180 000 people. In Hamburg, a facility of the same height and quality as American skyscrapers was to be built. The tallest building in the world was to be the Moscow Palace of Soviets – a symbol of the victory of socialism. According to Boris Iofan’s plan, it was to be a 300-meter palace, topped by a 100 meter tall statue of Lenin. None of these projects were completed because of the scale, complexity, and high cost of the work. 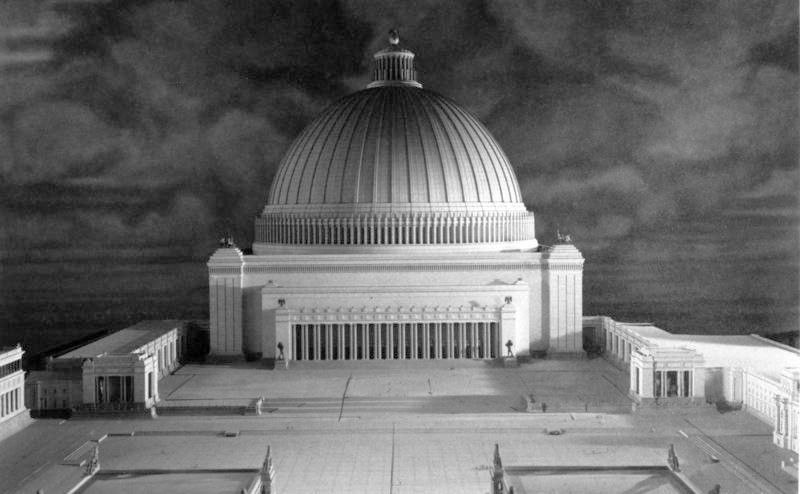 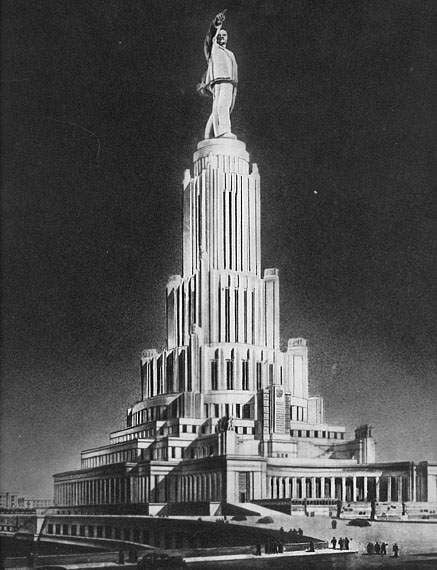 The Volkshalle was a monumental building planned by Albert Speer for Germania in Berlin. The project was never realized. Hitler was inspired by the Roman Pantheon.

An unrealized project for the construction of a high-rise administrative building in Moscow. The design of the palace marked the transition to the Stalinist Empire style in Soviet architecture.

However other, more modest, projects were built. In Germany, on the island of Rügen, the 8 buildings of the Colossus of Prora stretch along 4.5 kilometers. This resort complex was designed by Clemens Klotz between 1936 and 1939. The buildings are distinguished by their uniform, horizontal roofs and lack of decoration. In 1940 Karo Halabyan and others built the Red Army Theater in Moscow in the Stalinist style. Here, the building’s façade reflects a desire to combine the incongruous – classical forms with Soviet ideology, similar to the case of the Square of the Revolution metro station. Ancient-like columns, for example, have capitals shaped like five-pointed stars that were the symbol of the Soviet army. 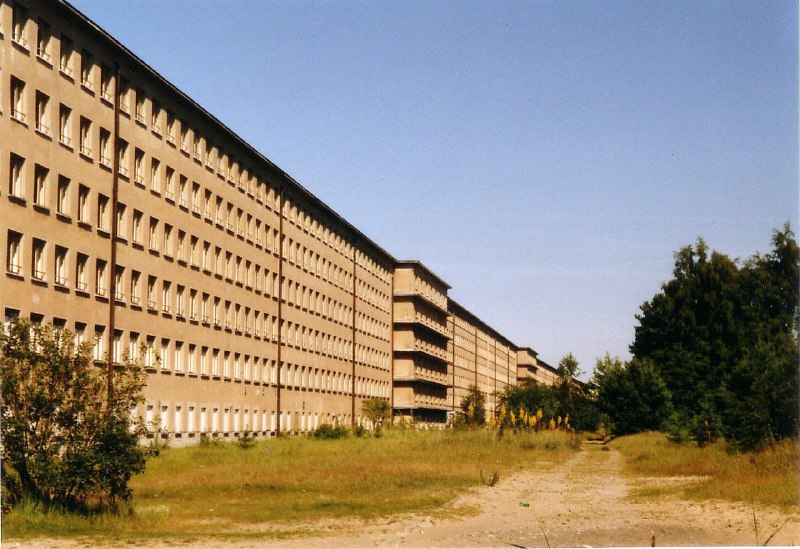 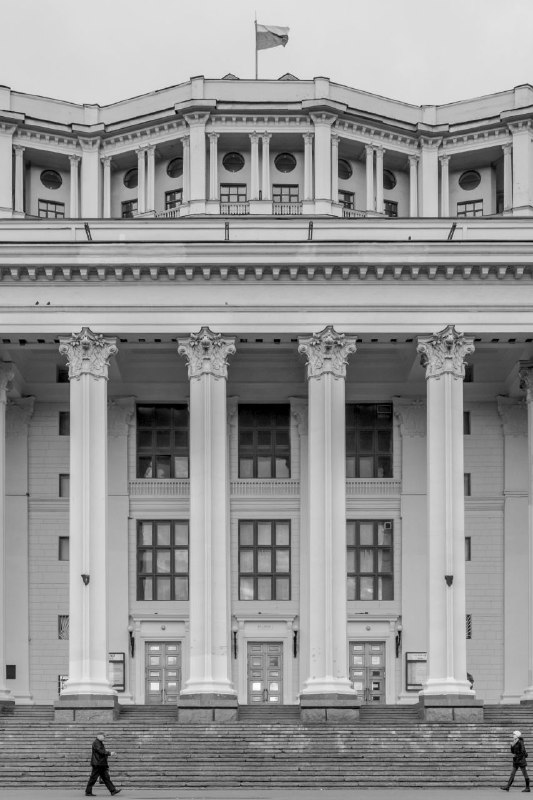 Colossus of Prora was built in 1936-1939. The buildings are designed to accommodate 20 thousand vacationers and stretched in a row for 4,500 m. Within a few years, all the major construction companies of the Reich were involved in the construction of Prora.

The theater’s façade reflects a desire to combine the incongruous – classical and Soviet forms. This was the first theater building designed and built in Moscow after the revolution. The plan was based on the emblem of the Soviet army: a five-pointed star.

Architecture of the Post-War Dictatorships

The architecture of dictatorships after WWII had the same ideological aura. Also they paid more attention to the nationalist component. The peculiar feature of General Franco’s Spanish architecture is related to the ideology of National Catholicism. The famous Valley of the Fallen was built by Pedro Muguruza between 1940 and 1958. At the center of the complex is a monastery with an underground basilica and a huge cross on a rock. The style of the complex refers to the architecture of the 16th century El Escorial royal monastery. The University of Gijon, designed by Luis Moya from 1948 to 1957, features styles from different eras. The building combines elements of antiquity, renaissance, and baroque. The tower located on the campus is reminiscent of La Giralda minaret, built during the period of Muslim rule in Spain. 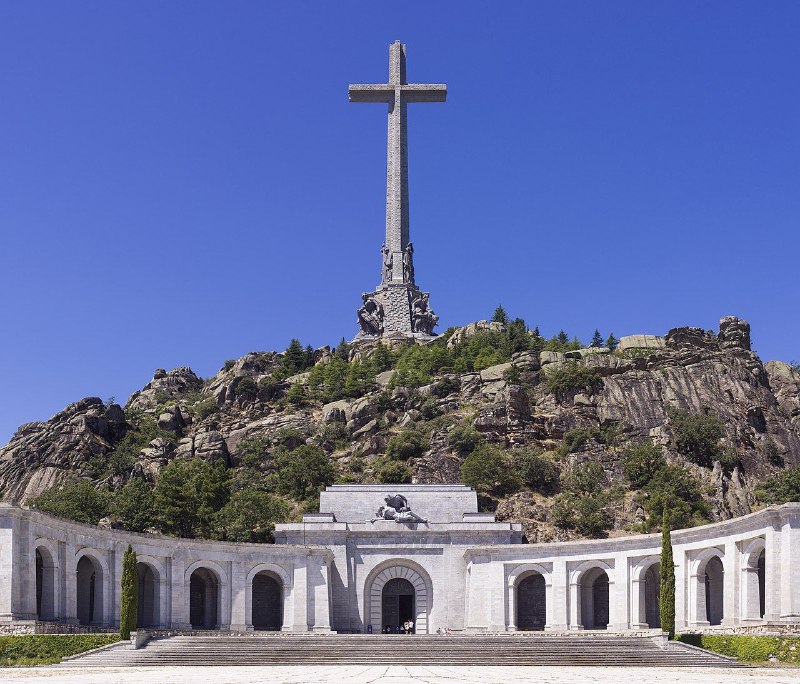 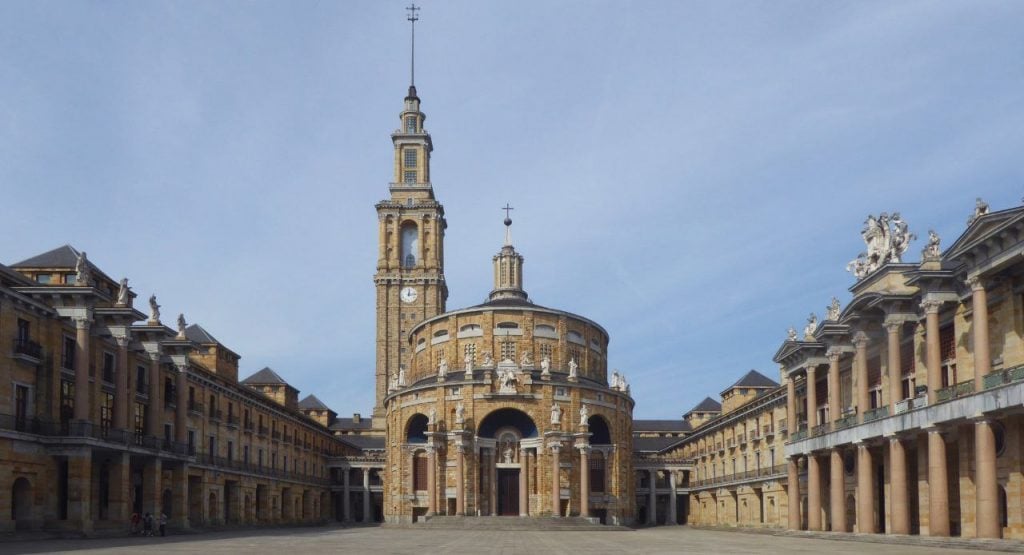 Valley of the Fallen

The central work of Francoism is the complex of the Valley of the Fallen. This is the tomb of José Antonio Primo de Rivera and the memorial to the fallen in the Civil War of 1936-1939.

The University of Gijon

The University was built by Luis Moya in 1948-1957 and can be described as an ideal city. The forms of the buildings are complex and allude to antiquity, renaissance, and baroque eras.

The goal of Chinese architects during the Mao era was to put modern socialist ideas into a historical architectural form, as the idea of the national became important here as well. Liang Sicheng proposed the concepts of synthesis and translatability. This meant that traditional Chinese architecture was translated into a new format by combining classical composition with new materials and forms. The totalitarian architectural vision was soon realized as part of the Great Leap Forward. Beijing’s Ten Great Buildings were built in 1959. They included the Cultural Palace of Nationalities, National Agriculture Exhibition Hall, Beijing Railway Station, among others. The architecture of these buildings repeats some traditional Chinese design features, such as massive roofs overlapping in the form of a pagoda and a special system of under-roof brackets – dougong. 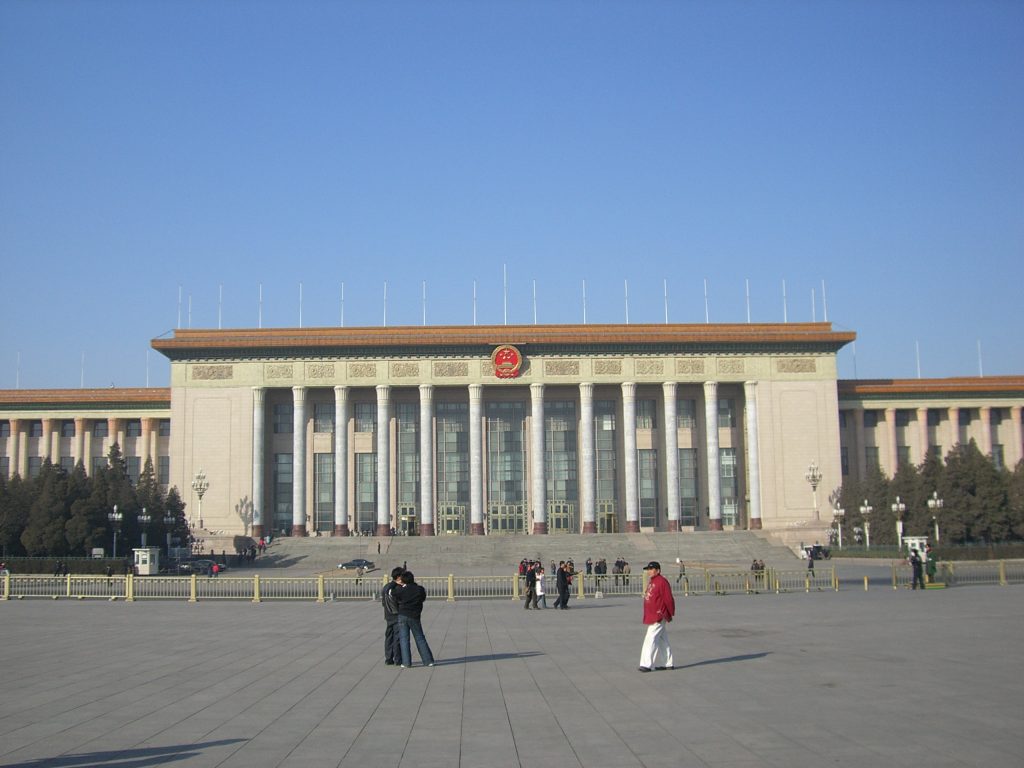 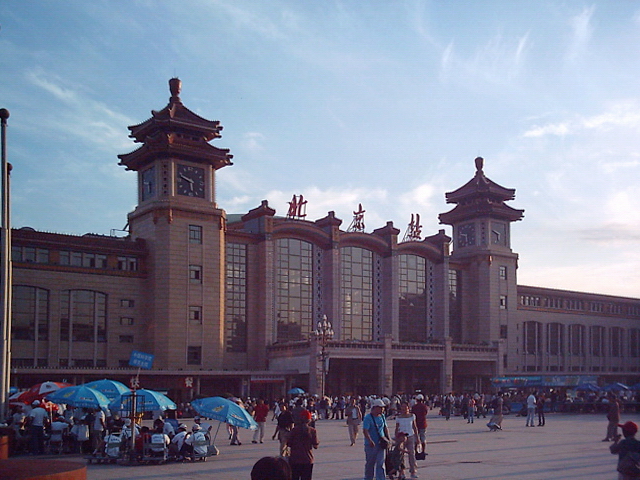 Great Hall of the People

The architecture combines modernism, communism, and historicism. The building was inspired by Soviet architecture.

The Beijing Railway Station was created as part of the Ten Great Buildings projects. The architecture combines modernism, communism, and historicism.

Totalitarian architectural aesthetics are specific to each country under a dictatorial regime. Buildings under Mussolini, Hitler, Stalin, Franco, and Mao have many features in common, but they also have many differences due to the characteristics of each regime’s ideology.