You Give Me Fever: Egon Schiele’s Orange Obsession 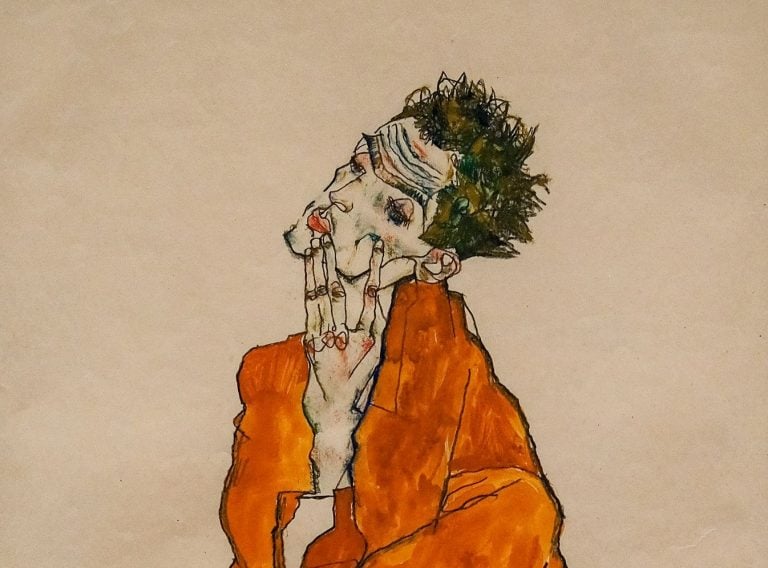 Recently I found myself asking: why have I never realized Egon Schiele’s orange obsession? Clearly, there are many of his paintings that feature this bold shade. Let’s discover them together!

Schiele and the Color

Alright, we know that Egon Schiele was one of the first Viennese painters to abandon Gustav Klimt’s Secessionist style (Oskar Kokoschka is the second one) and develop a very personal way of painting which today we describe as Expressionistic. Nevertheless, his expressionism was totally different from the Expressionism associated with Die Brücke group. How was it different?

While Ernst Ludwig Kirschner and the crew composed their works out of patches of bright and very saturated colors (often contained by a strong black outline), color is not the first thing that comes to mind when one thinks of Schiele’s work, is it? Rather, he expressed emotion through disegno. His drawing often reduced to a single continuous line constructing contorted and disturbing bodies that expressed sexual frustrations, angst, and restlessness.

When it comes to many of his portraits and self-portraits, they were created with earth colors that often carried a “dirty” quality such as dark browns, dirty whites, swamp greens, and black. The yellowish and greenish hues of his sitters’ skins suggest some sort of malaise that permeates his entire body of work.

Yet, at some point, I realized that the sickening colors are not the only ones he picked. In fact, there is a color that Schiele used extensively and repeatedly throughout his career (leaving aside the last two years of his activity in which he quite changed his style and made it more colorful; who knows how it would have developed further had he not suddenly died). And this special color was orange, often mixed with varied hues of red.

Red of the Martyrdom

I found myself asking why he picked orange and red so often. Was it for their association with anger, blood, or even sacrifice? Schiele believed that a real artist is a chosen man who is misunderstood by society, experiences ceaseless torment and often has to sacrifice themself for the sake of eternal beauty which is art (this is why we often come across such themes as saints, spirituality, and contemplation in his work).

Or was it rather for the colors’ symbolism of sex – think of its association with prostitutes and brothels (red-light districts), and hence guilt and sin? Schiele had a very profound relationship with his mother. When Schiele’s father died, his mother expected him to take up the fatherly role as the head of the family from an early age – he had two other sisters. This relationship led to many emotional troubles, such as suppressed sexual instincts of a young boy who subsequently found an outlet in painting.

I believe it’s both for the symbolism and for the expressive force of the shades. Since they are really strong colors (several studies indicate that red causes the strongest physical reaction out of all the shades, with the level of reaction decreasing gradually with orange, yellow, and white), it also allowed Schiele to “scream” his pain right onto the canvas.

And the Truth Was Revealed

If you have any thoughts on Schiele’s extensive use of these colors, do not suppress your red anger or orange frustration and drop me a line.