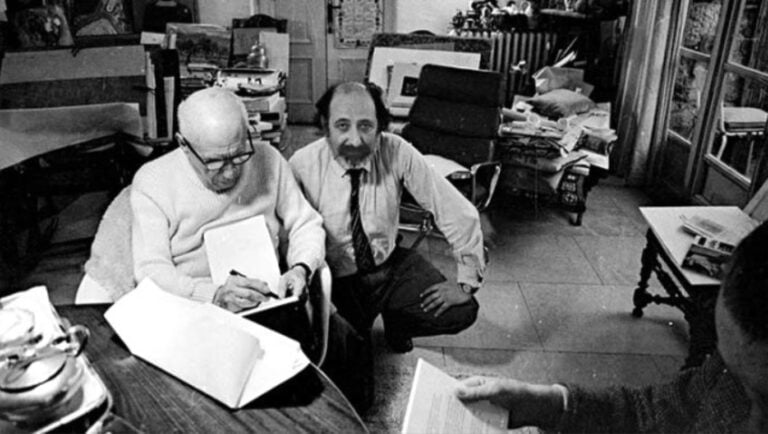 Whether photography is purely art or a branch of journalism can be a subject of discussion. For photographer Ara Güler, the artistic quality of his profession was definitely of secondary importance. He saw his photography projects as adventures that he took to document his age. One of the most crucial of these adventures, as he explained, was the one he had with Pablo Picasso.

The photographer was born in Istanbul, Turkey in 1928 to Turkish-Armenian parents. He initially wanted to choose a profession in the area of theatre. That is why, during his high school years, he attended courses in one of the most outstanding theatre academies in Turkey at the time. Later in 1950, however, he was employed as a photojournalist while also pursuing his bachelor studies in economics

From the 1950s until his death in 2018, Güler worked as a photographer for numerous books, magazines, and newspapers not only in Turkey but also around the world. What helped him become so popular were his portraits of Istanbul. Visiting all the small neighborhoods, observing and mingling with communities such as the fishermen of Bosphorus, Güler documented the reality of his city. In several interviews throughout his life, he mentioned how he acknowledged his work as journalism and not necessarily as an act of art.

With all the research, preparation, time, and effort he put in while preparing a photo-series, Güler saw each of his projects as historical documents. For him, every photoshoot he conducted was an adventure from which he could learn and improve himself as a person and as a professional. his career peaked when he photographed some of the most prominent figures of the 20th century such as Salvador Dali and Alfred Hitchcock. On several occasions, however, Güler mentioned how his work with Pablo Picasso was among the most important of his career.

The Encounter with Picasso

In 1971, Güler was working for the publishing house, Skira, in France. There, he was assigned to take photographs for the upcoming book Picasso: Metamorphoses et Unité. Devised and written by the art historian Jean Leymarie, the book was being published to honour Picasso’s 90th birthday. Since he was very excited about this project, Güler got in contact with Picasso’s acquaintances to learn more about him before conducting the photo-interview.

The 4-day interview took place in Picasso’s own house near Cannes in France. Güler photographed Picasso in his private environment in the most natural sense. For Güler, the highlight of the interview was when Picasso decided to draw him to show his gratitude for Güler’s help and dedication. As Güler explained, Picasso thought that the photographer reminded him of Paul Cézanne. Therefore, he ended up drawing a figure that was in-between Güler and Cézanne.

Güler was very impressed by Picasso’s humble background before fame and his carefree attitude in life. He brought Picasso’s drawing of him back home to Turkey. Today, the original drawing is exhibited in Ara Güler Museum in Istanbul, along with the photographer’s full archive of works.