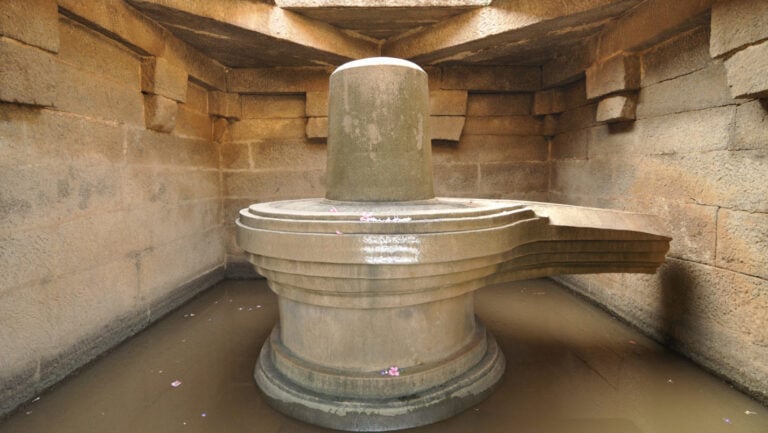 The Shiva Linga or Shiva Lingam is a highly regarded and widely recognized icon in the Hindu world. This curious phallic structure has been worshipped by many generations of Hindus and the practice continues to be an intrinsic part of religious rituals today. According to the Shaivism movement of Hinduism, the Shiva Linga is an abstract embodiment of the Hindu God Shiva, that represents his grand and unparalleled destructive and regenerative power.

Shiva is the destroyer in the Hindu pantheon and is often believed to be the most powerful god in the Hindu trinity. He is described as a recluse and an ‘outsider’ who prefers the solitude of Mount Kailash to the grandeur of the heavenly court. Shiva is identified in artworks and sculpture by his dark blue skin and his dreadlocked hair. Unlike most other Hindu Gods who are often dressed in fine silks and jewels, Shiva is always depicted in animal skin robes with ashes smeared on his face. Shiva’s most common representation is in the aniconic form of the Shiva Linga.

Origins of linga worship are traced back to ancient Hindu scriptures. The word lingam appears in early Vedic literature, and is contextually understood to mean “symbol” or “sign”. According to the Linga Purana texts, the linga is a cosmic pillar that represents the infinite nature of Shiva, as one with neither a beginning nor an end. There is a hymn in the ancient text of the Atharvaveda that refers to a cosmic pillar.

Shiva Lingas have been found in countless archeological sites from as early as the 2nd Century BCE. One of the oldest examples of a linga is at the Parashurameshwar temple in Southern India that has been dated between the 3rd to 1st century BCE. Khmer kings were great devotees of Shiva and placed a linga at the center of the most important Angkorian temples as part of their royal paraphernalia.

The Shiva Linga or Shiva Lingam is an elliptical structure typically set in the center of a disked base known as a yoni that symbolizes Shakti, the consort of Shiva. Together the linga and the yoni symbolize the cosmic union of the male and female aspects and represent the totality of existence.  The complete structure of a Shiva Linga is divided into three distinct parts that represent the three main Gods of the Hindu trinity; Brahma, the Creator at the bottom, Vishnu, the Preserver in the middle, and Shiva, at the very top.

The pedestal is provided with a passage for drainage for the water or milk that is poured on the top during ritual worship. There are some schools of thought that believe the linga represents a phallus and the yoni represents a vulva, to represent the regenerative power of Shiva and his powerful consort, Shakti.

The structure or form of a linga varies widely from plain, unmarked cylinders to intricately carved pillars of varying sizes; there are some with faces carved on one or all four sides, some depict a cobra coiled around the pillar, while some are anatomically accurate representations of a phallus. The linga may be made of different materials such as stones, metal, gemstones, wood or clay. Different materials have different significance or implications.

Amarnath in the Western Himalayas is a famous pilgrimage site that attracts devotees from all over the world for a natural formation of a linga.  Every winter, the ice drips on the floor of a cave to form a stalagmite that after freezing, looks very much like a Shiva linga.

According to some legends, if Shiva was disturbed or distracted during his meditations, it could bring about the wrath of the reclusive god and cause the destruction of the universe. Several precautions are recommended for worshipping Shiva in his many forms and performing rituals dedicated to the temperamental god. A Shiva Linga is sometimes partly or wholly submerged in water, or water is dispersed onto it by a suspended vessel or kalash. It is believed that the water both awakens the meditative Shiva and also calms or counters his powerful rage. Despite the dangerous risks, the worship of Shiva is widespread and the Shiva Linga continues to be important and widespread iconography in Hinduism today.