The Ruins of Hampi in India 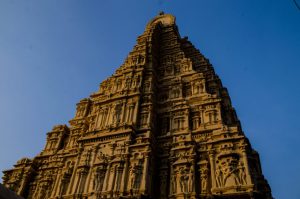 Near the banks of the Tungabhadra river in southern India are an ancient group of monuments known as the Hampi. These grand ruins were once part of a much larger, sprawling metropolis known as Vijayanagar or the city of Victory, that occupied much of the southern peninsula. Vijayanagar was the capital of the historic Vijayanagara Empire, established in 1336 CE. Over the centuries, Vijaynagar served as the capital city of four dynasties.

Under the Vijaynagara regime, the Hampi truly flourished and became one of the largest cities in the medieval era. Archeological studies have evidenced that the city predated the Vijaynagara regime. Brahmi inscriptions and terracotta seals dating to the 2nd and 3rd century BCE have been revealed during excavations.

Hampi is a popular tourist attraction owing to its breathtaking architecture, comprising of a number of temples, shrines, aquatic structures, pillared halls, and royal complexes. The structures are primarily carved into monolithic granite found in abundance in the region. It is believed that to cut the rock, a sequence of holes were drilled into the surface of the stone. Wooden pegs were then inserted into these holes and the pegs were doused with water. The moisture would cause the pegs to expand in size and the mounting pressure would cause the rock to split. Skilled stonemasons were employed to painstakingly carve these stones into intricate works of art.

The ornamentation on most of these grand structures greatly varies. There are multiple layers of moldings, intricate columns, and friezes, abundant with reliefs, and statuary both divine and demon-like, and animals both real and mythical. The palaces and living quarters were made of wood and other materials that did not survive the ravages of time and war, as evidenced by the ash and remains found in the excavations.

There are incredible and iconic attractions worth visiting in the temple complex of Hampi that serve as a testament to the unparalleled skill of this era. These include a large 22 ft high statue of Narasimha, the fierce avatar of Vishnu; there is a 10 foot tall Shiva Linga encased in a cubical chamber; the Kadalekalu Ganesha on the slope of the Hemakuta Hill, which is one of the largest Ganesha statutes in the southern part of India; the famous stone chariot inside the Vijaya Vittala temple complex, and many, many others.

A particularly fascinating aspect of the Vittala Temple architecture are the 56 melodic columns or the musical pillars, known famously as the SaReGaMa pillars. In Indian classical music, Sa, Re, Ga, Ma are four of the seven musical notes (the ancient equivalent of Do, Re, Mi, Fa in western music). The SaReGaMa pillars are load-bearing columns that are made entirely of granite and emit musical notes or rhythmic sounds when tapped gently. You can enjoy some music from these mysterious pillars here!

While most of the buildings in the Hampi region were Hindu temples and complexes that predominantly followed the South Indian or Dravidian style of architecture, among the ruins are also the remains of Jain, Indo-Islamic and Buddhist constructions. Chronicles left by the foreign travelers from Persia and Europe describe in depth a grand and prosperous city of unfathomable proportions.

Hampi has attracted Hindu pilgrims over the centuries. The importance of Hampi as a religious site is believed to be due to the close resemblance of the region to a place described in the Hindu epic of the Ramayana. It is believed that it was in this region that Rama and his brother Lakshman met with Hanuman, Sugriva, and the monkey army in their search for the kidnapped Sita.

Association with Shiva and Parvati

Hampi has also been popularized in Hindu folklore due to its association with Shiva. A mythological tie that has bolstered the importance of Hampi in the Hindu tradition is the union of Shiva and Parvati. Legends tell of the tale of Shiva’s immeasurable grief upon the loss of his wife, Sati. Devastated and heartbroken, Shiva retired himself from the world to meditate and grieve the loss of his beloved wife.

Goddess Parvati (interestingly, a reincarnation of Shiva’s previous wife, Sati) however, had her heart set on winning over the reclusive God and removing him from his isolation. Her desire was well-known and discouraged, for Shiva was known for his tumultuous demeanor and his terrible rage, particularly if he was disturbed during his yogic meditation. Parvati sought the help of the Gods to awaken Shiva to claim his attention. Indra, the king of Gods, sent Kama, the God of Desire to awaken the hermit God. When Kama shot Shiva with an arrow of desire, Shiva opened only his third eye and burned Kama to ashes. This did not dissuade the brave Parvati who attempted another approach. She decided to win him over by herself giving up royal luxuries and herself engaging in meditation and asceticism. This eventually got the attention of the hermit God and they were eventually married.

It is believed that it was upon the Hemakuta Hill in the Hampi that Shiva had chosen to meditate, and it was here that he was married to Parvati.

Rest assured, once Shiva had arisen from his meditative state and Parvati had his attention and affections, she ensured that Shiva brought Kama back to life. According to lore, Shiva could revive Kama’s being but not his body, so Kama existed in a bodiless form thereafter.

After having fended off conquerors from the north and the Deccan region for over 200 years, in 1565, a coalition of sultans entered into a large-scale war with the Vijayanagara Empire. During the fateful Battle of Talikota, the ageing king, Aliya Rama Raya was defeated and beheaded on the battlefield, and large-scale destruction ensued. There exist accounts of the widespread slaughter and the fires that ravaged many temples and royal complexes. Significant exquisite stone buildings and statuary were demolished and plundered, and the once-great city was brought to its knees. In the months that followed, the city was slowly abandoned. One can only imagine the grand effect of all the monuments when they stood in all their glory!

The ruins of Hampi are now a UNESCO World Heritage site.

As we are all in the full swing of summer and ready to explore, we look at the best destinations to visit for art history lovers during vacation. Get...

“As you set out for Ithaka, hope your road is a long one,” thus begins Ithaka, the famous poem by C.P. Cavafy. When we travel, we always...