Not All There – The Enigmatic Sculptures Of Bruno Catalano 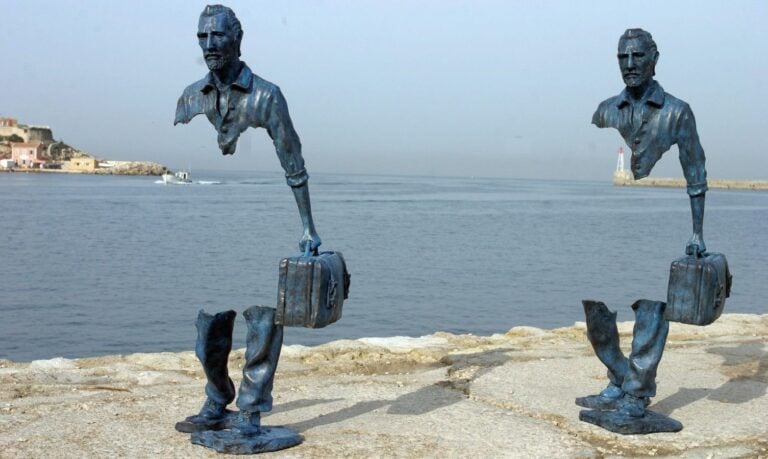 Commemorating Marseille’s status as the European Capital of Culture in 2013, Bruno Catalano created 10 life-size, bronze sculptures to be displayed along the waterfront. Titled “Les Voyageurs” (The Travelers), these surrealist sculptures, depict people with huge portions of their bodies missing. Seeming to defy gravity, the ethereal quality of the work contrasts the melancholy, existential themes of the art.

Born in 1960 to a Sicilian family living in Morocco and raised in France, Catalano became a sailor in his twenties. This nomadic lifestyle was a major inspiration for his work as an artist. The sculptures of Bruno Catalano, especially, Les Voyageurs show this influence. They delve into themes of travel, migration and journeying. Themes extend into exploring the ideas of home, belonging, loss and the experiences of a “world citizen”. Each statue carries a single suitcase, weighing them down, but also serving as their only means of support.

Fascinating technically, artistically, and in its symbolism, the large omissions in the statues leave much to the imagination. Some figures appear to be fading away, while others materialize before our eyes. Contrary to the opinion that travel broadens and enriches, Catalano lamented that all his travels left him feeling that a part of [him] was gone and will never come back.

‘Fragments’ makes full use of this ethereal effect with three sculptures broken down to create one unit. The man looks fragile and delicately held together, losing more and more of himself till only his feet and bag remain.

‘Vichinie’ is possibly a business traveler. She exemplifies the lost-in-thought, gazing into the distance look that so many of the sculptures possess.

The most recognizable and famous of the works is Le Grand van Gogh, inspired by the world-weary painter.

These few examples of the sculptures of Bruno Catalano exhibit the skill of execution and gravity-defying fragility that are so powerful. The unique sculptural execution draws the audience in with the large amounts of negative space and expressive subjects. The viewer is also easily able to project their own stories and given an opportunity to examine their own role as ‘world citizens’.