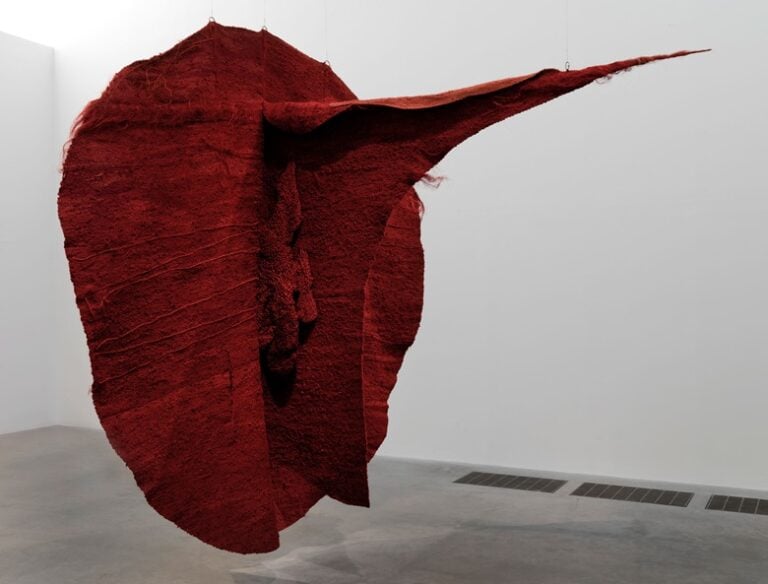 I can see a group of approximately 250 people, all of them standing. Children and adults. I come closer and I realize they have no heads. I come even closer and I touch one of them. He’s soft but his skin is weirdly coarse… It’s not the beginning to a horror. It’s a description of Abakans, unique sculptures created by Magdalena Abakanowicz.

Abakans is a name derived from her surname and it describes her three-dimensional textiles which cease to be just textiles and receive a new life as sculpture. Abakanowicz was a pioneer who transformed the idea of a textile as a two-dimensional object hung on the wall: “The Abakans irritated. They were untimely. There was the French tapestry in weaving, pop-art and conceptual art, and here there were some complicated, huge, magical (forms)…”, she said about Abakans. They may look scary or unnerving because of their deformed shapes and big scale. Especially since they always come in series so they look like an army of aliens.

Abakans are made from sisal fiber which at times is also dyed. Abakanowicz works the material with her bare hands: “There is no tool between me and the material I use. I choose it with my hands. I shape it with my hands. My hands transmit my energy to it. By translating an idea into a shape, they will always pass on something escaping conceptualization. They will reveal the unconscious.”

Abakans sometimes take very abstract shapes because as Abakanowicz admitted, she likes to change what she is working on: “I do not like rules and regulations. They are enemies of imagination”. Despite this, her creatures always somehow refer to organic forms and nature. Even the dehumanized works question the nature of humanity, its place in the world and its condition. Meanwhile her series also touch upon the theme of the role of an individual in the crowd.