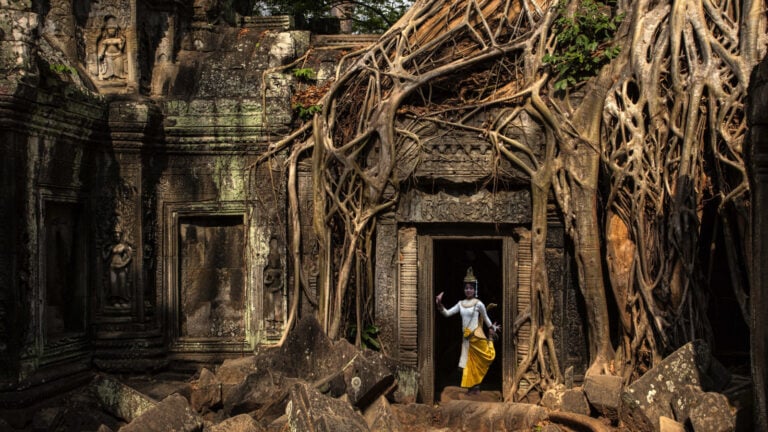 The Ta Prohm temple along with the Bayon and the Angkor Wat are among the most visited sites in northern Cambodia. The most enchanting feature of Ta Prohm is that it looks like the sandstone structures are being swallowed up by the encroaching roots and vines. The atmospheric jungle surroundings and the 2001 movie, Lara Croft: Tomb Raider have made Ta Prohm one of the most popular Khmer temples.

The Ta Prohm was built in the Bayon style in 1186 AD and is located close to the Angkor Thom complex. According to the inscriptions on the temple's stele it was originally called Rajavihara, or the monastery of the king. It served as a Mahayana Buddhist complex. The main image of this temple is of Pragnya Paramita, the personification of wisdom in Mahayana Buddhism. Khmer Emperor Jayavarman VII modeled this image after his mother, Rajachudamani.

Ancient Khmer had well-planned cities with schools, hospitals, reservoirs, as well as a substantial population. The Ta Prohm is one of the few Angkorian temples where a stone inscription provides detailed information about the inhabitants of the temple. This temple was home to around 12,640 people including 18 high priests and 615 apsaras or dancers. More than 800,000 people lived in villages surrounding the temple and provided goods and services to the temple's inhabitants. The temple itself was home to a bounty of treasures such as gold, pearls, and silks.

Layout and Design of the Temple

Unlike the pyramid structure of many Khmer temples, the layout of Ta Prohm is relatively simple. It has several one-story buildings enclosed by a rectangular wall. The main building is accessible by a short walk through the jungle and is not immediately visible from the road. There are stone terraces in the shape of a cross that form a walkway over a narrow moat. This leads to yet another enclosing wall within which the main temple sits. In the interior are many courtyards, passages, and towers that are partly destroyed and partly conserved by thick foliage.

The Ta Prohm comprises a central sanctuary where holes are visible in the walls that may have held a covering of stucco or metal. Additionally there are 39 other shrines with towers on top. Two of these shrines were dedicated to the guru and the brother of Jayavarman VII. The Hall of Dancers was the centerpiece of Ta Prohm, with 48 ornate pillars supporting a corbelled roof. The pillars have exquisite carvings of dancing apsaras, elephants, floral motifs, etc. The walls of the Hall of Dancers also had niches with friezes of Bodhisattvas and mythical animals.

The Ta Prohm does not feature as many complex carvings or narrative bas-relief galleries as the Angkor Wat. It is possible though that more carvings existed that may have decayed over the centuries in the enveloping jungle. It is also possible that they were destroyed following the death of Jayavarman VII and during the Hinduism restoration of the Khmer empire under Jayavarman VIII.

In the 15th century the invading Siamese destroyed the capital of the Khmer empire. Following this defeat the Khmer kings left the Angkorian region for Phnom Pehn. Thus they abandoned the Ta Prohm (along with the other surrounding Angkorian sites). The jungle eventually swallowed it up. It was forgotten until its rediscovery in 1860 by the French naturalist Henri Mouhot.

Extensive conservation and restoration works have taken place in recent years at the Ta Prohm including the installation of wooden walkways with handrails. The Archaeological Survey of India together with the APSARA (the Authority for the Protection and Management of Angkor and the Region of Siem Reap) have undertaken the conservation work.

These agencies have chosen to leave most of Ta Prohm as it was found, however. This is to display the mesmerizing effect of the jungle on the structures after centuries of abandonment to nature. The roots of the trees have attached themselves to the porous sandstone, even extracting water from the stones. This both undermines their structural integrity and also holds them up at the same time.

Ta Prohm is also home to a mysterious stone carving of what appears to be a stegosaurus. This carving sparked a discussion as to whether the Khmer civilization knew about the existence of dinosaurs. Though it is an exciting prospect to imagine that the ancient Khmer people knew about dinosaurs, it is far more likely that this is a carving of a rhinoceros with foliage in the background.