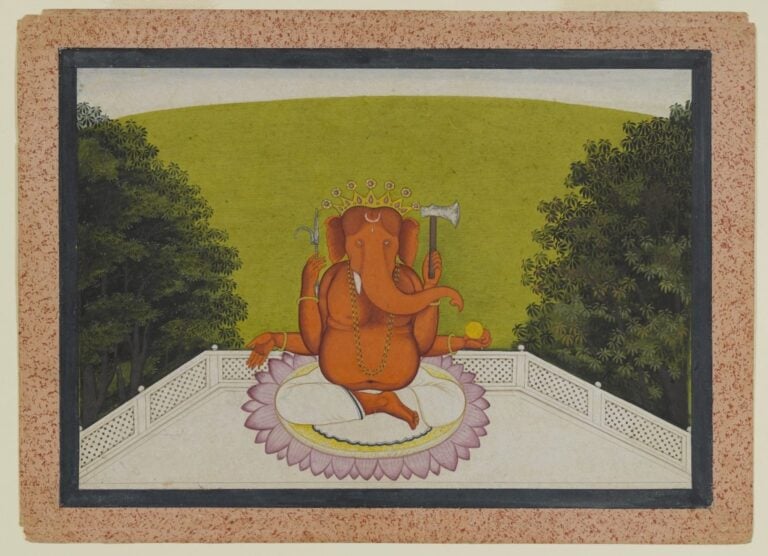 Ganesh is the patron God of writers and intellectuals, and arguably the most well-known of the Hindu Gods. He is worshipped across all sects of Hindus and also by Buddhists and Jains. Mantras and rituals dedicated to Ganesh are offered before the commencement of any sacred rituals or festivities to ensure protection. As with other Hindu deities, there have been wide variations in his representation over time and across various countries and cultures, though he is usually depicted with the head of an elephant and a human body.

A long time ago on Mount Kailash, Parvati was alone in the home she shared with her husband, Shiva. Using her divine powers, she created Ganesh to keep her company while Shiva was away. One day she asked Ganesh to guard her door and not let anyone in while she bathed. As Ganesh stood guard, Shiva returned. Enraged upon being prevented from seeing his wife by a strange young boy, the quick-tempered Shiva beheaded Ganesh and his head flew far into the distance. Parvati was drawn out by the commotion and was understandably distraught on finding her child’s lifeless body on the floor. To appease his wife, Shiva found the first head he could and revived Ganesh. As a gesture of thanks for Ganesh’s bravery and loyalty, Shiva granted Ganesh with the gift of being worshipped first, before any other gods.

Normally Ganesh is shown with 4 arms but in some renditions, he may have 2, 6, 8, 10 or 16 arms. Ganesh symbolism is related to the vanquishing of physical and spiritual obstacles. He is often portrayed with conch shells, an axe, a rope or noose and sometimes a trident. As with other Hindu Gods, he may also be depicted with or on lotuses, a Hindu symbol for enlightenment and divinity. Often one hand is in the common abhaya mudra, the hand gesture signifying a blessing for all those who worship him. In most renditions of Ganesh, one leg is on the ground while the other is folded up, emphasizing the importance of balance between the materialistic and the spiritual. The leg on the ground indicates the need to perform worldly duties, while the leg pointing upwards serves as a reminder of our divinity.

A plate of sweets at Ganesh’s feet symbolizes power and material wealth. He is often accompanied by his animal vehicle or vahana, a rat or mouse. On some rare occasions, Ganesh is shown with 5 heads. The seated Ganesh is preferred in homes where calm energy is usually sought, while businesses and workplaces may choose a standing or dancing rendition of Ganesh to invoke enthusiasm and vigor.

The most common depictions of Ganesh, known as Vastu Ganesh have his trunk facing left. The left side of the body represents feminine energy. This icon is believed to represent the calming aspect of Ganesh and is preferred for placement in homes to invoke relaxation and peace.

The right side of the body represents masculine energy. When Ganesh’s truck faces the right, the form is known as the Dakshinabhimukhi or the Siddhi-Vinayak. In this form, Ganesh’s energy is hostile and powerful. Worshipping Ganesh with his trunk facing right is believed to yield quick results, however, a stricter set of religious rituals must be adhered to appease his aggressive force.

Ganesh is sometimes referred to as Ek danta, or one with one tooth, referring to his broken tusk. There are three tales used to explain this occurrence. According to one of the legends, Ganesh broke half of his tusk and used it as a pen to write down the Mahabharata – one of the two greatest works of South Asian literature. The author Ved Vyasa dictated the story of the Mahabharat to Ganesh under the condition that Ganesh could never stop writing during the dictation. When Ganesh’s quill began to wear away during Ved Vyasa’s narration, Ganesh grabbed the closest thing he could to continue writing and broke off his own tusk.

God of Beginnings, Remover of Obstacles

As a result of the boon from Shiva, Ganesh is honored before any other Gods and Ganesh mantras are chanted at the beginning of any Hindu ritual to bring protection, luck, and power to all those involved, and remove any potential ‘obstacles’ that may lie ahead. Even today his role as the remover of obstacles is apparent by the images or statutes of Ganesh used at the entrance of Hindu homes, temples or other structures to protect all those inside as well as anyone who enters from harm.