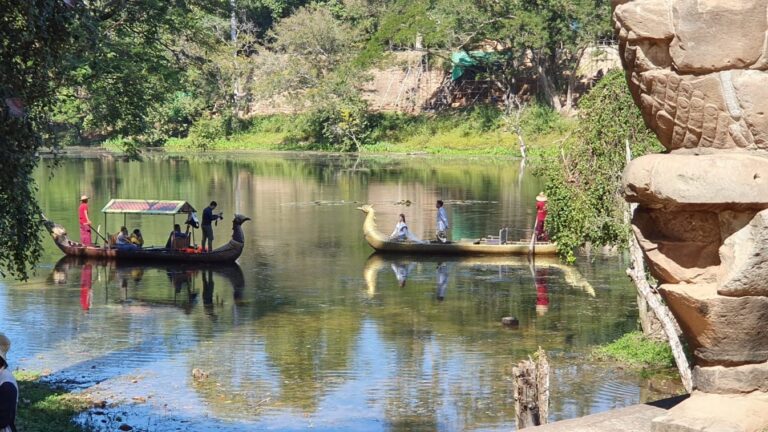 Angkor Thom or the 'great city' was the last Khmer empire's capital from the 12th century until its abandonment in the 16th century. At its peak, the city was home to a population of around 1 million people. Angkor Thom contains the remains of a large number of temples and palaces of different ages and styles. The fortified city is not only an architectural marvel but also an incredibly well-planned ancient city with hospitals, schools, and reservoirs (known as barays).

Angkor Thom came into existence under the patronage of Jayavarman VII, when he defeated the Cham invaders from Vietnam who had destroyed the old Khmer capital of Yashodhapura. Some of the monuments in the Angkor Thom complex such as the Baphuon Temple and the Phimeanakas were already in existence before the establishment of the city by Jayavarman VII.

Layout of the Angkor Thom

The causeway entrances to the Angkor Thom portray the Hindu legend of the churning on the cosmic ocean. There are 54 Devas (Gods) on the right and 54 Asuras (Demons) on the left guarding each side of a long bridge to each of the five entrances into Angkor Thom. Some of the heads on these Devas and Asuras have been replaced during restoration efforts. A nine-headed serpent or naga’s body is supported by each of the devas and the asuras to form a railing on the bridge. The center of the gates is adorned with the face of Avalokiteshvara, the Bodhisattva ('one who is bound for enlightenment') of compassion and mercy. The face of the Avalokiteshvara was modeled after Jayavarman VII, himself.

The east gate of Angkor Thom made an appearance in the 2001 movie Lara Croft: Tomb Raider.

Unlike his Hindu predecessors (and successors), Jayavarman VII departed radically from the Shaivite (worship of Shiva) and Hindu tradition of his predecessors by adopting Mahayana Buddhism. This is apparent in the architecture of Angkor Thom as compared to other Angkorian architecture, which is more Hindu-oriented.

The Bayon temple is recognizable from the 216 smiling faces of the Avalokiteshvara, the bodhisattva of compassion – modeled after Jayavarman VII, himself. The astonishing layout is unique in Khmer architecture. It comprises 54 towers and three levels of tunnels, stairs, yards and blocked doorways creating a mesmerizing labyrinth. The galleries on the first and second levels have narrative bas-reliefs – much like the Angkor Wat. They lead up to the third level with a central tower. The Bayon was intended as a definitive political statement declaring the shift of the ancient Cambodian people from Hinduism to Mahayana Buddhism under Jayavarman VII.

The pyramid temple of Baphuon was built by King Udayadityavarman II in the 11th century, before the city of Angkor Thom was established. It was originally designed as a Hindu temple dedicated to Shiva and the highest point of the temple has a single sanctuary that housed a linga or the phallic representation of Shiva. The temple is completely adorned with complex carvings and narrative bas reliefs of mythological events.

The Baphuon was eventually converted to a Buddhist temple and a huge reclining Buddha was added around this time, one of the largest in Southeast Asia. The sandy soil of Cambodia proved to be inadequate for the immense structure of the Baphoun. Large portions had already collapsed by the time it was converted to a Buddhist temple. The stones from the collapsed portion were utilized in the creation of the reclining Buddha.

The temple was on the verge of complete structural failure by the early 20th century and was taken apart for reconstruction before the Cambodian Civil War. The plans for reconstruction were destroyed by the devastating Khmer Rouge, which turned the temple remains into the world’s largest jigsaw puzzle. A more modern restoration project was implemented to restore the temple which took an astonishing 16 years to complete!

Terrace of the Leper King

The Leper King Terrace was built in the Bayon style under Jayavarman VII. On top of the platform is a nude statue (the original is at the National Museum of Phnom Pehn). The statute was named the ‘leper king’ because of the discoloration on it is reminiscent of a person with leprosy. The original statue has the name ‘Dharmraja’ etched at the bottom, the name by which Yasovarman I was known. It is speculated that Yasovarman I suffered from leprosy. Recent theories, however, suggest that terrace may have been a royal funerary site and the sculpture represents Yama, the Hindu God of death.

Terrace of the Elephants

The Phimeanakas or the Celestial Palace is a three-tiered temple that stands close to the center of a walled area that once housed the royal palace. This structure, like the Baphoun temple, was built in the late 10th and early 11th century, before the establishment of the Angkor Thom.

The original structure had a golden tower at the very top. According to legend, the nine-headed Naga (serpent) lived in the tower and would appear disguised as a  beautiful woman. The Khmer King would have to lay with Naga every night before he could join his wives. It was said that if the King missed even one night then a great disaster would befall his kingdom and if the Naga failed to appear, then the king’s days were numbered and he would die.