Rape? What Rape? Artworks Everyone Should See 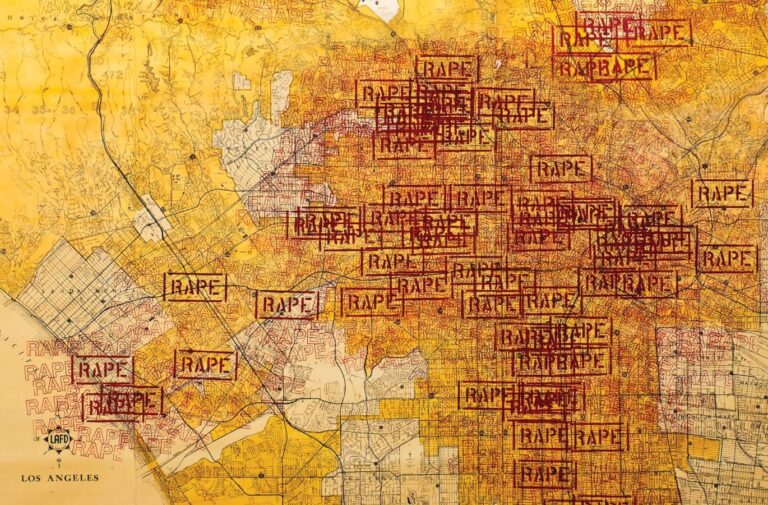 In October 2017, #MeToo movement was founded, with the hashtag spreading virally and women all over the world sharing their stories of experience of sexual harassment. Various artists, mostly women, have treated this subject in art and I think that everyone should see their work.

The Guerilla Girls are feminists and activist artists who anonymously (they wear gorilla masks during performances) expose gender and ethnic bias in politics and art world. The blue dots that cover the faces of all girls refer to the dot that in 1991 the TV networks projected over Patricia Bowman’s face to keep up the pretence of anonymity. Bowman testified during the Kennedy Smith trial in which she accused William Kennedy Smith of rape. He was acquitted despite the fact that three other women wanted to testify precedent assaults.

The title Rape seems not to derive from Degas himself but from scholars, many of whom believe that this painting is an illustration to the novel by Emile Zola Thérèse Raquin from 1867, in which two lovers kill the husband of the woman to find each other one year later totally overwhelmed by their crime. Others carefully suggest that Degas in fact did not like to make paintings that illustrated literature and that this painting was rather a study of nocturnal atmosphere and diffused lights. Whatever the truth, the painting remains one of his most mysterious works.

This painting was made in three different copies, each of which however inserting a femal body in the place of the face. Magritte is this way stating that women are very often perceived by men only as sexual objects without a face. The series refers also to his own biography, as he quotes the image that remained in his memory since age 14, when his mother was found dead in the river Sambre. Her body was naked, with a nightgown which was tangled around her neck. She committed suicide.

With her Three Weeks in May, Suzanne Lacy exposed the extent of reported rapes in Los Angeles. During the three-week duration of performance in May, 1977, Lacy everyday stamped new rape locations on a map, having obtain data from the Los Angeles Police Department’s central office. Each stamp RAPE was surrounded by fainter stamps marking the estimated unreported rapes for every one reported.

Bang Geul Han is an interdisciplinary artist born and raised in Seoul, who now is based in the US where she works with video, performance, and words. Her animation Through the Gaps Between My Teeth deconstructs the transcript of President Trump’s infamous Access Hollywood tape, to later use the letters from the text to cite numerous accounts of sexual assault which had been found by the artist on Twitter. The limitation in creating phrases (since every Tweet contained only the letters in president’s own words) leaves the text imperfect, which alludes to difficulties that women have to speak about sexual assault and be heard. You can watch the video of the installation on the website of the artist.