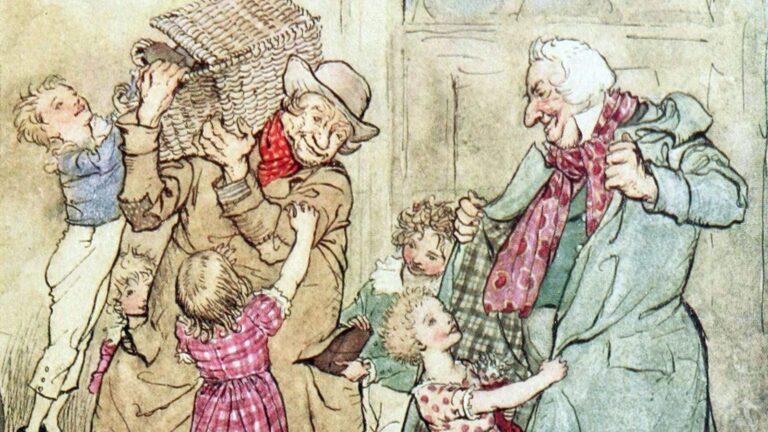 Have a nostalgic look at Arthur Rackham’s illustrations of A Christmas Carol by Charles Dickens in the British Library edition from 1915.

I have endeavoured in this Ghostly little book to raise the Ghost of an Idea which shall not put my readers out of humour with themselves, with each other, with the season, or with me. May it haunt their house pleasantly, and no one wish to lay it.
Their faithful Friend and Servant,
C.D.

And so have I, endeavored in a brief little post dedicated to the loved-by-all A Christmas Carol illustrated at the beginning of the 20th century by a well-known English book illustrator.

Arthur Rackham (1867–1939) was a leading book illustrator and one of key figures of the British Golden Age of book illustration. In his drawings, he combined watercolors with ink and pen, a technique he developed as a journalistic illustrator.

He provided images for a variety of books, one of which being a story of Scrooge, a wealthy but merciless man, who changes having experienced several ghostly visitations on Christmas Eve. Charles Dickens’s book sold out immediately when it appeared just before Christmas of 1843 and was subsequently reprinted, turned into stage plays, and even pirated!

This 1915 edition had monochrome and color pictures whose boldly inked outlines and color washes hinted at the Japanese woodblock prints popular during that time. Some books featuring his beautiful illustrations were considered luxury items and sold as Christmas gifts. Who wouldn’t like to find such a book on Christmas Day?

(…)it was always said of him [Scrooge] that he knew how to keep Christmas well, if any man alive possessed the knowledge. May that be truly said of us, and all of us! And so, as Tiny Tim observed, God bless Us, Every One!