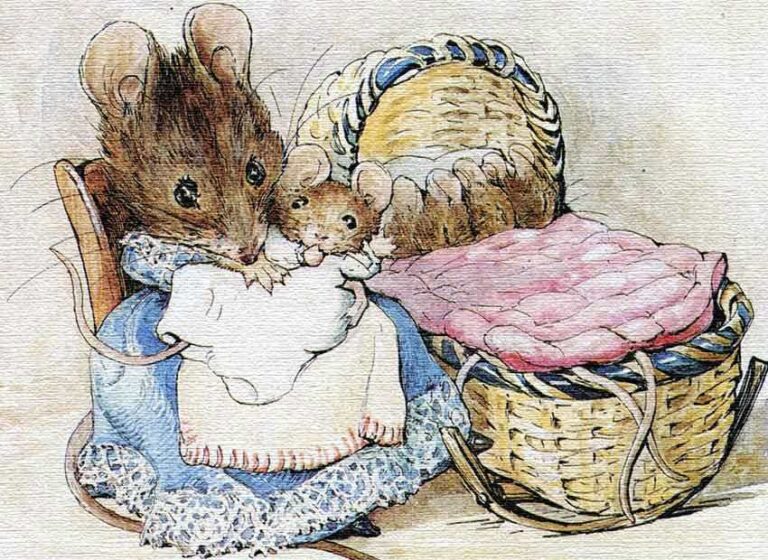 Beatrix Potter, best known for the charming tale of Peter Rabbit, inspired the minds of budding young novelists and illustrators alike. Her most distinguishable artistic traits are well known to be the whimsical anthropomorphism that her stories surround. Stories involving the mischief of a daring young rabbit or the simple pleasures of an old toad. A delicate symphony of illustration and well written literature.

Regularly, young Beatrix Potter would summer at the Dalguise House of Scotland. Situated on the beautifully picturesque River Tay, this location would contribute heavily to Potter’s literary and illustrative works. Enjoyed by adults and children alike, the inspiration to create her beloved short stories often came from this picturesque locale.

The classic illustration of little Peter Rabbit is the best example of Potter’s charming color-play. She depicts him standing among the shrubbery of Mr. McGregor’s garden, mischievously munching on stolen carrots. The clutches of Mr. McGregor don’t phase him – nor does the danger of being caught by a wandering fox. Brave, courageous, a bit cheeky – Peter Rabbit certainly isn’t depicted as a regular old bunny. For one thing, Potter keeps him warm with a delightful blue jacket. In her own words:

It was a blue jacket with brass buttons, quite new.

Clothing the animals she illustrated wasn’t simply an attempt by Potter to create an original character model. Anthropomorphism has a far deeper purpose than that – the blue coat coupled with the deep brown of Peter’s well painted fur creates familiarity for the reader of her books. In other words, Peter Rabbit becomes less of a mud burrower and more of a human being in animal form.

Many of her illustrations adopt a similar style, such as Jemima Puddleduck and her blue bonnet, or Mr. Tod and his tweed blazer. However, my favorite and perhaps the most human of all of these characters is Mr. Jeremy Fisher.

Jeremy Fisher sits atop a lily pad, fishing rod in hand waiting for the first catch of the day. As his name would suggest, Jeremy is fond of fishing and uses it as his escape from the hustle and bustle of everyday life. However the reason that Jeremy, in my opinion, is the most charming of all of Potter’s characters is not his fondness for angling. More so, it is Potter’s portrayal of Jeremy as a gentleman who enjoys the simpler things in life. No doubt, this is something that would have appealed to the more mature reader of the early 20th century.

Again, Potter demonstrates her ability to create an all too human representation of her animal characters. Jeremy wears the attire of an aspiring middle class gentleman. He sits on a lake (originally inspired by the River Tay but later revised to the waters of the Lake District) and fishes for his lunch. There is something very appealing about the simplicity of Jeremy’s life. This charm that may well have stemmed from a desire for escapism from the big city of London where the book was first published.

Whatever the reason, The Tale of Jeremy Fisher perfectly demonstrates Potter’s ability to write and illustrate children’s fiction that has the ability to win the hearts of both young and old readers alike.