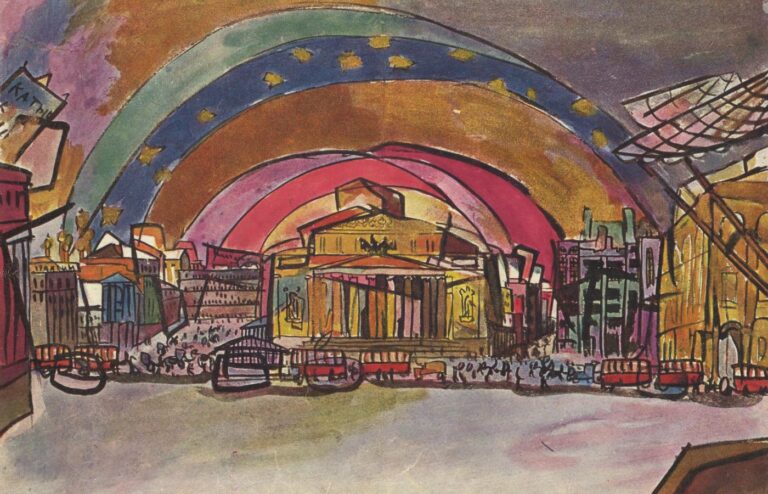 Recently I showed you views of typical wintery Russia by Korovin, which you can see here. Today we’ll see instead something out-of-ordinary. Although it’s always the same country, this time it’s seen in an avant-garde lens. I’m very curious which one you prefer: Korovin’s typical, or Lentulov’s Cubist Russia?

Lentulov was one of the foremost representatives of the Moscow School of Art, who first studied in Kyiv (now in Ukraine) and St. Petersburg, to then move to Paris in winter of 1911. There he studied Académie de la Palette and began working for the studio ran by one of the most important French Cubists of the time: Henri Le Fauconnier. Drawn to Orphism founded by Robert Delaunay, and naturally to Cubism, he hung out mostly with avant-garde artists such as Jean Metzinger, Albert Gleizes, or Fernand Léger.

Before travelling to Paris, though, in 1910 he became one of the founders of an avant-garde group called Jack of Diamonds, which exhibited artists expelled from the Moscow School of Painting, Sculpture and Architecture due to their “leftist tendencies” and foreign painters, mostly French Cubists. Other members of the group included, for example, Mikhail Larionov, Natalya Goncharova, or Pyotr Konchalovsky. The group functioned until 1916.

As you can see, Lentulov’s personal style combines the Cubist concept of space with the colours of Fauvism. Moreover, the added patterning drawns on ornaments of Russian folk art and it perfectly fits his depictions of various buildings in Moscow, which makes them appear fairy-tale-like and extraordinary. He had a great impact on the Russian Futurism and Cubo-Futurism, influencing such artists as Wassily Kandinsky and Kazimir Malevich, with whom he founded another group called Today’s Lubock (Segodnyashnii Lubok), which produced art satirizing Austria and Germany and basing its style on Russian folk prints- luboks.

After 1917 and the October Revolution, Lentulov actively participated in the building the new Russia. He designed in Moscow the city decorations for the first anniversary of the Revolution, painted monumental murals for cultural cafes as the Poets’ Café (1918), taught art and even helped found the Society of Moscow Artists in 1926, which reunited the old members of the Jack of Diamonds group.

At the beginning of the 20th century, Pablo Picasso created the famous Les Demoiselles d’Avignon. Georges Braque was immediately inspired and...