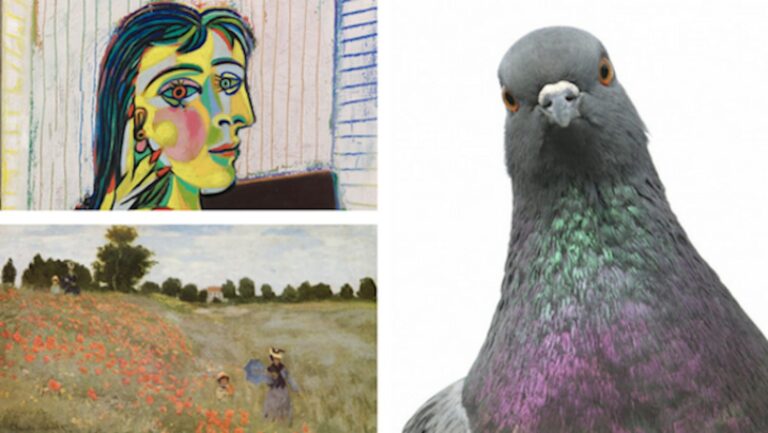 Have you ever wished you could teach your parrot or canary some new tricks? Clearly, the Japanese scientists – Shigeru Watanabe, Junko Sakamoto and Masumi Wakita from Keio University had the same idea. In a paper published in 1995 in the Journal of the Experimental Analysis of Behavior, they described how they trained eight pigeons to tell the difference between the paintings of Monet and Picasso(!). Setting aside the fact that even some humans can’t do that, the idea behind that research and its execution are quite fascinating. How on earth did they do that?

Firstly, the scientists trained the pigeons by showing them photos and videos of Monet’s and Picasso’s paintings. One group received food if they pecked on a switch when shown a Picasso’s  painting, the other when shown one of Monet.

Name the painter – Picasso or Monet?

The tested pigeons achieved an accuracy of over 90% in their reactions to a painter assigned to that group. Curiously, the results were not different when the paintings were shown in black and white or in color. The birds actually learned to recognize the style of each of the painters.

In a second experiment, new birds, once again divided into two groups. Now, they were shown paintings of Picasso and Monet, but were rewarded only when they reacted to a painting of the correct artist, rather than simply reacting to a painting as before. In that case, the results were just as surprising. At first sight, not the brightest sparks, pigeons recognized the correct painter in over 90% of cases.

And you thought that your dog knew cool tricks?

In case you want to find out about dogs in art, check out this article: “Puppies, Doggies And Pugs (For Dog Lovers Only!)“

An intellectual property lawyer, helping artists on a daily basis, an art lover and a serious foodie. If missing, look for him in the nearest museum or in the kitchen.