Madame de Pompadour As an Artist 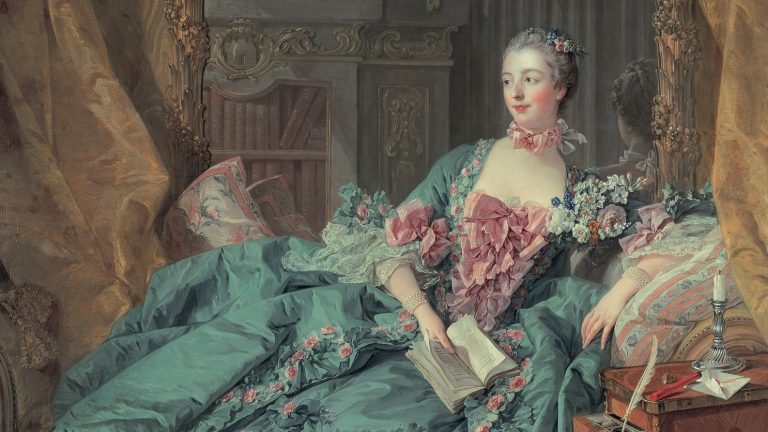 Madame de Pompadour was the most influential mistress of Louis XV. Even though having influence over a king was no small deal, there is more to De Pompadour than just that role. Her significance in 18th century France was also vital in the art world as an intellectual and a creative mind. A patron of the arts, the Marquise not only commissioned and collected works of art but also produced some of her own.

Jeanne Antoinette Poisson (1721–1764) became the royal mistress of Louis XV when she was 24 years old. Her official position as mistress lasted until 1751, yet she remained in the court and in favor of the King of France until the end of her life. Even after their sexual affair ended, she remained the king’s friend, confidante, and political advisor. Madame de Pompadour was not just an attractive woman. The role she occupied in the French court was obviously a sexualized one, but highly political as well.

More Than Just A Mistress

A well-educated woman, Madame de Pompadour was associated with French intellectuals such as Voltaire and Diderot. She was also a well-known patron of the arts, often commissioning works of art and supporting the production of porcelain and tapestry. The Marquise was portrayed by some of France’s greatest painters, such as François Boucher and Maurice-Quentin de La Tour.

In one of her famous portraits by Boucher, the objects around De Pompadour symbolize her knowledge, artistic interests, and patronage. In her life, she surrounded herself with expensive and fine works of art. By decorating and redecorating her houses, she was constantly buying furniture, tapestries, statues, ceramics, and many other decorative arts. The works of art she commissioned were to be displayed at the court and in her private collection.

Besides leading French artists, she also put her creative mind to work. Playing a musical instrument and drawing were some of the skills expected of women then (especially well-educated ones). She did etchings, practiced small-scale sculpture through gem cutting, and even acted (the King, in particular, enjoyed the plays she put on at the court).

In possession of the Walters Art Museum is the only full remaining copy of The Suite of Prints Engraved by Madame de Pompadour After the Carved Gems of Jacques Guay. The object was purchased from a Parisian book dealer by Henry Walters, founder of the museum, in 1895.

The leather portfolio has been recently rediscovered among the museum’s items by art historian Susan Wager. Holding 52 etchings, this rare set was created by Madame de Pompadour in the 1750s, and probably not more than 20 copies were produced. It was a sophisticated and complex project that combined numerous artists and artistic processes.

First, Jacques Guay carved an image onto a gemstone. Next, an artist—usually François Boucher or Joseph-Marie Vien—created a drawing of Guay’s carved gem. Pompadour herself then etched the drawing onto a metal plate, and a professional printmaker reinforced her etched lines with an engraving tool called a burin. Finally, an impression of the plate was made on paper to yield the finished print.

Jacques Guay, the artist who carved the gems, worked in the Marquise’s residence in Versailles. He carved the gems for her but also taught her how to do so. This project ended up being an important record of Guay’s gems, since most of his work is now lost. In the prints, the gems’ designs can be appreciated in an enlarged view and diagrams signal the size and type of the stones. 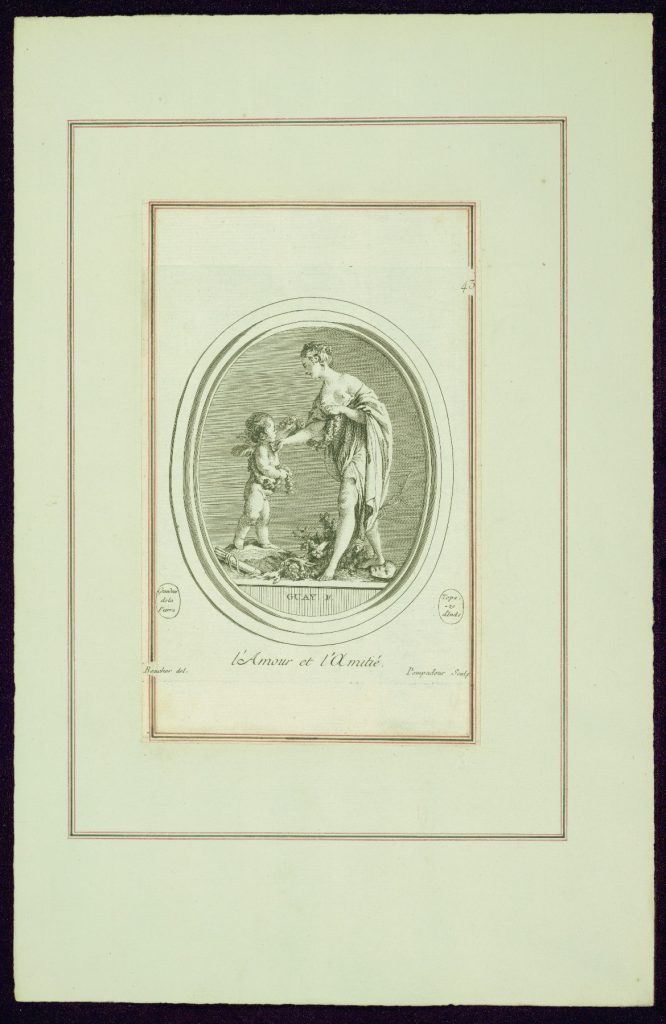 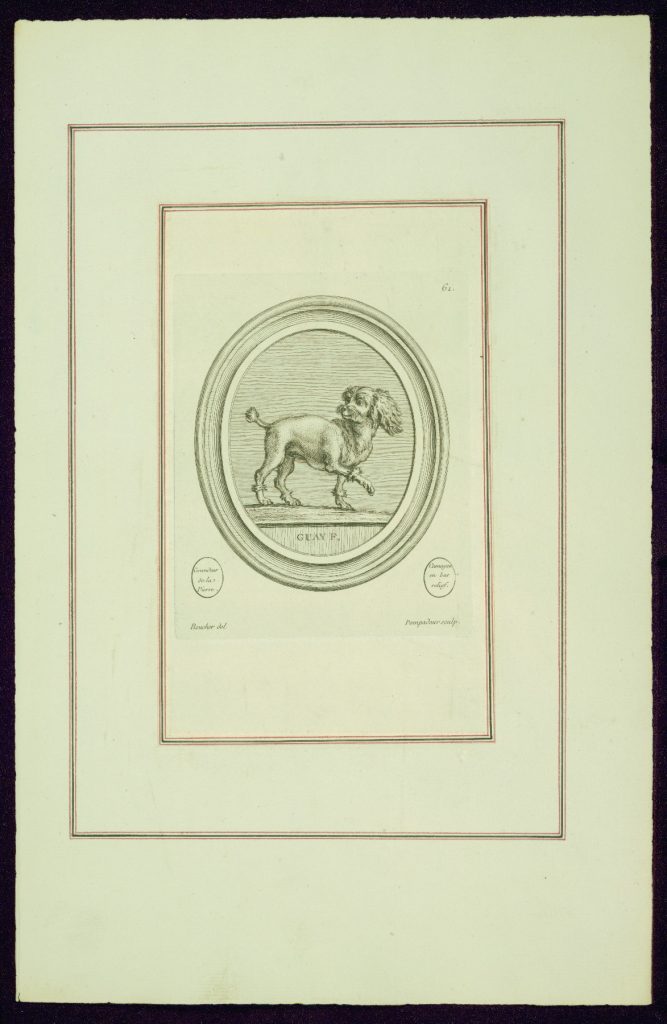 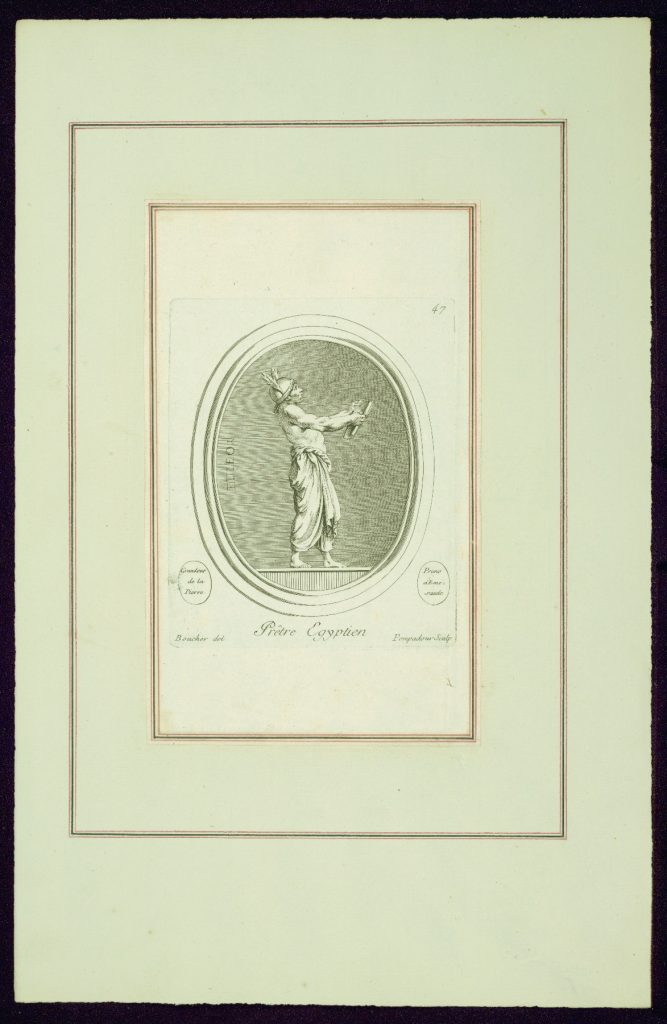 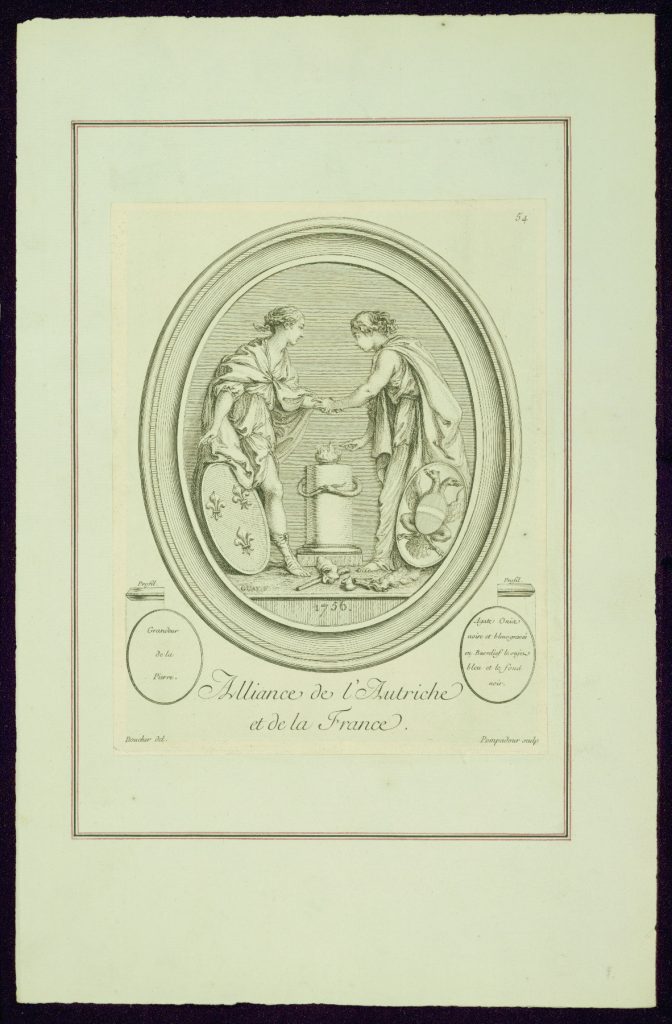 Designed to serve as Madame de Pompadour’s personal seal, this print shows Love encircling Friendship with a floral garland. The use of light and shadow here creates an illusionistic depth.

This print is the only record we have of a gem that is now lost. The cameo portrait of the Marquise’s pet spaniel captured the dog paused mid-trot, her head turned and tail raised. A fleeting moment that was carved on stone (a durable medium).

The Greek inscription under the figure means… well, nothing. It was invented by Guay to make the piece look like an antique. The main figure, though, comes from an actual relief at the Vatican.

Alliance of Austria and France

The allegorical cameo represented in this print was commissioned by the Marquise to celebrate the 1756 alliance between France and Austria. Some subtle but meaningful modifications mark  Pompadour’s etching of the gem.

While the agate cameo personifies France and Austria in a stiff form, the print of it portrays the two figures moving toward each other in unity.

Portraits of Monseigneur le Dauphin and of Madame la Dauphine

This print registers on paper a cameo that is a double portrait of Louis, prince of France, and his wife, Marie-Josèphe de Saxe. It also indicates the circumference, mineralogical type, and thickness of the stone.