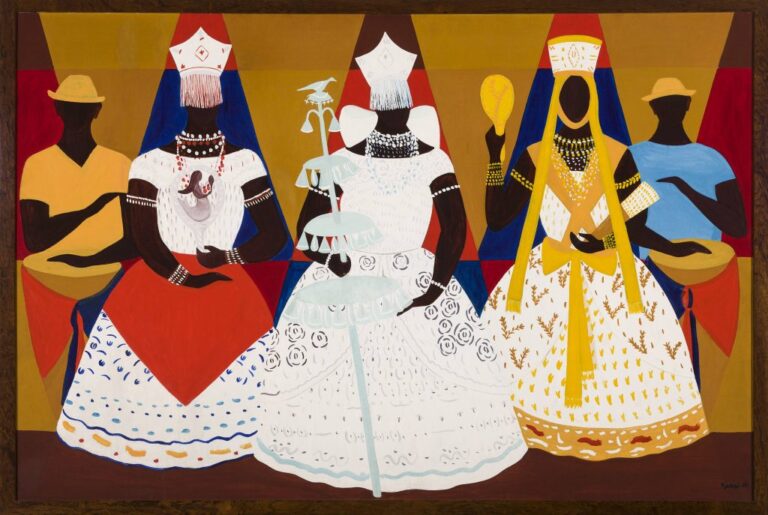 Djanira pictured a very unusual Holy Trinity made of three deities from the Afrobrazilian Pantheon. They are accompanied by musicians playing drums to call ancient spirits and gods for their appearance here and now, on earth, to help the living, to ease their pain and to increase their joys.

In the foreground, we see three orishas who are goddesses, holy spirits and fundamental figures in Candomblé. It is a religious tradition which combines African beliefs of Yoruba, Fon and Bantu. It was brought by the slaves to the Portuguese colonies and developed especially in Salvador, in Bahia state. Each orisha represents a certain force in nature and is associated with certain foods, colors, animals and days of the week.

Between 1516 and 1888, Brazil imported the majority of the slaves in the transatlantic trade. Only in the 18th century, around 1,7 million people were shipped against their will from Western Africa (mostly from today's Ghana, Nigeria, Angola, Congo, Guinea and Gabon). They represented different ethnic groups, languages, traditions, and religious beliefs. This cultural heritage survived centuries and is still alive in Brazil.

The first character on the left is Yemaya, in the middle there is Oxala, the last one on the right is called Oxum. Oxum (Oshun) is one of the most worshipped of the orishas. It's a deity of the river and fresh water, luxury and pleasure, sexuality and fertility, as well as beauty and love. The reference to Oxum can be seen in Beyonce's Hold Up video. The musician dressed in a yellow Roberto Cavalli gown opens the door letting massive water spill outside. Djanira also painted Oxum in a yellow dress. The goddess hails to the viewer with the left arm.

Yemaya, in turn, is often identified with Catholic Our Lady of Regla. Yemaya has maternal characteristics, she is a protective deity often depicted as a mermaid. She ris responsible for everything about childbirth: the conception, parenthood, child safety, love and healing. According to the myth, when her waters burst, they caused a great flood which created rivers and streams. It also says that the first mortal people come from her womb. Djanira painted her on the left, with a mermaid emblem on the chest, dressed with red accessories. Beyonce also played an hommage to Yemaya in her pregnancy photoshoot in 2017.

Oxala, in the center of the picture, resembles God the Father, the creator. He is considered to be the Father of Heaven and the creator of human bodies. He is the second son of Olodumare and was authorized by him to create land on the water under the sky. What is surprising, Djanira painted Oxala as a woman.

Djanira captured in this painting the custom typical to festivities in Bahia. For the Candomblé the music is essential. A role of rhythm and melody is to bring magic and spiritual forces to the room. The drums appease the orishas and hypnotize individuals participating in the ceremony. There are drummers shown in the background, who are playing for the goddesses.

The painting Três Orixás gives us a representation of ritual of Afrobrazilians celebrating their ancestry in a modern country, centuries after they were brought from their motherland to a new homeland.

Discover South American Art in the Museum of Solidarity “Salvador Allende” in Chile and in MnBA, Rio de Janeiro!