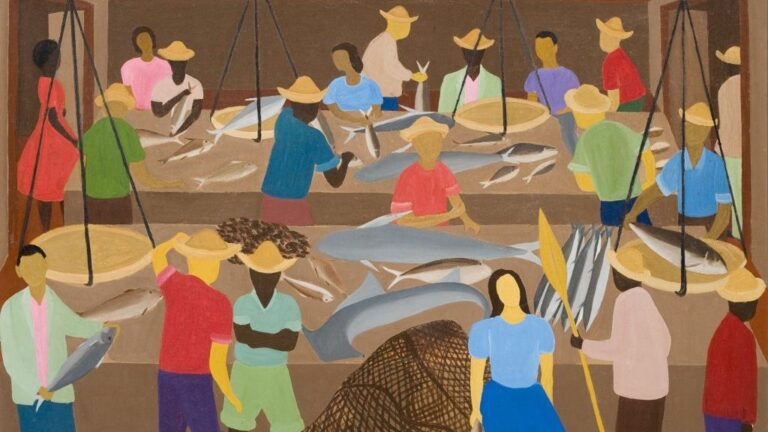 Djanira da Motta e Silva (1914-1979) was born in a very humble family, in Avare, San Paulo state in Brazil. She started to paint in her twenties when she was hospitalized due to tuberculosis. Before becoming an artist, she worked at a coffee plantation, then as a street vendor in Sao Paulo, and later as a pension manager in Rio de Janeiro. She created and owned this pension in Santa Teresa barrio. This was a temporary home for immigrant artists and writers, who later on inspired her to pursue a career in art.

Her talent was mostly self-taught, as she only received very brief education in 1940 at the Liceu de Artes e Oficios. During the forty years of creativity, she worked with different mediums: oil, tempera, woodcut, drawings, engravings, ceramic tiles, textiles-making tapestries. She illustrated books, designed mosaics, painted murals. She was very prolific. The last individual exhibition during her lifetime, organized in 1977, at Museu Nacional de Belas Artes in Rio de Janeiro comprised 200 works. The most recent show at MASP designed by curators Isabella Rjeille and Rodrigo Moura presented the most celebrated 90 works.

Her style was often branded as naive, primitive, and folkloric. Even though it was original and Brazilian in colors, topics, and sensibilities, we can see in it some inspiration from Pieter Bruegel the Elder, Fernand Léger, Joan Miró and Marc Chagall. It is easily recognizable: It is her way of grasping the surrounding world of a country that went through dramatic transformations in the second half of the 20th century.

Contrary to these changes, Djanira’s works are immobile, flat, geometrized, still and resembling folk paper cuts. They are vibrant and bold, because of the colors used. They are reduced, distilled to the most basic elements of the natural forms. At the same time, the artist seems to be considerate and gentle with the subjects she portraits and immortalize on the canvas. There are no caricatures and disfigurations in her vast body of work.

Djanira was always connected to her origins, touching on the topic of the regular, daily life of common Brazilians, their work, customs, and festivals. As she once said: “Everything I am, I owe to the people. I do not abandon my common roots as a woman and as an artist.”

She was deeply religious and became a lay nun at the Third Order of Carmelites in 1963. She was also profoundly preoccupied with social justice, so she joined the Brazilian Communist Party and she visited the Soviet Union. Somehow these two realities were not contradictory or excluding for her. She explained it once:  “Do not misunderstand me, I am for democracy, nationalism, and the self-determination of the people, and I am anti-imperialist, against any state intervention in culture, and I practice the Catholic faith.” Many of her works depict religious themes, figures, and holidays, whilst others show industrial workers, factories, and mines.

In each work, Djanira offers a unique perspective on all things Brazilian. She gives us some snapshots of everyday life, joys, the sorrows of mundane moments typical to the working class. She also documents different ethnic customs of Afrobrazilians and of Indigenous tribes. But in her art we can also find a universal concern for the anonymous masses, people without unique facial features, without individual identities, defined by what they do and where they are in the social contexts and bigger structures.

Often the works of Djanira are populated by figures with no facial features. They do not have a specific identity or unique lives, no one can recognize them as their friend or family member. They are humans, but they are strange to us. We only see them as fishermen, footballers, plant workers. We do not know what they think, feel, or perceive, just what they do.

For the brain, a face is like a puzzle, it always looks for the eyes and facial expressions for the clues about emotions, personal traits, and character signs. By removing this, Djanira creates disturbing pictures of modern beings interlocked in social, repetitive interactions. They are distant, removed, placed by her to make a scene, and they are not its protagonist.

In the period of 1940-1979, when Djanira kept her art practice, Brazil passed through rapid industrialization and urbanization. The country transformed into mass society, governed in non-democratic ways, by a dictator (Getúlio Vargas, 1937-1945) and military juntas (1964-1985). Djanira painted the new plants and their employees as well as still present and resistant to changes, as well as craftsmen, farmers and plantation laborers.

She noticed the social and economic processes reconstructing communities in her motherland. She also depicted more human moments of leisure and rest typical to city life.

Djanira travelled extensively, visiting different regions of Brazil, and from her trips she brought vivid memories of religious and ethnic customs. She translated them, sometimes in very psychedelic and atypical portraits of saints and deities, revered by Brazilians in their syncretic cults.

These works have anthropological meaning: They study the symbols, colors, and traditions of indigenous, African, Portuguese cultural footprints and its impact on the diversity of modern Brazilian culture.