When the Inquisition Met Nude Maja 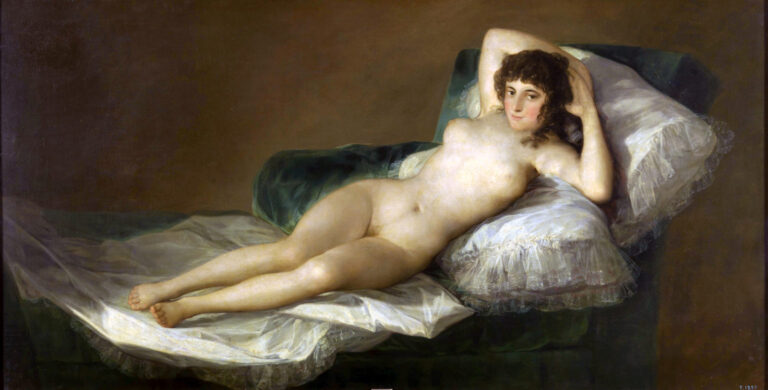 Which one do you prefer?
The Nude Maja or The Clothed Maja?

This question might have been asked by the painter Francisco Goya when he completed both paintings and showed them side by side to the commissioner, Manuel de Godoy, Prime Minister of Spain (1792 to 1797).
Maja is not a name of the girl, as I used to think, but a general term describing people from the lower class of Spanish society in the late 18th to early 19th century, especially in Madrid. They were one of the favorite subjects of some 19th-century Spanish painters because they had very characteristic elaborate outfits and particular manners, as they often were described as cheeky…

The Nude Maja came first: Prime Minister commissioned Goya for a painting of a naked girl to hang it in his private collection. He had a separate cabinet reserved for nude paintings only, as he liked to collect “questionable pictures”, such as Velazquez Rokeby Venus (in other words, he liked to look at naked ladies). One of the accounts says that the Clothed Maja was placed in front of the naked one and in order to reveal it, one had to pull a cord. Godoy retained the nude girl for six years before it was discovered by investigators for the Spanish Inquisition in 1808.

The Inquisition confiscated all the works from the collection and brought Godoy and the curator of his collection, Don Francisco de Garivay, before a tribunal. They were forced to reveal the artists whose works were “so indecent and prejudicial to the public good.” Goya was in real trouble. How did he escape prosecution? Goya said that he had only followed and emulated traditional painters such as Titian (and his Venus or Danaë) and Velázquez. Inquisition couldn’t say a word because both the church and the court admired Titian and Velazquez and did not find anything offensive in the Rokeby Venus.

Who was the model for these paintings? Most proabably it was Godoy’s young mistress Pepita Tudó, although some say that Goya painted his own mistress or moreover, he mixed the features of several ladies. Whoever she was, she had an enormous influence on Wester art to follow as it was the first instance in which pubic hair was painted in a non-prostitution context, and the model challenged the viewer with her direct gaze.Any associations guys? Yes, Manet’s Olympia is likely to be inspired by The Nude Maja.