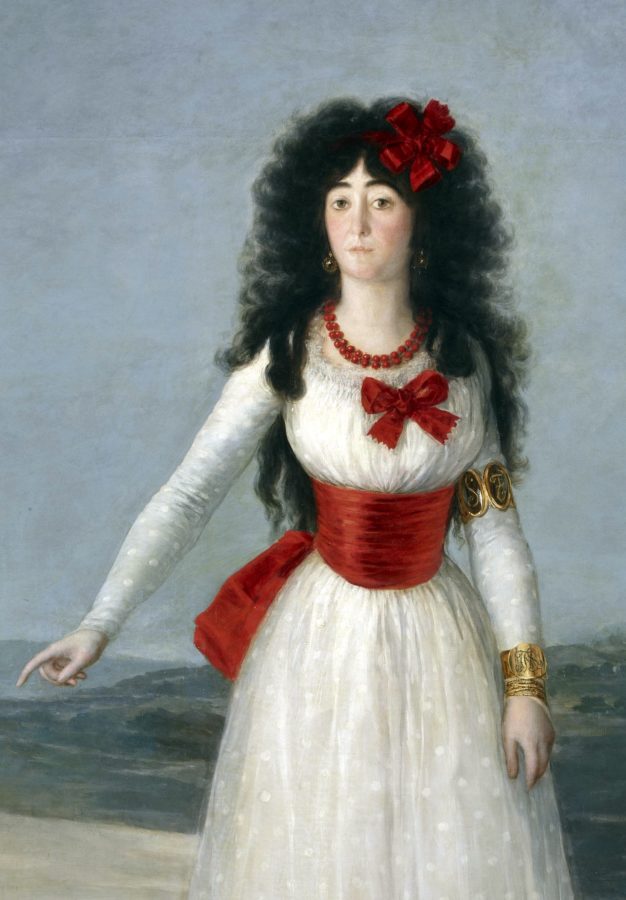 She is known from numerous paintings created by Francisco de Goya. Especially from these two, where on one she is lying fully dressed, on the other – fully naked.

The relationship between her and Goya was thought to be one of the most romantic love affairs in the history of Spanish art. Although the liaison between the rough Francisco de Goya and the beautiful, capricious Duchess of Alba, the grandest grandee in Spain, has now been described as a legend it is still a very interesting story.

For example, on one of the formal portraits of the duchess, the duchess wears two rings, bearing the names Alba and Goya, and points to the artist’s signature at her feet.

The couple met when the duchess was a teenager, and they came to know each other well. Goya made many visits to her palaces to paint. In 1739, her husband, the duke, died aged 39. Then she became the wealthiest woman in Spain. 34 year-old Alba radiantly beautiful and at the peak of her social success, retired to the family estate in Sanlucar de Barrameda, near Cadiz, and invited Goya. Goya was fifty, deaf, married, and still not fully recovered from his debilitating illness of 1792.

He stayed from July 1797 until the following March, and produced his most intimate portraits of his patron – taking siestas cuddling her adopted black daughter and teasing her maid. Two years later, the “Majas” appeared.

The Duchess clearly charmed Goya during one of their earliest encounters, at which she asked the artist to apply her makeup. Goya wrote in a letter, “the Alba woman, who yesterday came to the studio to make me paint her face, and she got her way; I certainly enjoy it more than painting on canvas, and I still have to do a full-length portrait of her”.

The Duchess died under somewhat mysterious circumstances in July 1802 at the age of 40. Although her death was ostensibly due to tuberculosis and a fever, more colorful scenarios have been suggested over the years, among them a theory that she was poisoned.

At the end, we can share the full name of the Duchess – are you ready?

True story. I wonder if she remembered all these names!