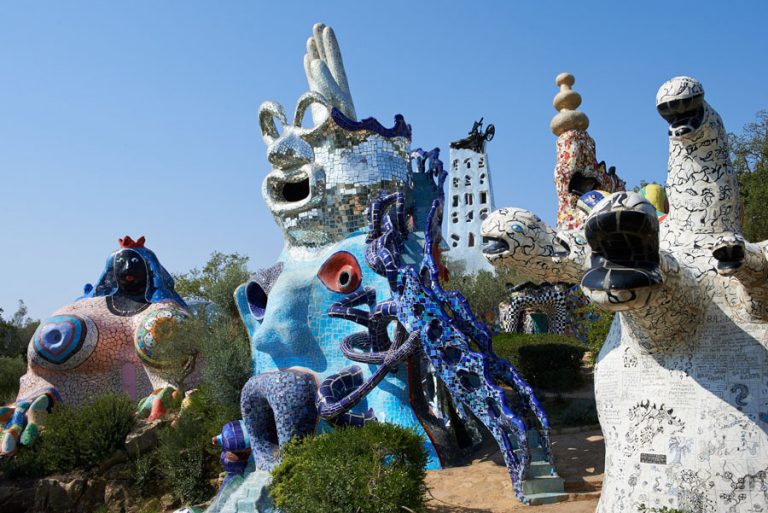 Inspired by Antoni Gaudí’s Park Güell in Barcelona, Parco dei Mostri in Bomarzo, as well as Palais Idéal by Ferdinand Cheval, the French-American artist Niki de Saint Phalle, decided to create her own mystical garden, Giardino dei Tarocchi, or the Tarot Garden, in the beautiful Tuscan city of Garavicchio. It is full of extraordinary sculptures resembling monsters and inspired by Tarot cards. The Tarot Garden came to be a refuge for Saint Phalle to heal from her childhood trauma.

Niki de Saint Phalle (1930–2002) was a French-American sculptor, painter, filmmaker, and also a model. She is considered one of the most famous female sculptors and the only female member of the Nouveau Réalisme movement, which included artists such as Arman, Christo, Yves Klein, Jean Tinguely, Jacques de la Villeglé, César, and others. For a long time she hid a heavy trauma from her childhood, she suffered years of sexual abuse from her father which began when she was only eleven years old. In 1994 she revealed her story of childhood abuse in an illustrated memoir Mon Secret (“My Secret”). Her adulthood was marked by mental distress and manic episodes. At the age of 23, Saint Phalle was sent to a mental clinic in Nice, where she received electroshock and insulins hock therapy.

Artistic creation helped her get out of it and, encouraged by her psychiatrists, she devoted herself completely to art. Despite this terrible wound, she would become an indestructible, admirable, rebellious, independent woman able to translate her pain into art. This is where her career as an artist began. Through painting and sculpting, she explored the pathways of her soul and ended up finding herself.

She became famous for her often violent color-shooting performances named Les Tirs. She would fire a rifle at assemblages of knives, scissors, eggbeaters, and baby-doll arms—the detritus of domesticity—which she had embedded in plaster, along with bags of paint and the occasional tomato. When the bullets hit, the art started “bleeding”. Also one of these paintings was bought by Robert Rauschenberg.

Thus, after her performances, she focused on a issues of femininity in her art. She created a temporary, indoor, monumental installation for the Moderna Museet of Stockholm in collaboration with her second husband, the famous Swiss kinetic artist Jean Tinguely. She named the sculpture Hon, which in Swedish means “She”. This colorful and gigantic sculpture of a pregnant woman, laying on her back had a door-size opening between her legs, through which the visitors could enter.

The next step of her transition to more colorful art is her monumental relief sculptures called Nanas, which are the perfect example of how she made her art an ode to femininity, both sensual and conquering, while denouncing conventions and conservative stereotypes against women.

However one of the most important, comprehensive, and recognizable works of Saint Phalle is certainly the Tarot Garden or in Italian – Giardino dei Tarocchi. It is a large sculpture garden containing twenty-two extraordinary sculptures and numerous other works ranging up to house-sized creations. They represent her idea of the greater mysteries of Tarot. Art, as she believed, returned her the sanity, and thus she wanted to make a monumental sculpture garden that would, in turn, heal others.

It’s my destiny to make a place where people can come and be happy: a garden of joy.

It all began in 1955 during a trip to Spain, where Niki de Saint Phalle discovered the work of Antoni Gaudí and she was strongly influenced by him. In particular, the Park Güell in Barcelona is of great importance in her decision to build a sculpture garden, because she used different materials and found objects as essential elements in her art.

Another influence was the Parco dei Mostri, in the Tuscan city of Bomarzo. Five years later Saint Phalle visited Ferdinand Cheval’s Palais Idéal with her husband Jean Tinguely. Cheval, originally a postman, had built a palace in Hauterives (Drôme, central France) following the images of his naive imagination.

Saint Phalle’s same imagination and expansive vision was the fuel for her to then create her own magnificent sculpture garden, the first to be created by a woman.

In 1978, Saint Phalle started to lay out her sculpture garden in an abandoned quarry in Garavicchio, Tuscany. In 1980, together with her team, she began building the first architectural sculpture in the garden.

She hired locals with little experience to help her cover the structures with plaster and, eventually, mosaic tiles. As the project progressed, Saint Phalle started taking lessons in the Italian language, so as to better communicate with local workers. The second crew member she hired was Ugo Celletti, a 50-year-old part-time postal delivery man, who discovered a love for mosaic work on the project. He would work on the project for 36 years and recruit his nephews to join in. Some of his family members are still involved in maintaining the site.

The garden became a construction site in which various workers, artists, and craftsmen participated, according to a collective spirit that has always characterized Saint Phalle’s creations. She also invited artist friends from Argentina, Scotland, Holland, and France to help work on the sculptures. Over time, Saint Phalle worked with dozens of people, including architects, ceramicists, iron-workers, bricklayers, painters, and mosaic artists.

The first sculptures to be built in situ were The Empress, The Popess, The Magician, The Sun, and The Tree of Life. Then she created The Babel Tower, The Castle and The Justice (which is a direct response to Tiguely’s sculpture of injustice). Walking downhill along the path that leads away from The Empress, the visitor is confronted by a voluptuous golden skeleton, a sculpture representing Death riding a blue horse over a mirrored green sea, from which disembodied arms stretch up to cling to the world of the living.

There are snakes everywhere in the park, and also in other of Saint Phalle’s works. They are emblems of a childhood episode that she described as “the summer of snakes”, referring to her traumatic childhood experience.

Some of the larger sculptural figures feature large openings that visitors can walk through. During the construction of the garden, the artist herself lived for about seven years inside the sphinx-like Empress starting in 1983. On the second level, her bedroom was inside one breast, and her kitchen was inside the other. Meanwhile the ground floor contained a large mirrored space with a mirrored dining table where she would serve lunch to workers and artists, beneath a chandelier Tinguely had made out of a cow skull.

Other collaborators who specialized in ceramics and welding were housed in the interior sculptures of Saint Phalle, during the site’s construction. During this period, Saint Phalle dedicated almost all of her time to living and working in the garden.

The Tarot Garden was under development for almost 30 years, and $5 million was spent constructing it. Also, the Foundation of the Tarot Garden was established in 1997 and the garden officially opened to the public on May 15th, 1998. The completed garden site covers about two hectares and the tallest sculptures are 15 meters high.

75,000 people visit the garden every year, most of them families with children, who roam around or scramble over the statues, dazzled by their size and their wildness. Saint Phalle’s friend, architect Mario Botta built a protective wall resembling a fortress and a gateway at the entrance to the garden, thereby marking a distinctive separation from the outside world.

Making the Tarot Garden cost Saint Phalle a great deal: her health, decades of her life, millions of dollars. To Saint Phalle, the Tarot Garden was to be an Eden of art and magic. To the local gentry, the garden was an act of vandalism. However there was little they could do besides gossiping about the “madwoman and her monsters.”