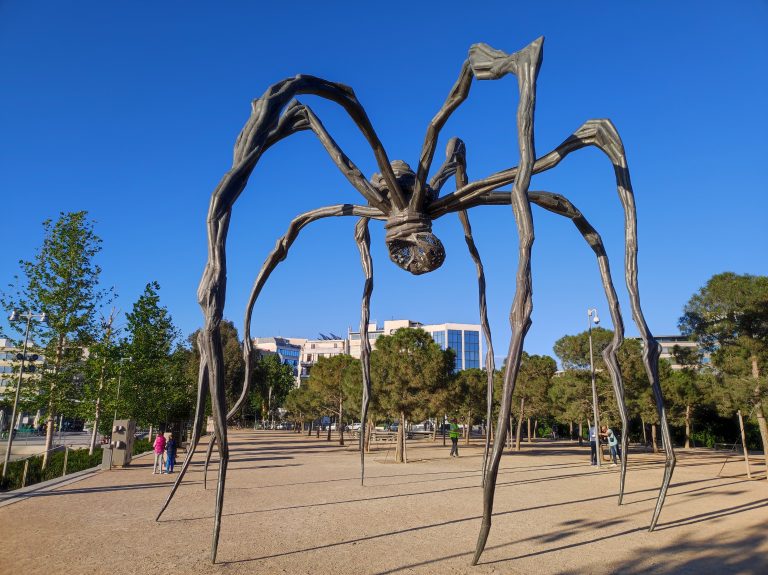 Maman is one of the most iconic sculptures ever created. Its dimensions are monumental, and it can only be installed either outdoors or in an industrial building. The impressive spider stands high above the ground on eight tall and thin legs, allowing the viewers to walk underneath and around it. Louise Bourgeois made the powerful sculpture for Tate Modern in May 1999. The whole concept behind this installation was to showcase the different stages of motherhood, a central theme in Bourgeois’ work.

For the next months, until November 6th, 2022, Maman will be at Stavros Niarchos Foundation Cultural Center (SNFCC) in Athens, Greece.

The giant spider is a regular motif of Louise Bourgeois. She created her first spider in 1947, in a modest ink and charcoal drawing. In 1994, she recreated the design using red ink and crayon. However, this spider had only four legs, stemming from the lower body of the spider. Two of them are very emphasized. 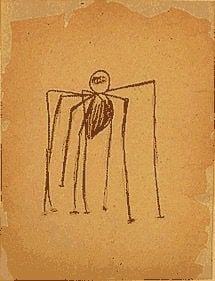 Louise Bourgeois created the first spider in a 1947 simple drawing.

The next time Bourgeois drew a spider was in 1994. Even though the design is minimal compared to that of 1947, it gave the base for the first spider sculpture.

Later that same year, Bourgeois created the first spider sculpture, using found objects and geometric forms. The body of the spider consisted of a glass jar with a round base that contained a blue liquid. The jar hung under a globe made of steel. Both of them were supported by steel tube legs, which bent at specific angles in order to hold the spider’s body a meter above the ground.

As aforementioned, Maman is a sculpture with enormous dimensions. To be precise, it is 9.2 x 8.9 x 10.2 meters and weighs 3,658 kg. The core body and the legs are made of steel and bronze. When standing under the spider, the viewer can see its belly area, which has 17 white and grey eggs made of marble. They are all kept together and protected in a meshed sac. Irregular and narrow ribs provide the mesh with support. The ribs are also a continuation of the ribbed spiral, which hugs the upper body and the legs of Maman. In addition, there are nipple nubbins emerging from the mesh, which are disturbed by holes. The holes have various forms, but they are mostly diamond-shaped, circular, and triangular.

Maman was put on the bridge to overlook three tall towers made of steel, with the titles I Do, I Undo, and I Redo.

Bourgeois created the legs so they look like columns of a Gothic cathedral. The overall design gives the viewers a feeling they are in an open church. The white and grey marble eggs are a reference to the Cell (Three White Marble Spheres), another artwork by Louise Bourgeois. In the Cell, we can see a white, small sphere made of marble snuggling between two larger ones.

What Is the Meaning of Maman?

Maman is the French word for mom, the word children use to call their mothers. The name underlines the dynamic contradictions of the mother’s role in every child’s life, and in this case, the artist’s. Moreover, to accompany the sculpture, Louise Bourgeois published nine etchings, entitled Ode to My Mother, which explain why the spider is a maternal figure- her own mother as a matter of fact. Nevertheless, this is not the only meaning of the sculpture. It also stands for the artistic process in general, which the artist understood as those of a spider. Bourgeois believed that creating an art piece, such as a drawing, was like giving off a substance, a secretion, just like a thread of a spider’s web.

Yet the spider has always been a symbol of fear, revolt, and even death if one thinks of a black widow spider. The gigantic arachnid is also sinister and menacing. It even brings back memories of pain and nightmares. Louise Bourgeois treated the creative process also as a means to deal with past traumatic or painful experiences. For example, she was a premature baby, delivered on Christmas Day. In addition, she lost her mother when she was 21 years old, an experience that shook her to the core. So, Maman depicts the artist’s horror when she lost her mother, but also the emotional veil of motherhood in all its nuances.