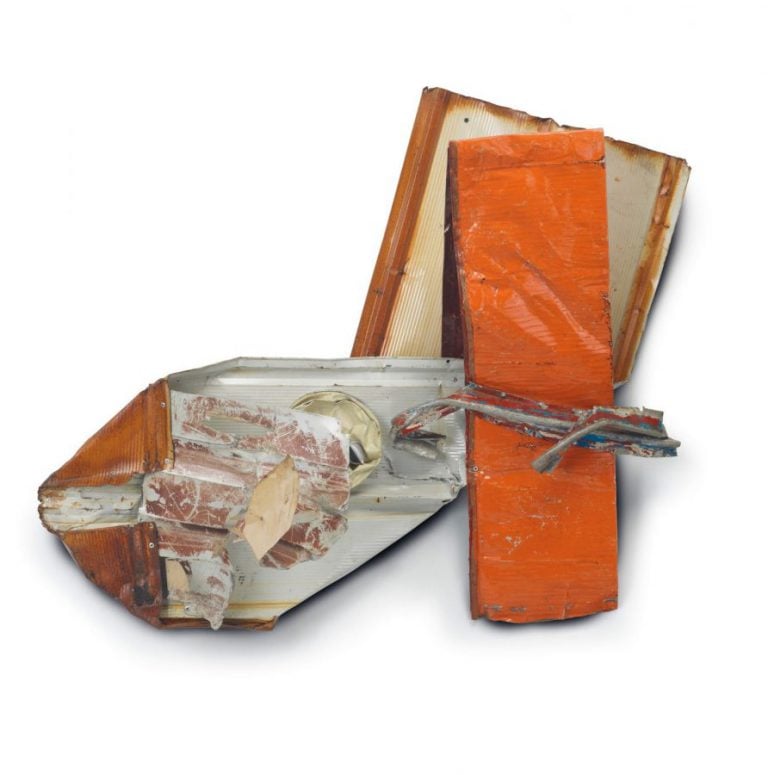 A selection of late works by American artist Robert Rauschenberg is the subject of a fascinating new exhibition at London’s Bastian Gallery. Opening on 13th January 2021, the show features a range of Rauschenberg’s innovative metal assemblages and printmaking experiments. Surpassing his initial triumphs, the Bastian exhibition contains Rauschenberg pieces created during his advancing years. Completed in a secluded retreat on Florida’s Captiva Island, much of this display will highlight Rauschenberg’s prolific output from the late 1970s onwards.

Rauschenberg’s reputation as a major artistic force is certainly enhanced by this group of works that stretch well into the beginning of the 21st century. Hopefully, it will encourage a clearer historical view of an artist who is generally positioned in the gap that bridges Action Painting and Pop Art.

Rauschenberg and the Bastian Family

After efforts to keep gallery engagement active during the Covid pandemic, gallery director Aeneas Bastian sees their New Year exhibition as a tentative return to enjoying more physical encounters with art. Also, highlighting this later period of Rauschenberg’s life has enabled him to explore his own family’s relationship with this particular body of work. The Bastian Gallery was first established by his parents in Berlin over thirty years ago, and they visited Rauschenberg on Captiva Island when Aeneas was a young boy.

The Bastians were able to appreciate Rauschenberg’s self-imposed isolation in a haven far removed from the distractions of New York. Aeneas himself recalls exotic birds and swamp-dwelling crocodiles in the National Park. A long drive to a remote area revealed the artist occupying pavilions and workshops with a few studio assistants. Fondly remembering Rauschenberg as very kind, Aeneas most strongly recollects the magical haven in which he worked and resided. It wasn’t one place, but a collection of separate creative spaces; an arrangement of constituent parts that mirrored Rauschenberg’s own unique artistic practice.

Included in the Bastian exhibition are excellent examples of Rauschenberg’s printing experiments with solvent transfers. Enabling him to create phantom traces of photographs and magazine clippings, lighter fluid or similar chemical substances were employed to slacken printing inks and release their ghostly visuals. Abandoning his previous methods using silkscreen processes, Rauschenberg was able to bring flexibility to his collage work. Achieving a fresh immediacy in his new surroundings, Award (1979) and Flue (1980) are prime examples of this technique. Whilst they provide an evident link with previous assemblages and combines, these works are imbued with vivacity and lightness common to Rauschenberg’s time on Captiva.

Rookery Mounds – Masthead from 1979 contains delicate shades of soft color and serves as an early example of Rauschenberg integrating his own photography into collage compositions. Captured on a trip to Fort Myers, these images maintain typical Rauschenberg structuring schemes that contrast natural and geometric forms. Visuals containing organic fauna and swishing window curtains are juxtaposed with a grid-like pattern, neatly binding the print’s layout. What appear to be the sharp lines of a melting block of ice negotiate with the sturdy angles of wooden panes and mundane implements. The whole framework is a montage of random casements containing various snapshots of everyday life, a system that can be detected throughout Rauschenberg’s body of work. It is an arrangement that can also be alligned with his array of workshops on Captiva Island; a series of isolated elements linked through an intimate exchange with invention and experimentation.

Perhaps the most startling works in the Bastian exhibition are a series of Rauschenberg ‘Glut’ sculptures. Assembled from collected objects whilst journeying across his native Texas, Rauschenberg transformed discarded junk into stirring effigies of industrial decline. It is difficult to identify the bits and pieces gleaned from automotive parts and gas station signs. Blended together they are transformed into discarded totems of dispair, ambivalent contraptions with no obvious purpose. In fact, Rauschenberg continues to explore questions first posed by Marcel Duchamp, his use of ‘ready-made’ articles undergoing a similar modification when placed in a gallery setting.

Rauschenberg’s ‘Glut’ sculptures echo the surplus Texan oil made redundant during the recession in which this series emerged. As we witness Rauschenberg’s magical alchemy, excess and waste is converted into new shapes and meaning. Perhaps this is an underlying theme informing all of his art. The mass produced items of today become the debris of tomorrow. It is the choice of creativity to reintegrate such litter into valuable property.

In a further challenge to his prevailing techniques, Rauschenberg’s latter years saw his curiosity extended to modern printing methods. Preparing digital copies of his own photographs enabled him to employ vegetable dyes and water for his image transfers. Once again, disparate fragments are rearranged to be reframed in a celebrated, raw reality.

Revealingly, Rauschenberg’s artful adjustments to the pre-existing materials at his disposal became tagged as ‘puns’ and ‘short stories’. This became a mode of reporting that transformed meaningful fragments into symbollic riddles or conceptual play. For an artist who struggled with conventional approaches to language (Rauschenberg was dyslexic), redefining standard rules in the form of anagrams or teasing puzzles proved to be effective games to joyfully confuse his audience.

Viewer interaction is an essential element of Rauschenberg’s art and our relationship with his work is a continuation of his own personal collision of challenge and disruption. What we take away, we seize as consumers. He has re-sold us what we already own. But we aquire possession on unique terms that relate to our own investment in the world. Invest in a visit to this exhibition, you’re sure to come away with something worthwhile.

More information about Bastian Gallery can be found here.