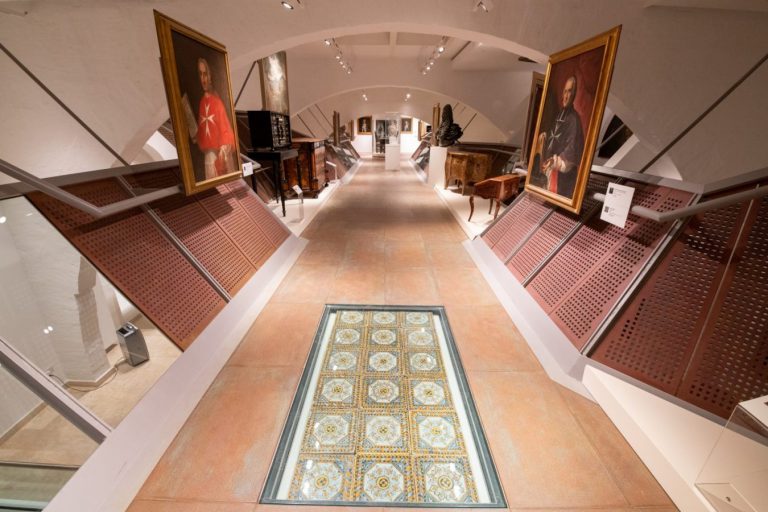 MUŻA, The Malta National Community Art Museum opened in 2018 in the capital of the island, Valletta. It forms part of Heritage Malta, the national agency for museums, conservation practice, and cultural heritage.

MUŻA – What Does It Mean?

The chosen name ‘MUŻA’ stands for the project vision – an acronym for Mużew Nazzjonali tal-Arti (Maltese for ‘National Museum of Art’). MUŻA is also the Maltese word for inspiration, besides being a clear reference to the muses that were the mythological figures from Classical Antiquity inspiring creativity. MUŻA seeks to push the limits of the traditional museum by rethinking the role and significance of a museum in the community.

Not a Typical Museum

MUŻA does not adopt the common museum model of being a collection of displayed artworks organized chronologically. Artifacts are selected on the basis of four narratives related to the history and identity of Malta, therefore fulfilling the institution’s role as a national museum. The four narratives are Mediterranean, Europe, Empire, and the Artist. By using narratives, MUŻA aims to empower participants to experience, engage with, and contribute to the narratives to the level they feel comfortable with.

Each of the four narratives is made up of a number of galleries that have a theme related to the history and development of art in Malta. Experiencing the museum is similar to visiting a number of small exhibitions which build upon each other, while a chronology is implied between one narrative and another.

MUŻA’s narratives can be appreciated on their own, sequentially, or in reference to each other. A visitor, or participant, can choose to absorb all provided information and appreciate the storylines presented by the smaller galleries. Alternatively, a visitor can choose to simply ‘browse’ through the artworks on display which are exhibited in a non-conventional manner through the use of glass and wooden plinths and showcases acting as dividers. This makes for a pleasurable walk-through and concealed displays that you encounter as you stroll through the museum.

MUŻA issues a regular call for exhibitions and artists in residence, and organizes a stimulating yearly calendar of temporary displays. Applicants are encouraged to create proposals that interact with the concept and collections of the museum and that engage the community.

The museum occupies the Auberge d’Italie, the former base of the Italian knights of the Order of St John. It was completed by 1629 and was subject to many renovations to adapt to various changing functions over time. The latest function, that of Malta’s National Community Art Museum necessitated thorough conservation and restoration of the building with modern interpolations that still respect the original features of the architecture.

The open spaces upon entering the museum, consisting of a spacious courtyard and wide corridors with high ceilings, are inviting and are used for temporary displays and installations. The museum shop with MUŻA- branded products, and the restaurant with artwork-inspired dishes, make for a holistic immersion into the artistic environment.

The display on the first-floor corridors of the museum is dedicated to the Mediterranean narrative, revealing the artistic ideas that reached the Maltese islands via the Mediterranean Sea, which connects them to Europe and North Africa. Therefore, this storyline presents the multiple connections which define Malta’s Mediterranean identity.

Malta’s Mediterranean identity has a strong religious imprint that inspires ritual. It connects in varied ways to the Mediterranean classical tradition of Greece and Rome and manifests itself in the beauty of objects with purpose used in everyday life.

Its inescapable geography meant that the islands’ exposure to different cultural influences, particularly the classical traditions of Antiquity, continued to influence the various artistic styles that reached and took root in Malta.

The island’s Mediterranean identity has a strong Christian imprint demonstrated through ritual enacted through the support of religious paintings, sculptures, ecclesiastical objects, and items of devotion.

The Mediterranean identity also comes to the fore through objects that are pleasing to the eye while also of use in everyday life. These include maiolica pharmacy jars and domestic furniture pieces, which, after centuries of being used for their original purpose, have now become treasured objects in private collections and in museums. Their original function has now been replaced by a new one which is that of enriching cultural heritage.

The Mediterranean narrative is very strongly focused on Medieval and Renaissance artifacts but also makes connections to items of later centuries, leading up to contemporary art. This serves to show how the influences that permeated Malta’s artistic traditions survived throughout the years.

All of Europe on One Island

On the first floor, a number of halls focus on Europe, mainly the 16th to 18th centuries when the Order of St John governed Malta.

Works of art by European artists arrived on the island through the broad networks of the cosmopolitan and aristocratic Knights Hospitallers, who were powerful patrons of the arts. These works would in turn influence the development of art in Malta.

A gallery is dedicated to the identity of the Order and the fortified city of Valletta that they built to protect their religious, military, and ceremonial operations. This port city was instrumental in the success of the Order’s military and commercial endeavors.

The influence of European traditions in the visual and decorative arts is expressed in the reconstruction of the interiors of Maltese noble houses. Adorned with arrays of paintings, exquisite Maltese furniture, silverware, and tableware, the affluence of the higher classes of both the nobility and the members of the Order is clearly portrayed.

The legacy of the Baroque tradition is still very strong in Malta, and the ‘Europe’ narrative is a snapshot of what can be found in the majority of churches, palaces, and old residences on the rest of the island.

A Small but Mighty Part of the British Empire

In the 1800s, Malta became part of the British Empire with colonies all over the world, and with a mindset that anticipated globalization by two centuries. Hence, Malta’s role within such a world system as that of the British Empire found itself caught between its Mediterranean identity and its then-novel significance within a political construct that was broadly expanded.

Progress was acknowledged as an imperial interest, and education in the arts, including their practical application, was actively promoted in varied forms. British Malta’s European connections and its geographical significance in the Mediterranean were rethought through safer, cheaper, and faster means of travel. In consequence, the island’s history and inhabitants became increasingly known. How? Through the many views of the towns, villages, shores, and harbors of the Island Fortress of Malta.

The islands were consistently pictured by travellers and for travellers. Valletta, the Grand Harbour and the bustling commercial and military activity within its creeks and along its quays proved to be of much inspiration. Malta’s past heritage, natural and man-made, its inhabitants and their way of life and, inevitably, its ancient intimate connection with the sea were also among the favourite subjects that continued to be sought even later.

Art played a significant role in not only in determining stylistic development but also in showcasing the artistic resources and talents that Colonial Malta had to offer. Art education was also actively pursued and exposed Maltese artists and their work to the latest styles and trends mostly originating from mainland Italy. Being part of the British Empire provided Maltese arts and crafts with an international platform they had never had before.

The British worldview to which Malta now belonged perceived the Orient in a different manner. What was once viewed as the Holy Land and the Ottoman Empire now included vaster territories in the Far East. Attracted to the exotic Far East, artists no longer shied away from depicting these alien-to-their-eyes people and their habitats.

The British Empire highlighted Malta’s strengths as a Mediterranean island-fortress but distinguished its culture from its military historic legacy. Malta became potentially connected to lands and territories all over the world, some of which were previously recognized as enemy territory. In reality, it remained inward-looking: a staunchly Catholic Mediterranean British colony with an indigenous population consciously defining itself as a European nation.

These ideas and these concepts are narrated by the works of art on display at MUŻA’s ‘Empire Galleries’.

Achievements and Struggles of the Artist

Upon entering the museum, the visitor encounters ‘The Artist’ storyline. It represents the achievements, struggles, and choices of Maltese and foreign artists from the late 19th century up to today.

Numerous portraits are displayed at the entry, mimicking a crowd, such as the crowd just left behind in the busy streets of Valletta.

A number of works by Italian 19th-century artists show us the art scene that the Maltese artist encountered when he went to study in Rome. These works are displayed in comparison to works by local artists of the period to show the influence of the Italian aesthetic. This culminates in the gallery dedicated to the Maltese sculptor Antonio Sciortino, who established himself successfully in Rome.

The struggle of the Maltese modern artist for self-expression is represented by the contrasting works of the same artists in both traditional and experimental styles. The artist is divided between doing commercial work to earn a living and conducting innovative private experiments to feed his or her artistic curiosity.

The Maltese artist in modern and contemporary times reached abstraction through the initial push provided by the arrival of the British artist, Victor Pasmore, in Malta, to whom a gallery is dedicated. Works exploring abstract concepts by local artists complete the experience of ‘The Artist’ narrative.

This narrative presents a focus on the layered connections of Malta’s Mediterranean identity, its European connections, and the context of the British Empire within which Malta’s modern art was born. These links provide a connection with the three other narratives of the museum.