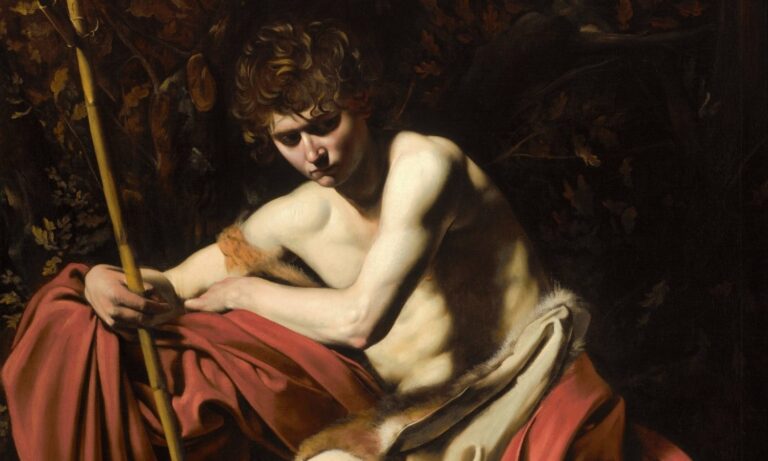 It’s Sunday and it’s time for some classics. This masterpiece is one of only a few original works by Caravaggio in American collections. Now it belongs to The Nelson-Atkins Museum of Art.

Although he never took in pupils, Caravaggio’s enormous influence on other artists played a vital role in the development of the Italian Baroque. In this Saint John the Baptist, Caravaggio has traded idealism for what oftentimes became in his own time a controversial realism.

He has literally stripped the Baptist of nearly all traditional attributes (halo, lamb, and banderole inscribed Ecce Agnus Dei or Behold the Lamb of God), leaving the brooding intensity of his emotional state as the subject of the painting. Saint John’s solemn pensiveness is reinforced by a Caravaggio trademark: the dramatic contrast of deep, opaque shadows, playing across the body and shrouding the sockets of the eyes, with a bright light that illuminates the Baptist from above and to his right. This stark contrast of light and darkness, the brilliant scarlet of the saint’s cloak and Caravaggio’s placement of him in the foreground close to our own space, all contribute to the dramatic impact of the painting.

Caravaggio most likely borrowed the Baptist’s pose from one of Michelangelo’s seated prophets and sibyls on the ceiling of the Sistine Chapel in the Vatican, Rome.

Want more about Caravaggio? Read our article about his mysterious death: “How Did Caravaggio Die? The Answer Is Not Easy“.