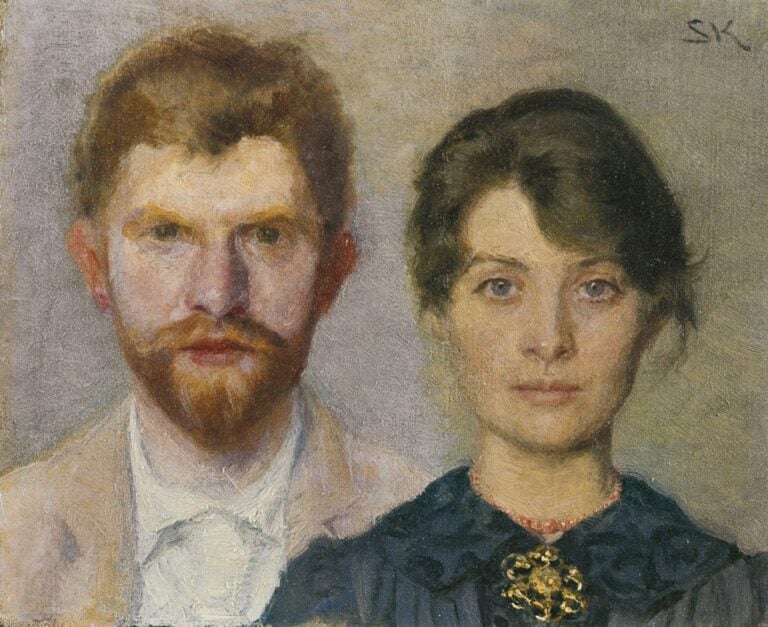 Marie and Peder Severin Krøyer were a 19th and early 20th century couple, and, while their marriage and lives were far from ideal, history has judged them both to have been truly notable painters.

When Peder Severin Krøyer met the young Marie, he was already an established member of the Skagen Painters group, living and working in Skagen, Denmark. While his wife was never widely known as a painter during her lifetime, long after her death – even long after the death of her daughter – she became recognized as one of the best Danish painters of her time.

Peder Krøyer was quite a bit older than Marie Krøyer (née Triepcke), yet they madly fell in love with each other and married in 1889. The painter was enchanted by his wife’s beauty, which is reflected in his many magical portraits of her.

The marriage didn’t last very long, however, due to difficulties with Peder’s mental state, and Marie was involved in an affair with another man before it even ended. They divorced in 1905, and Peder died at the age of 58 only four years later.

Though Marie was a very talented painter in her own right, she lived her life as a painter in the shadow of her husband, who was the informal leader of the Skagen Painters. She also struggled with depression after the birth of their daughter and suffered from a lack of self-confidence, all of which led to her to have a negative view on revealing her talent. Nevertheless, she did enjoy success in designing furniture, and for a while was a successful architect. After the divorce, she re-married, but that relationship also ended in divorce.

Many of the Krøyers’ artworks are in the permanent collection of the Skagens Museum, and we encourage you to see them there!

In 2012, the movie director Bille August directed a film about the Krøyers and their twisted marriage called simply Marie Krøyer. Here’s the official trailer: