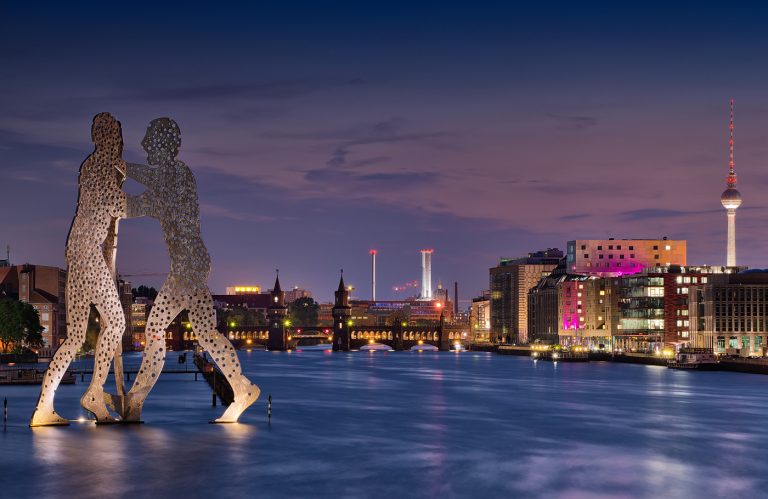 Jonathan Borofsky’s monumental aluminum sculpture, Molecule Man, towers over the Berlin skyline at 30 meters (100 feet). Standing in a region once divided by the Berlin Wall, the work embodies themes of unity, connection, and modernity.

The German insurance company, Allianz, commissioned the sculpture which was to be located near their offices. Installed in 1999, the site was carefully and deliberately chosen. Molecule Man was strategically placed in the middle of the river Spree at the intersection of three districts: Treptow, Kreuzberg, and Friedrichshain. The Spree once marked the division between East and West Berlin.

Jonathan Borofsky is an American artist. Much of his public work involves the depiction of the human form. Molecule Man consists of three men with arms melding into one another. This is a vivid image of merging, the figures almost embracing. The men are fully engaged in their motion, their bodies depicted in flat 2D profile. The monumental figures are covered in holes to depict what Borofsky saw as:

Molecules of human beings coming together to create an existence.

Despite the immense size of the sculpture, there is a lightness and uplifting quality provided by these numerous holes scattered through the bodies. The men appear to walk easily on top of the water. The artist plays with the concept that our solid physical bodies are composed of molecules. All these minuscule pieces create our existence.

There are two other Molecule Man sculptures in the United States: one in California and another in Iowa. All three cities sought public art that exhibits the modern concepts of globalization, unifying cultures, and bringing people together while exposing the fragility and similarities we share as well.

Borofsky sees that in a “world governed by probability”, Molecule Man gives the sense of “finding wholeness and unity within the world”. Berlin was once separated by a wall in this area. This sculpture is a poignant example of the desire to amend the disunion and segregation of the past.