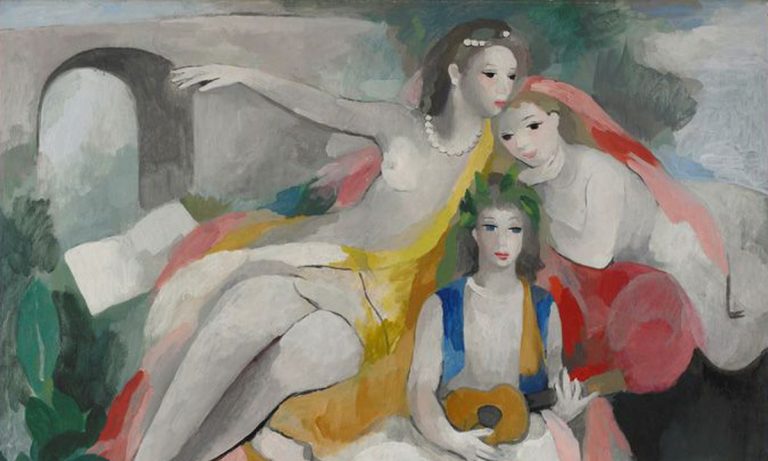 Most art fans know the names of the male avant-garde artists in the early 1900s, but fewer people know of the women who mastered the craft. Marie Laurencin was one of those women. She created dreamy, surreal paintings that opened the door to a new realm of feminine desire. With her brushstrokes and color choices, she challenged the male gaze. Now is the time to take a closer look at her life and work. Here is what you need to know, and the paintings you need to see!

Marie Laurencin was born in Paris in 1883. She was the illegitimate child of the French politician Alfred Toulet and the headstrong, independent Pauline Laurencin. Marie was raised by her mother, with little awareness of her father’s identity until the age of 21. It is no surprise that her childhood, with the infrequent and unwelcome visits of her father, influenced her work as a feminist artist.

At the age of 18, Laurencin studied porcelain painting at Sèvres, a commune in the southwestern suburbs of Paris that was famous for its porcelain production. She continued, and eventually finished, her formal art education at the Académie Humbert. There, she learned the art of oil painting, a skill that opened doors for her in an artistic “boy’s club” of the time. Laurencin began socializing in avant-garde art circles, which brought her close to Cubist painters such as Pablo Picasso, Jean Metzinger, and Robert Delaunay.

Around the same time that Laurencin was finishing her formal education, she also began to invest in solidifying her own world view. She began to attend the feminist gatherings of Natalie Clifford Barney, an American writer who had expatriated to France at the turn of the century. At these gatherings, lesbian and bisexual women had conversations about creativity, and how it was linked to female desire. In order to facilitate the free flow of thought at these gatherings, Barney visualized them as taking place in an alternate realm, a feminist utopia inspired by the Greek poet Sappho’s island of Lesbos.

Perhaps it was these gatherings that inspired some of Laurencin’s group paintings of young women in social situations, such as Les jeunes filles (Jeune Femmes, Young Girls), pictured below.

When returning to her Cubist social circles, Laurencin’s view of the world, as a queer and feminine artist, often clashed with Picasso’s masculine, heterosexual perspective. Despite their differences, their professional relationship proved beneficial to Laurencin when Picasso introduced her to one of her first romantic partners. She maintained a passionate relationship with the poet Guillaume Apollinaire until 1912, and he often wrote about her as his muse. It wasn’t an easy break up, and Apollinaire refused to accept reality until Laurencin married painter Baron Otto von Waëtjen two years later.

Despite her formal relationships with male artists, Laurencin maintained several romantic and sexual relationships with women throughout her life. Her queer perspective can be seen in all of her art. In her early years, she painted soft, etherial images of women expressing sensuality in a multitude of ways. Later, her work became more erotically explicit, often showing women kissing and laying together. Her work was also tinged with melancholy, expressing a longing for women to be viewed, and respected, through a more feminist lens. Along with her painting, she wrote poetry, one of her more poignant passages states:

Worse than being dead
even more pathetic
is being a forgotten woman.

Laurencin’s paintings ensured that the queer women of Paris would not be forgotten. In one painting, she depicts a female gathering where women create. They make music with instruments, and sensuality through dance. Three women gaze unapologetically at the viewer, with the two dancers in an embrace. The slender hands of the dancers caress one another, inviting the viewer to partake in the subjects’ intimacy.

Some critics of Laurencin’s work have rejected it as anti-progressive, seeing her use of soft lines and pastel colors as a reinforcement of a patriarchal view of femininity. She was often open in her limited views of gender, emphasizing the differences between men and women while expressing a clear preference for the latter. Although the understanding of gender identity in the early 1900s was a narrow, binary view, critics believe that Laurencin could have done less to accentuate established stereotypes.

Upon further reflection, however, Laurencin represented a spectrum of gender, romance, and sexuality that were very real to her. She was a queer artist. This was her lens, and she was relentless in her representation of this identity. The male Cubists of this period championed bold colors and jagged corners, imposing an undeniable sense of masculinity upon the viewer. Laurencin stayed true to her perspective, favoring organic forms, and subtle movement in her paintings. The eye contact, which her subjects make with the viewer, challenge the male gaze and imply a deeper way of female knowing.

In the painting Deux Femmes, two women appear to be exchanging an intimate moment. One stares sensually at her partner’s décolletage, while the other challenges the viewer with a penetrating look. These women are anything but submissively feminine. Laurencin’s female subjects are dangerous creatures, aware of their power, disguised in soft brushstrokes and pastel palettes.

Within the current context of our ever-expanding knowledge of gender and sexuality, it is time for women like Marie Laurencin to be seen. There are spectrums of attraction, both romantic and sexual. Identifying as a woman means different things to different people, and we should not write off those who embrace femininity. Instead, let us embrace everyone, making space for all identities and preferences. A pioneer of her time, Marie Laurencin’s work did exactly that.

Hannah Ralston is a librarian by day, a writer by night, and an admirer of art all the time. She studied photography as an undergraduate and was lucky enough to be raised by artist parents. When she isn’t reading, writing, or art gawking, she enjoys spending time outdoors in a kayak.