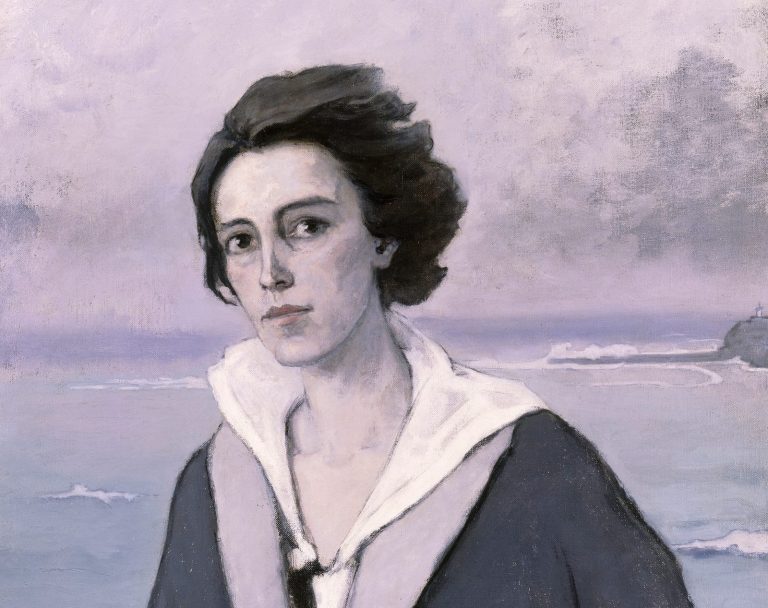 Being a bisexual woman at the beginning of the 20th century was difficult. They were looked down on, they were scorned and discussed behind their backs. But they kept on going, working, and loving. Here comes a story of a difficult and troubled love between two artists: Romaine Brooks, a painter, and Ida Rubinstein, a dancer.

Rubinstein was born into one of the richest families in Russia, who was trading with sugar and dealing with banking, which means she had a financially secured future. She was orphaned at an early age but her relatives from St Petersburg ensured she received a solid education and maximum exposure to the cultural activities of the city. Already as a child, she exhibited a flair for the theatrical, always going by the name “Ida” instead of her given name Lydia.

As she began traveling and meeting socialites, her behavior changed and her contemporaries found her ideas too liberated and inappropriate for her status. Based on her modern dance technique that was considered scandalous, and her role in a 1908 private performance of Oscar Wilde’s Salomé, in which she stripped nude for the Dance of the Seven Veils, she was forcefully placed in a mental health institution.

However, Rubinstein escaped the psychiatric hospital and ran off to Paris, where she began working with the Ballets Russes, starring in their shows, Cléopatre in 1909, and Sheherazade in 1910. She fueled the company with her immeasurable beauty and grace, inspiring many artists and attracting large audiences to the shows. Nevertheless, Rubinstein needed more freedom and in 1911 she left and founded her own company instead.

Yet the company had to wait, as World War I broke out and Rubinstein, like many other artists, decided to volunteer for the war effort. In her specially tailored nurse’s uniform (designed by her life-long friend Leon Bakst and described by Jean Cocteau “like the pungent perfume of some exotic essence – ethereal, otherworldly, divinely unattainable…”), she attended to wounded soldiers and traveled across France reciting poetry from Count de Montesquiou’s Offrandes blessées. In the painting below Romaine Brooks depicts Rubinstein as a heroic nurse; in the background, we see the city of Ypres burning.

After the war, Rubinstein returned to her company which was officially established in 1928 and financed with her part of a family inheritance. It presented ballets by some of the greatest artists of the time: choreographies by Nijinska, Massine, Fokine, and Jooss; original scores by Ravel (Boléro), Stravinsky (L’Oiseau de Feu), Sauguet, Honegger… The company disbanded in 1935. Her last performance was as an actress in 1939, in Jeanne d’Arc au Bucher.

An American painter, Romaine Brooks met Rubinstein in 1911 after her first performance as the title character in Gabriele D’Annunzio’s play The Martyrdom of St. Sebastian (for which Rubinstein was excommunicated by the Parisian archbishop because she starred as St Sebastian, a Catholic saint, while she was a Jewish woman).

D’Annunzio had an obsessive but unrequited attraction to Rubinstein, whereas Rubinstein fell deeply in love with Brooks, a romantic triangle unfolded. Rubinstein was so committed to Brooks that she wanted to buy a farm in the country where they could live together undisturbed, yet Brooks was not interested in hiding at all.

Rubinstein was Brooks’ favorite model, her “fragile and androgynous beauty” was ideal for her paintings. She made a series of allegorical nudes that were extremely controversial at the time, especially because they were produced by a female artist. In The Crossing, for example, (also exhibited as The Dead Woman), Rubinstein is stretched out on a white bed or bier against a black void variously interpreted as death or resting in spent sexual satisfaction on Brooks’ symbolic wing…

The couple split around 1914. Was it because of another woman? Some say that Brooks had already met her future lover – Natalie Clifford Barney, an American-born writer – in 1914, others say in 1916. Anyway, the relationship with Barney was the longest and most important for Brooks. It was, however, yet another triangle, as they shared their lives with Lily de Gramont. Nonetheless, Brooks couldn’t forget Rubinstein, and she painted her one last time in The Weeping Venus (1916-1917). She said she tried to repaint Venus’ facial features many times, but Rubinstein’s face kept haunting her: “It fixes itself in the mind.”