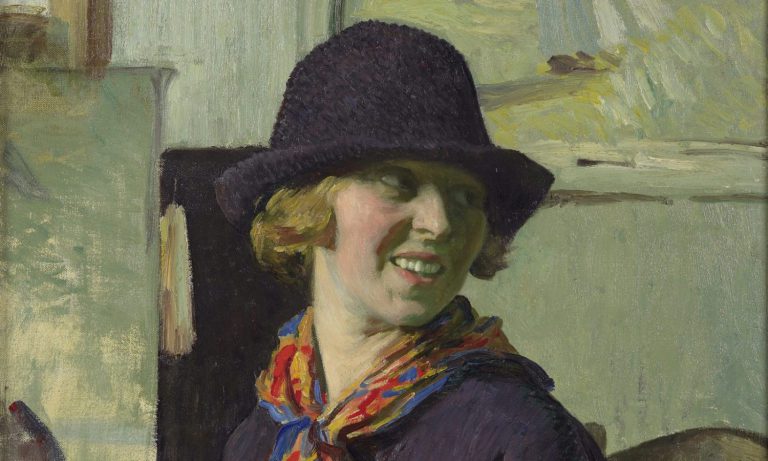 An immense biography of British painter Dame Laura Knight has been updated and re-published in paperback this year by McNidder and Grace. Here we take a look at the book Laura Knight: A Life by Barbara C. Morden and consider the works of Laura Knight.

“I am just a hard-working woman, who longs to pierce the mystery of form and color, and with full heart add a mite to the treasure of the world.”

Laura Knight (née Johnson) was born in 1877 to a poor family in Nottingham, England. After a long and fruitful career, she was the first female artist to be made a Dame of the British Empire in 1929.

She was one of Britain’s most influential 20th-century Impressionist painters, but she was also known for her charcoal sketches. She was immensely popular in her time, but her bold use of color and her desire for ‘realistic’ paintings sadly went out of fashion. She had a wonderful ability to create incredible depth and accuracy, even when painting fast, out in the community. But her attention to detail and cheerful, almost photographic representations fell out of favor. However, she continued to paint and exhibit and died at the ripe old age of 92 in 1970.

She started painting at just 13 years old when she enrolled herself in the Nottingham School of Art. She also studied in France. She only left her studies when her mother died, and she was forced to start earning money for the family. In fact, she took on her mother’s private art pupils, but she really didn’t enjoy teaching.

She Lived in Artists’ Colonies

Laura married the painter Harold Knight when she was 23, and together they joined artists’ colonies in Staithes, in Yorkshire, and in Holland. They then joined the famous Newlyn School in Cornwall, rubbing shoulders and sharing ideas with artists such as Walter Langley, Stanhope Forbes, and Alfred Munnings. Laura threw herself into the wild social circle, but Harold was more reserved.

She loved painting people on the edges of society, such as circus folk and gypsies. She immersed herself in their lives and painted them from observation. In the 1930s, she traveled for several months with a touring circus.

She also spent several years drawing and painting Gypsies at Epsom races. People she had met there invited her to visit a Gypsy settlement in Iver, Buckinghamshire. Over a period of months, she visited every day and painted a number of portraits of one particular family.

She Joined the War Effort

She understood hard work and respected it in others. She deftly captured the heroism of the Women’s Auxiliary Air Force officers, as well as showing the more workaday life of war-time lathe operators and munitions workers.

She assisted with the war effort, producing propaganda posters for the War Artists Advisory Committee. A selection of portraits included depictions of female figures hard at work with machinery, intended to attract further female recruits.

She was also the only female war artist at the Nuremberg trials after World War II. This was the one time in her life when she departed from realism in her work. She shows the Court, the press box, and the accused. But at the top of the painting, hanging heavy over the scene, we see the devastation of a war-torn landscape.

She Painted Dancers and Actors

Back in the UK, she loved to get ‘behind the scenes’ and under the skin of a life. She painted and sketched many scenes of actresses and ballet dancers. She also had an interest in costume design. She captured performers in repose backstage as well as in motion, dancing.

R. John Croft is the great-nephew of Dame Laura Knight, and Charlotte Bedford is her great-niece. They heard many of the tales recounted in this biography directly from Laura Knight, and they have generously shared them with writer Barbara C. Morden. The family photographs are charming and evocative. But, in addition to recording the family tales, Morden has done exhaustive research into the history and the legacy of Dame Laura Knight. This is a book chock-full of facts, correspondence, events, parties, love affairs – and of course, great art. If you are a fan of 20th-century British art, then this is a must-read.

For more on life and art of Laura Knight check out the official family website.