The Magic and Splendor of Karagöz – Turkish Shadow Puppets 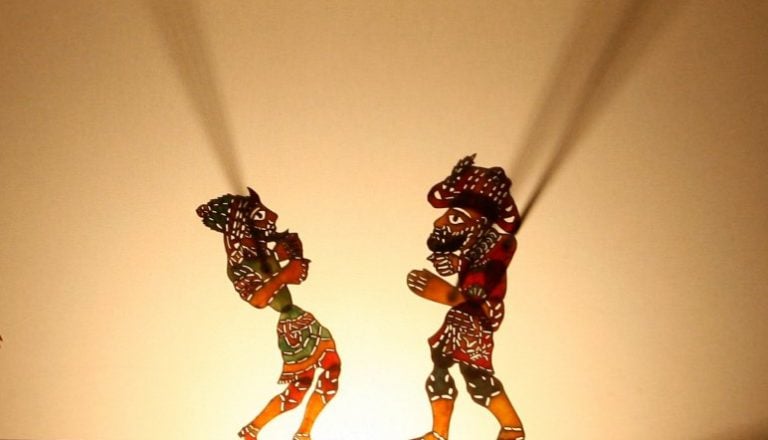 Evoking the imagination of adults and children for centuries, Karagöz (“black eye” in Turkish) is a popular and beloved Turkish shadow puppet character as well as the name of the shadow puppet theater in Turkish culture. The art of Karagöz – Turkish shadow puppets, is beyond magical; it not only brings life to flat, two-dimensional hand-drawn images using light, color, and shadow, but it awakens the dreamer in all of us. Karagöz weaves together poetry, music, song, and dance blending ordinary tales with mysticism and humor. The artists behind these unique and whimsical creations dare us to dream beyond the curtain.

The Origins of Turkish Shadow Puppets

There is little speculation that shadow puppets originated in the far East, but exactly how shadow puppets arrived in Turkey is quite controversial. Some scholars believe that when Turkic people migrated from Central Asia to Turkey, they brought the fantastic shadow puppet show with them.

Others are convinced that it was during the 15th century when Sultan Selim, after watching a shadow puppet performance in Egypt, brought a shadow puppet master back with him to Turkey to perform at the palace thus introducing the art form to Turkish culture. Traveler and writer, Evliya Celebi recorded that shadow puppet theater was performed in the Ottoman Palace during the reign of Bayezid I from 1389-1402.

Whatever the true journey of shadow puppets to Turkey may be, Karagöz has been embraced since its arrival. Puppet shows were performed in palaces, private residences, coffeehouses, parks and gardens throughout Istanbul and around Turkey. Karagöz was usually performed during feasts, festivals, circumcisions, special celebrations, and Ramadan. In the last century, Karagöz has been performed in public theaters, cultural centers and schools across Turkey.

The Karagöz plays revolve around two main characters: Karagöz (lead) and Hacivat. As the legend goes, these characters were based on two real people who worked on the construction of the Ulu Camii (Ulu mosque) in 1396 in Bursa, Turkey. Karagöz was a worker and Hacivat was the foreman.

The two were always joking around and distracting the other workers which slowed down and delayed the progress of the mosque. When the Sultan heard the news, he ordered that the two men be executed. As a way to preserve the memory of these two comics, a local puppet master immortalized these men in a shadow puppet play that the Sultan enjoyed so much that he later regretted his decision. Whether this story is true or not, is for you to decide.

Karagöz represents a common, ordinary man. He is uneducated, reliable, usually unemployed, and always coming up with a scheme to earn money that usually doesn’t work. He is rude and crass. Karagöz has a round face with a large, black eye and he wears a red hat to hide his bald head. One arm is longer than the other. He typically wears a red, decorative jacket with blue knickers. Hacivat depicts an upper-class, educated man who is poetic, articulate, and clever. He wears a green hat and green decorative clothing. He recites a ghazel, a special poem, at the start of the play.

The plays and dialogues highlight their antics, friendships, pranks, and fights. Originally, they were not intended for young audiences and contained dark, comical, often sexual and scandalous dialogue and crude jokes. The plays were later adapted for children and usually involved the audience by asking questions or inviting them to sing along. During the holy month of Ramadan, children delighted in watching a Karagöz play as this was a major form of entertainment.

There are many other Karagöz characters that appear over time and all portray different ethnicities: Greeks, Armenians, Jews, Albanians, Persians, Bosnians and Arabs. These characters reflected the diversity of Ottoman society in Istanbul from natives to immigrants, rich and poor, priests and imams, without prejudice. There were also some characters who came from various regions in Turkey.

In Karagöz, everyone was accepted despite their race or religious beliefs. Some of the most popular Turkish shadow puppet characters that made regular appearances were: Zenne (lady), Tiryaki (opium addict), Beberuhi (dwarf), Laz (boatman), Tuzsuz Deli Bekir (drunkard), Çelebi (Istanbul gentleman) and Çengi (dancer). Supernatural characters also joined the show to enhance the imagination: witches (cadılar), djinns and monsters together with animals and inanimate objects like trees, vases with flowers, fountains and hammams.

How Karagöz Are Made

Special tools are required to create Karagöz. The puppets are made by hand, not a machine. Originally, they were made from camel or water buffalo hide, sometimes cow or donkey depending on what was available at the time. The hides were cleaned, scraped and soaked. Using a sharp object often a piece of broken glass to remove access hairs. After the hides had dried under the sun, they were smoothed and worked until the skin becomes translucent.

A puppet pattern was drawn separately, then traced onto the hide. Using a special knife, a nevregan, to cut out the image. Then, it was painted with natural pigments made from plant roots and Indian ink. Each artist had their own secret color recipe. The pieces were then embroidered and tied together with a sturdy thread made from animal gut.

A hole was made in the upper body, usually the neck, to insert a control rod. Some puppets also had moveable body parts to help them dance as was the case with Karagöz and Çengi. Although each artist had their unique touch, they tended to stay true to the depiction of the original figures.

A Karagöz puppet master is truly a hayalı, an image creator, and one who embodies the true essence of a multidisciplinary artist. Historically, karagözcü made their own puppets, wrote, acted in and directed their own plays plus created the music for the show.

Highly skilled and multi-talented, the karagözcü memorized every play by heart, gave voices to all of the characters that changed according to character while simultaneously animating the puppets and listened to the reactions from the audience to make sure they stayed entertained.

They are masters of juxtaposing reality with the imaginary to create an entertaining experience that is appreciated by all audiences of all ages. Unfortunately, very little is known about karagözcü, and their art techniques. Despite all of their amazing talents and creativity, like many artists, then and now, most karagözcü had to work day jobs to sustain their livelihood.

Even in our modern times, Karagöz is still loved by many Turkish people and people all over the world who appreciate this traditional Turkish art form. Several museums throughout the world house Karagöz collections including the Topakapı Palace in Istanbul, the Harvard Museum, and the British Museum among many other cultural institutions.

Preservation of this traditional Turkish art form is crucial to keep Karagöz alive for future generations to enjoy. Turkey confirmed its membership with UNIMA, The International Puppet and Shadow Play Union, in 1990 to keep the tradition of Karagöz active and support efforts to perform this traditional art form in public spaces and schools around Turkey.

Ünver Oral, Turkish author, Karagöz expert and one of the founders of UNIMA Turkey has been promoting traditional Turkish theater for several years and wrote several books on the subject. One of his books, Turkish Shadow Play Karagöz, gives a comprehensive history of Karagöz in Turkey and abroad from past to present.

In 2007, the Karagöz Museum was established in Bursa, Turkey, to preserve and promote the history of Karagöz. The museum collection has 61 authentic Karagöz shadow puppets, along with artifacts and ephemera. There is also a library and shadow puppet theater for performances.  In 2009, UNESCO added Karagöz added to their list of the intangible cultural heritage of humanity, officially recognized as an important and valuable contribution to Turkey’s cultural heritage.

With today’s modern technologies, digital forms of entertainment like computers and video games, keeping Karagöz alive will definitely be a challenge, but with vigilance and determination, the art of Karagöz will live on. Karagöz holds a special place in the heart of many with its uncanny humor and invaluable magic that makes everyone laugh, encouraging audiences to tap into their imaginations. A Turkish cultural treasure, Karagöz inspires us to dream with eyes open and hearts ablaze.