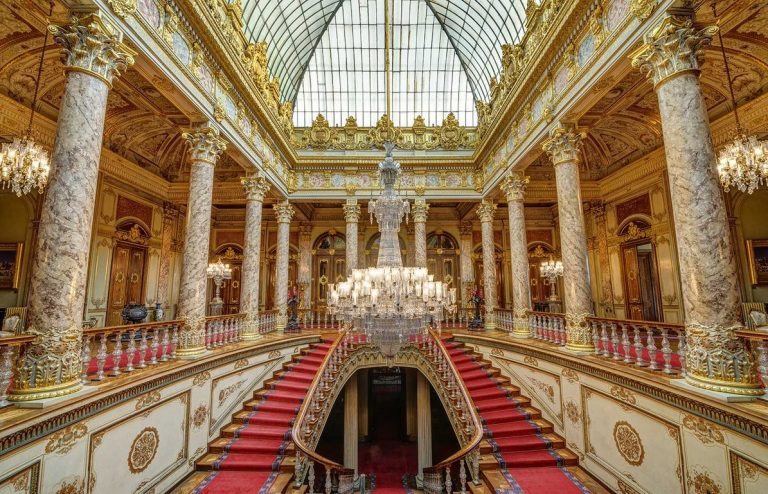 Representing splendor, opulence, and brilliance, Rococo art prevailed in Europe from the year 1700. It followed the Baroque period in art, which included less light and more religious depictions. When it comes to architecture, however, Baroque and Rococo styles are closely intertwined. The way the Rococo style of architecture arrived in Turkey was a bit different than in other European countries. To understand the Turkish-Ottoman interpretation of this style, let’s look at its history and characteristics.

The Rococo style emerged as a representation of the new age of Enlightenment. The preceding Baroque style employed contrasts of light and texture, while aiming to consolidate the Catholic identity. Conversely, Rococo contained more light sources, softer colors, and its source was more secular. Flower, pebble, and seashell motifs characterized Rococo art. Although Rococo came after Baroque in Western Europe, its emergence in Turkey (then the Ottoman Empire) was the other way around.

Emerging during the reign of the French King Louis XV, Rococo art was embraced in France from the beginning of 18th century. It is believed that it was introduced to the Ottoman Empire in the first quarter of the 18th century. This introduction happened when, King Louis XV sent the Ottoman Sultan, Ahmet III, a few presents (probably paintings and small sculptures) in the Rococo style. Very impressed by its grandeur, the sultan then sent an ambassador to Paris. The ambassador observed and learned about this French style and returned with several paintings representing the style of Rococo.

The interaction between the rulers and ambassadors of France and the Ottoman Empire continued. The Ottomans then studied the Baroque and later applied it mainly to their architecture. Numerous buildings were designed in an architectural style that is known as the Ottoman Baroque today. Therefore Baroque was introduced to Ottoman Empire later than Rococo and the two styles were often intertwined. In the Ottoman Empire, it was common to see a building with a heavy Baroque exterior and a light, pastel interior with flower and seashell motifs.

Rococo and Baroque architecture were prevalent in the Ottoman Empire until the second half of the 19th century. Notable architects of this style included Mehmet Tahir Ağa, Mustafa Ağa, Nigoğos Balyan, Garabet Amira Balyan, and Simon Kalfa.