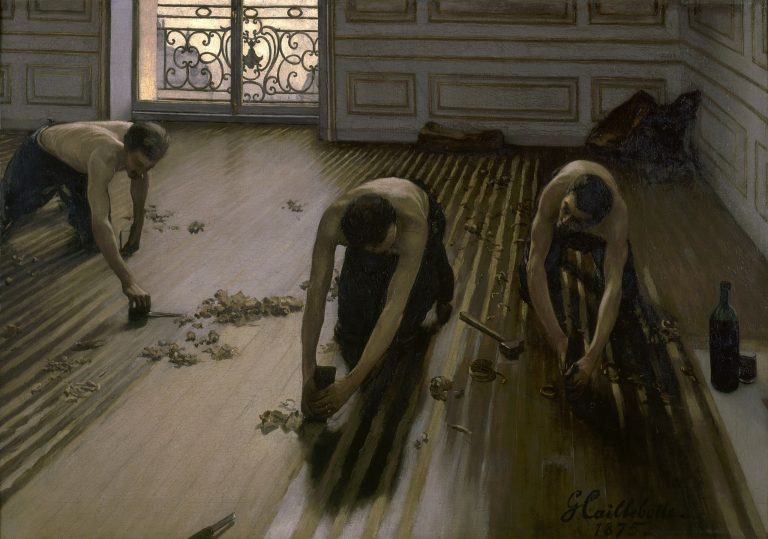 Don’t Give Up the Day Job. Earn as an Artist

I think the following motto perfectly fits today as we celebrate all the workers of the world (students count too!). On this occasion I would like to pay tribute to all the jobs which no longer exist and to the workers whose professions are rare, old-fashioned, or obsolete. The paintings we present today prove Rilke right – the work of these people will live on forever in their art so in a sense they never died.

To work is to live without dying.

In Edgar Degas’ time, one could find a millinery shop at almost every corner. Typically run by women for women, these shops produced or sold imported garments and accessories, mostly hats. Today days millinery is a rather uncommon profession and it is used to describe a designer, a maker, or a salesman of hats, primarily for a female clientele. Curiously, the origin of the word “milliner” is related to Milan, a city known for trade in clothing.

Being a gleaner was a synonym for being poor. Gleaners collected leftover crops from farmers’ fields after the commercial harvest or from fields where it was not economically profitable to harvest. It was first described in the Bible and later became a legally enforced entitlement of the poor in a number of European countries, including England and France.

Gustave Caillebotte made two paintings treating the theme of parquet planers. The first one is extremely famous and you can find it in Paris in Musée d’Orsay, or on our cover image. I wanted to show you this one as well, which he produced a year later and in my opinion is much calmer. It also focuses more on the act of scraping the floor, rather than any homoerotic covert messages. (The 1875 painting was very controversial for its  “vulgar subject matter”, as described by a critic.) Scraping floors is a means of finishing them very gently. In the past it was commonly practiced but nowadays people use special heavy-duty machines to scrape of the worn off surface layer of old wooden parquets.

As you can see, many women worked as laundresses. It was very hard physical work, we are so blessed to have washing machines these days! Imagine washing every single item of clothing by hand in a cold river. And then one had to press it all with a heavy iron and fold it. Laundresses were such a common sight that many Impressionist painters working en plain air portrayed them, including Degas, Renoir, and Pissarro.

Gustave Courbet was not the only one who painted stone breakers. Georges Seurat was also interested in the lower classes of the society and he painted them both at work and at leisure. Stone breaking should rather be called “back-breaking” as it is an exhausting job. Thankfully today we have machines for that, although there are still people who do it exactly the same way as in the past.

Happy International Workers’ Day to you all!