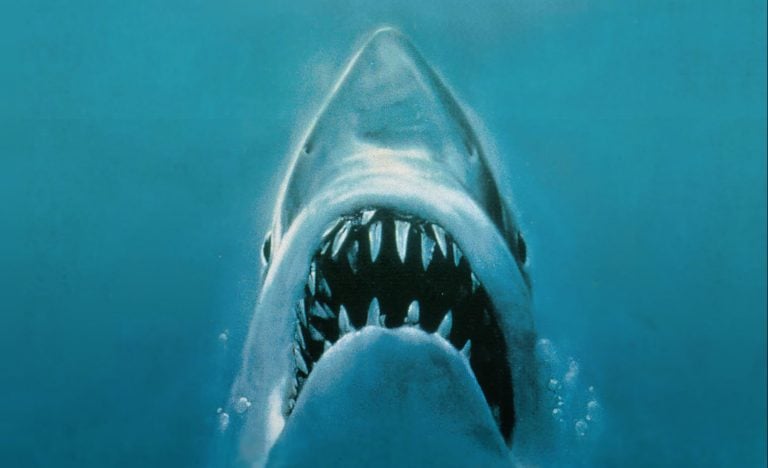 In 1976 the iconic original painting for the Jaws book cover and movie poster went missing. Was it lost, stolen, or carelessly thrown away? If this doesn’t strike you as compelling a mystery as the Isabella Gardner Museum theft or when The Scream was stolen from the Munch Museum, please check your art snobbery at the door.

After all, if we are to be brutally honest, the image of the oversized shark about to devour the naked woman swimming, unaware of her fate at the surface of the water, is probably just as recognizable across the globe as the Mona Lisa and took as much artistic talent and technique to create as anything Andy Warhol or Banksy ever dreamed up. If you think I am taking this a little too personally, you are right. After all, the artist, Roger Kastel, is my father.

If you don’t know Roger Kastel by name, you have certainly seen his artwork. Outside of his classic painting for the Jaws paperback book cover and movie poster, he is also well known for doing the movie poster for The Empire Strikes Back. Additionally, he has done book covers for countless bestsellers, including a series of celebrated Jackie Collins books and the paperback cover of Zen and the Art of Motorcycle Maintenance. Even today, well over 70 years since his journey as an artist began, he can still be found in his studio painting.

The last time my father saw his Jaws illustration was in 1976 when it was featured with over 900 classic paintings at the New York Historical Society for the exhibit 200 Years of American Illustration. The exhibition was such a hit at the time that it drew the largest crowd ever for an exhibit at that museum.

After that, it ended up in Los Angeles, where my father received a call from a Universal Studios Art Director telling him it won a gold medal at a prestigious art show. Neither the gold medal nor painting ever made its way back to the rightful and legal owner, its artist, Roger Kastel. From there… Crickets.

The only serious attempt to find the Jaws missing painting, of which I am aware, occurred several years later. The head of Batham Books, Oscar Dystel, for whom my father did the original painting, called him out of the blue saying he would be meeting with several Universal executives, including Stephen Spielberg, and would press them about the whereabouts of his painting. A few weeks later he called back, empty-handed, telling my father that Universal denied any knowledge of the whereabouts of the artwork.

If you are a follower of the art world and/or pop culture, and you are surprised this is the first time hearing of this, don’t be. Even though illustrators are entitled to get their original work back, many publishers or other receivers of illustrations in that era, never bothered. Think of it as old school art world snobbery… It’s only an illustration, not real art, so it doesn’t matter.

But the question remains. What happened to my father’s work?

Where is one to start on a mystery over 45 years old with no clues? Outside of putting my father’s Jaws illustration on the back of milk cartons under the caption MISSING, I have no clue.

Was the painting simply lost, misplaced, or thrown away like an old movie prop by Universal out of lack of care or ignorance? Or was it stolen somewhere in Universal’s care by an admirer and/or enterprising thief?

My recourse is limited. By writing this article, I am taking a longshot approach that someone out there reading this may know about its whereabouts or fate and step forward.

Then, of course, there is Universal Studios. We hear a lot of blather these days from large organizations on their social and corporate responsibility, including from Universal, which today is Universal/NBC. Instead of acting globally, it would be helpful if Universal Studios could act locally and involve themselves in an act of social responsibility of their own making. How about if they do an internal investigation to see if they can uncover anything?

I’m sure their corporate lawyers would hate this idea, as rule number one in the legal world is never to admit liability in any way, shape, or form, but if they come up empty in their investigation, a simple apology to my father would be a nice gesture. At 91 years of age, he has lived a remarkably wonderful life and is a quality person. Never once has he ever expressed any bitterness for his Jaws painting not being returned nor let it impact his life in a negative way. But still, absent of a reunion with his missing Jaws painting, an apology would be the classy thing to do.

Matthew Kastel is an executive with over 25 years of experience in the world of professional sports, including major league teams, organizations, and some of the largest vendors in the industry. Matt has written for several publications and co-wrote a college textbook, Managing Sports Facilities.  He also teaches and lectures at universities on the business of sports. For more information, you can visit his website.