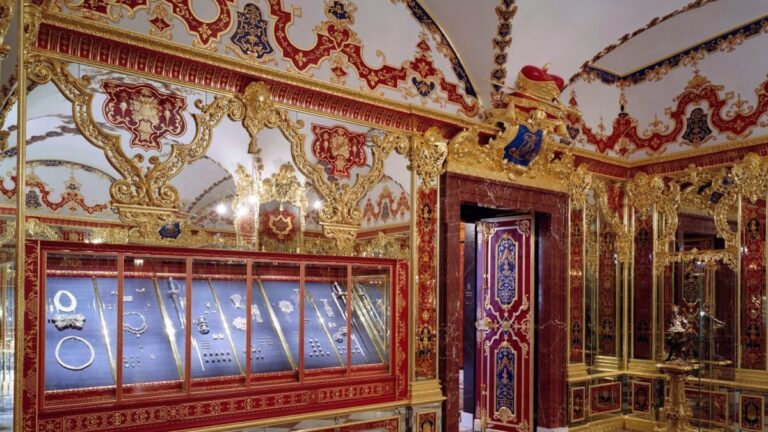 On Tuesday, November 25 2019, burglars broke into the Green Vault museum, at the Royal Palace Dresden, Germany, and stole priceless jewels! This is possibly one of the most serious art thefts since World War II because of the historical value of the 18th century jewelry in question. Here is the story of Dresden’s stolen jewels!

“This heinous thievery robs all humanity.”

The police believe that a nearby fire at an electrical junction box, early in the morning, was a decoy, which disabled the alarm system and put out streetlights. In under two minutes, they quickly smashed a window, broke into the display case, and fled with the priceless jewels. Fortunately, some jewels are safe, because they were either sewn into their display cases or are currently on loan to The Metropolitan Museum of Art in New York.

The fact that the Green Vault, and its collection, survived the bombing of Dresden in World War II, makes this theft even more shocking.

The museum has not given a figure for the value of the jewels, as they are genuinely priceless. Their historical importance and impact as part of a collection are irreplaceable.

The Green Vault is part of the Royal Palace, and it now belongs to the German state of Saxony. Named after its colored walls, the museum is a series of eight rooms. They progress in theme from amber to ivory to silver and, finally, to the Hall of Treasures; the scene of the crime. The suite of eight rooms, which are architecturally stunning, were designed to reflect the abundance of the collection. They house thousands of items and so we can be grateful that only a small fraction of the collection is missing.

“The Dresden Museums have taken on an exemplary process of expansion, renewal and re-presentation of the State collections in the last years with an impressive Public relations in public and in general, in the rest of Germany and abroad, as well as the international scholarly community, are all affected by this grotesque robbery and the Green Vaults are a treasure on the National Gallery of London.”

The 18th century collection was that of August the Strong, 1694-1733, a Saxon ruler who later became King of Poland. He made his personal collection public between 1723 and 1729; making the Green Rooms, possibly, the world’s oldest museum (the Vatican lay a claim to this title too). It’s certainly the largest treasure collection in Europe!

After the Holy Roman elector, Moritz of Saxony had ordered the wing to be added to Dresden Castle in 1547, it was used as a private depository throughout the 17th century. During his four-decade-long reign, August the Strong filled the vaults with a variety of pieces ranging in style from Baroque to Classicism.

“We are devastated by the Green Vault, which are so deeply in the hearts of the people of Dresden, and so important to the cultural history of the world. The Met, and the entire museum community, is hoping for the immediate and safe return of these most important pieces.”

The collection of jewels is akin to any other country’s Crown Jewels, except there are more of them!

Saxony police are offering a hefty reward for either the capture of the perpetrators or the recovery of the treasures. Sadly, if they are not found soon, it is likely that the jewels will be taken apart, possibly re-cut, and lost forever!

There is some hope, however, in 2018 the Swedish crown jewels were stolen but then found. The thieves left them in a bin because there was too much attention on the items!