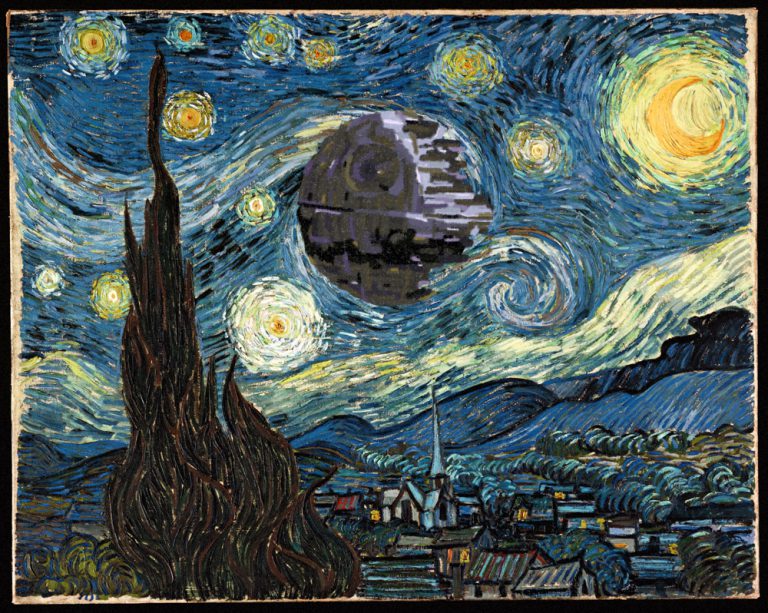 Today is Star Wars Day. The first documented use of the phrase “May the 4th be with you” came from Margaret Thatcher’s political party, to congratulate her on her victory in the 1979 election. The first official celebration of Star Wars Day happened at the Toronto Underground Cinema in 2001, where the idea quickly caught on among fans. For this day, we searched for archetypes in Star Wars and art!

A New Hope, the first Star Wars film, was released over 40 years ago. 9 films and several sequels, prequels, and spin-offs later, the cultural impact of the saga of Luke Skywalker is undeniable. One of the reasons these stories are so enduring is because director George Lucas was heavily influenced by the ideas of the monomyth in the creation of his universe, particularly by the work of Joseph Campbell.

Campbell was an American professor of literature whose work was in large part based on what he called the monomyth: the Hero’s Journey. The monomyth is a story template shared by many world cultures where a hero leaves home and, through a series of adventures and ordeals, returns enlightened and ready to help the community he once left. We approach the monomyth – which ultimately is a pattern for an individual’s journey of life – through archetypes or certain characters that embody different traits and represent our ways of understanding and engaging with the world.

Before Campbell, the psychiatrist Karl Jung had identified 12 models of behavior. And even before then, the ancients were understanding the world through archetypes that had been passed down to us in the form of myths. When we compare the archetypes in Star Wars with those that surface in so many cultures throughout the world, it is easier to see the appeal of this enduring story and why it has touched so many people since its release.

Archetypes in Star Wars and Art

Luke Skywalker is the main hero in the Star Wars universe. The hero is destined to defeat evil, may or may not have been born to nobility, has great courage, and is willing to risk it all for the greater good. His purpose is to restore peace, harmony, and justice to the community. Art is full of heroes, both religious and mythological. For example, here we see Perseus and Andromeda, by Anton Mengs, from The State Hermitage Museum.

Read the legend of Perseus here.

Luke faces different antagonists, but his ultimate adversary is the Emperor. The adversary is a shadow version of the hero, willing to do anything to stand in the way of the hero achieving the goal, and ready to thwart him or her at every turn. In Laocoön and His Sons, attributed to Agesander, Athenodoros, and Polydorus of Rhodes, the adversary is very easy to spot.

Read the story of Laocoön here.

Han Solo is a great example of an anti-hero. An anti-hero may or may not have all the qualities of the hero, but lacks the desire to achieve for the greater good. Samson is a classic anti-hero. Here we see him as depicted by Valentin de Boulogne, at the Metropolitan Museum in New York City.

Visit here for the story of Samson.

Princess Leia is the main female figure in the film, and she displays elements of these two archetypes at different times. She is in need of help at the beginning, but she is also strong-minded and capable, and proves a temptation, distracting Luke from his Jedi training, and luring Han into the rebellion.
Here we see Guinevere as Damsel in Distress/Temptress in The Last Hour, an illustration of Alfred Lord Tennyson’s Guinevere, by Florence Harrison.

The mentor’s role is to provide guidance to the protagonist up until a certain point, where the hero then has to figure things out on his or her own. The quintessential mentor in Star Wars is Obi-Wan Kenobi, who sets Luke on the path to becoming a Jedi, but is not there to see the end of Luke’s journey. Here we see the centaur Chiron Teaching Achilles, in a detail of a fresco from Herculaneum, now at the Museo Archeologico Nazionale in Naples, Italy.

The Friendly Beast is generally an animal who assists the hero, showing that nature is on his or her side. Here, we see the Ulysses Recognized by his Dog Argos, by Jean-Joseph Espercieux.

Visit here for more on Argos.

These are the sidekicks, ready to protect the hero and help him or her accomplish their mission. R2D2 and C3PO, the loyal droids, are good examples of this archetype. Here we see Achilles Lamenting the Death of Patroclus by Gavin Hamilton, where the hero Achilles shows his grief over the passing of his dear friend and helper.

Visit here for more on Achilles and Patroclus.

Threshold guardians are there to block the hero’s path and to test him  – has he developed the necessary skills to succeed in his or her mission? For example, Jabba the Hutt is a threshold guardian. So is Cerberus, here portrayed by William Blake.

The power of archetypes in the collective psyche cannot be overstated. Archetypes allow audiences to connect certain parts of themselves to characters in stories and art, thereby creating a stronger connection and facilitating understanding and learning on many different levels. The ancients knew it, the artists knew it, and George Lucas knew it.

Archetypes like from Star Wars have been enriching art and the human experience since our first ancestors gathered together by firesides long ago and told stories to each other. Story and art are their own kind of force.

This Star Wars Day, May the 4th be with you!