How Art Saved His Life: Story of Horace Pippin 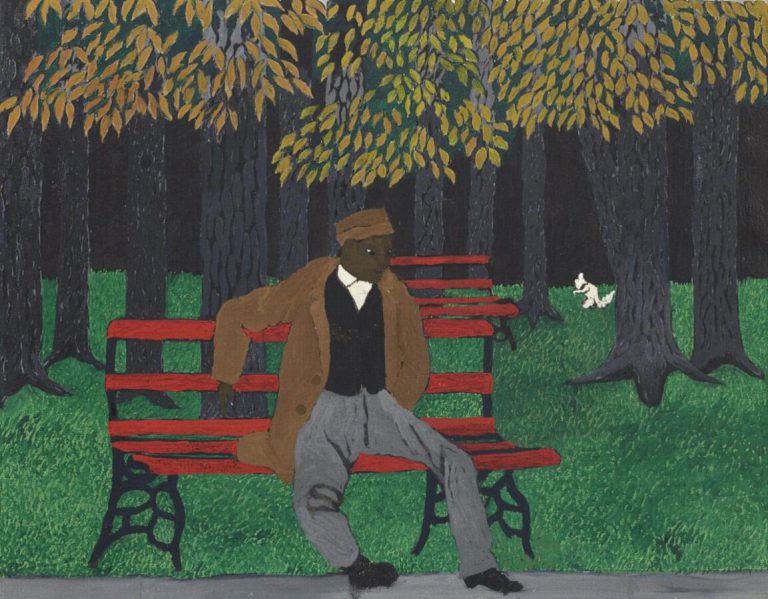 It took Horace Pippin 43 years to complete his first oil painting. Why so long? Because poverty, hard physical work, war, and disabilities got in his way. Yet, all the negative experiences didn’t diminish his passion for drawing and at the age of 50 this passion eventually paid off. Here is the story of how Horace Pippin became famous.

A Box of Magic Crayons

Horace Pippin was born as a free man only 23 years after the official end of slavery in the United States. His grandparents, however, were slaves and Pippin carried their suffering in his genes. His parents, who worked as domestic workers, couldn’t afford basic school materials. This meant that little Horace had to find his own way around the problems. So he decided to take part in many drawing competitions and in one of them, when he was ten, he won a box of crayons. As a result, this prize allowed him to continue coloring, an activity he loved.

Sadly, he couldn’t continue drawing for much longer. When he turned 14, he had to leave school to help his parents make ends meet. He did everything he could: working as a hotel boy, an iron molder, and even as a farm helper. And he continued working until the year in which American merchant ships were sunk by the German fleet and president Woodrow Wilson asked the Congress to declare the war on the Central Powers. Consequently, young and healthy American men were sent to Europe to fight the war and 29-year-old Pippin was among them.

No Combat with Black Men

Pippin was assigned to the 369th Infantry Regiment, a division of African American soldiers. This division was later joined by the French Army, since many white American soldiers refused to march with black men. In the painting above Pippin touches upon the issues of segregation that he suffered in the army and observed in his environment. You can see him as one of the soldiers, wearing a World War I uniform.

His battalion was one of four African American regiments to see combat and Pippin, set in the front line, was shot in the right shoulder. He described this experience:

I will say this much, I say no man can do it again. He may have the will but his body cannot stand it. I could tell a new man every time I seen him, for he would duck every time a shell came over.

Although the wound might have saved his life, he became disabled, which prevented him from finding any proper job on his return to West Chester, Pennsylvania. He barely made a living.

Now married and doing some odd jobs for a few pennies, Pippin found for himself a way to deal with the horrendous memories of the war and the frustrating present situation: he began to draw again. First on discarded cigar boxes or by burning images onto wood panels using a hot poker. Later, he turned to oil in 1928. Painting had become his mental and physical therapy. To paint, he held with his left arm the right wounded arm, which was clasping the brush. It took him three years to complete the first painting. Initially, he would produce a maximum of three or four paintings per year.

The story of Horace Pippin received attention around 1938 when MoMA included four of his works in a traveling entitled show Masters of Popular Painting. They hit pay dirt as in the early 1940s, the fascination with “folk” and “naive” art was growing in the US. And since Pippin didn’t have any formal training and began attending drawing classes only after the show of 1938, he perfectly fit the “primitive” category with his flat bright colors, simple perspective, and lines. However, according to scholar Cornel West, the “primitive” lens, with which Pippin’s work had been viewed for years is in fact:

“I Tell My Heart to Go Ahead”

Hence, nowadays we should step away from harmful categorizing and look with fresh eyes at such painters like Pippin. His drive and passion for painting saved him from falling apart after the war and the lack of professional training was not even an issue for him. Because the need to express what came to his mind was stronger and this strength we should remember above all.

The pictures… come to me in my mind and if to me it is a worthwhile picture I paint it… I do over the picture several times in my mind and when I am ready to paint it I have all the details I need.

Just as Pippin was becoming famous (solo shows in Philadelphia, New York, San Francisco, and Chicago) and museums began buying his works, Pippin died in 1946. However, in the last year of his life, he produced 75 paintings! What a leap from 3 to 75! Horace Pippin was indeed a man of great perseverance and patience which, in the end, bought him recognition and respect.