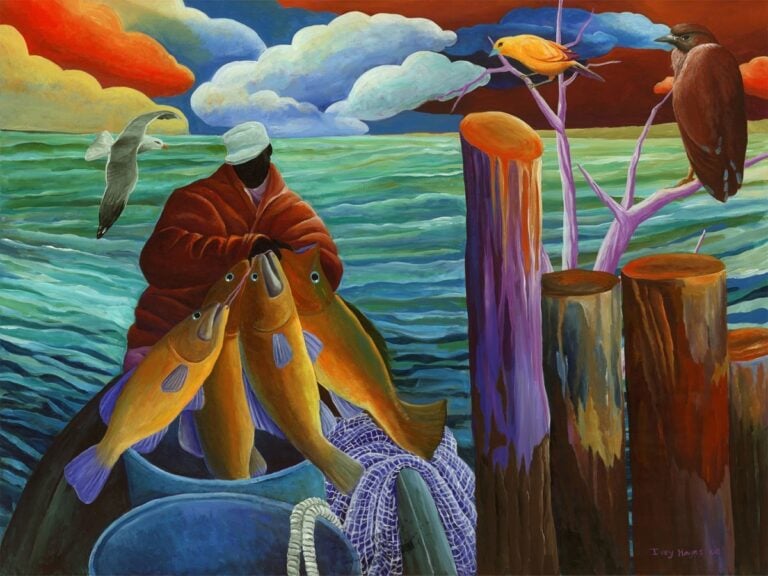 A vibrant perspective of Ivey Hayes’ art has always stood out in my mind. Before his death in 2012, the South Eastern North Carolina artist was known for creating vibrant paintings from his unique perspective. Unlike my interactions with the art of Minnie Evans, I actually had the opportunity to meet Hayes at an annual Spring festival along the Cape Fear River of Wilmington, North Carolina. It must have been my birthday because he ended up giving me a postcard-sized print of one of his paintings – thereby starting an early appreciation with his work(s)! I recently stumbled across that print and thought “who better to share with but you, lovely readers!”

Although Hayes picked up drawing at a very early age, he said that he did not get a vision for his most famous style until later on in life. He was diagnosed with rheumatoid arthritis, rendering his fingers and hands gnarled; his ‘faceless’ paintings are fluid, filled with color, and historical significance. The paintings are filled with African themes, colors, and people. Likewise, they are reminiscent of an age gone by, with scenes of Jazz music or cotton picking.

They are filled with geometric patterns and silhouettes. Unlike Minnie Evans’ work, Hayes’ work is more discernible in nature. But what is evident, is that they both received visions of some sort. The visions took over them and they had to paint or draw, allowing the colors to be the focal point of their respective works. Although he painted in an abstract manner and heavily with acrylics and oils, the artist showed great strength with realistic watercolor portraits that are worth discussing too, as they are a part of his larger overall oeuvre.