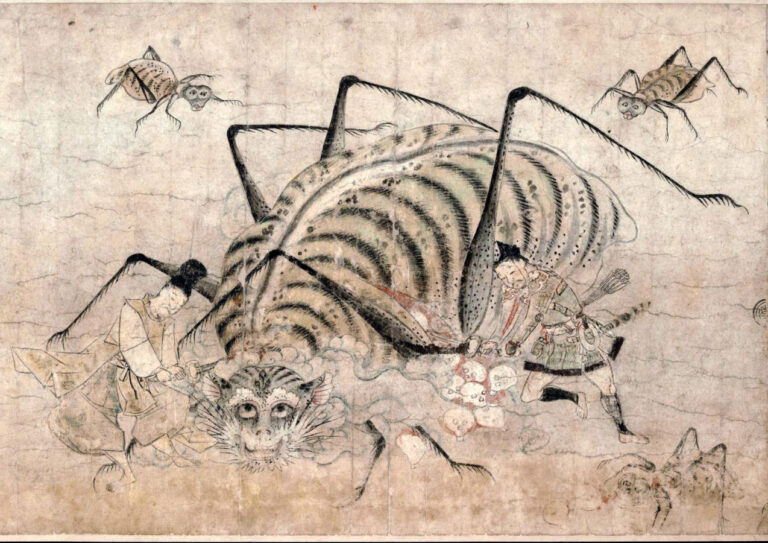 Spiders disturb the majority of the people. Even though they are much smaller, and thus much less powerful than us, we cannot help but fear their presence. Perhaps it is the horrid looks that do not fit our aesthetic, or perhaps the fear of the unknown; not knowing just when and where they might appear. Whatever it might be, spiders appear many times in myths and in art throughout history, symbolizing both positive and negative concepts.

When talking about spiders, one of the first things that comes to mind is the superhero classic Spider-Man. There have been hundreds and thousands of comic book issues, cartoons, and many movie reboots of Spider-Man since the publication of the first issue in 1962. Many different writers and artists elaborated on his origin and all the relevant characters, altering the story in new directions. After more than five decades, Spider-Man is still a huge part of pop culture, being easy to identify with for most people.

Tsuchigumo is a yokai, a mythical Japanese monster, which appears in stories as a giant spider. It uses its shape-shifting abilities to lure its prey.

One appearance of the said creature is in the picture scroll Tsuchigumo Soushi. Here it is disguised as a beautiful woman. Yorimitsu and his servant Watanabe no Tsuna are in a mansion that seems to be haunted by many eerie creatures. In later parts of the story, an appealing woman pays a visit to Yorimitsu. Yorimitsu is in awe because of her beauty, however, he sees something weird about the woman and senses the danger. He strikes his sword at her and the woman disappears, leaving a trail of blood behind. Yorimitsu and his servant follow the trail to a cave near a mountain, where they find a gigantic spider. After they slay the Tsuchigumo, many smaller spiders and skulls emerge out of its body.

Tsuchigumo Soushi is an excellent example of otogizoshi emaki, picture scrolls of short stories. Although the scrolls are usually painted in a simple style, this particular scroll shows painting styles of yamato-e, classical Japanese painting style, and the Kamakura period, which are more intricate in comparison to styles of other scrolls. Kamakura period artists favored the warrior class, and a more realistic approach was preferred.

In this depiction of Tsuchigumo, Yorimitsu can again be seen, this time laying sick in bed. Two of his servants, Watanabe no Tsuna and Sakata no Kintoki, are seen playing Go. Go is two-player strategy game played on a square board. The other two, Urabe no Suetake and Usui no Tadamitsu, are gazing at the flow of demons conjured by the spider. This can be seen behind Yorimitsu. This piece is a woodblock print, common in Edo period when Japan was isolated from the rest of the world because of the restrictions put by the government. Artists in this period cherished and transformed the styles of the past.

Aside from being the goddess of wisdom, Athena was the head of the spinning and weaving industries. She was said to be unmatchable in the art of weaving. According to the myth, Arachne was a pupil to whom she taught weaving, and also whom she later challenged. Athena, however, was defeated by the mortal. Devastated by this unexpected turn, and with the madness brought upon one when pride and loss mix together, Athena struck Arachne on the forehead with the shuttle that was in her hand at the time. Arachne was deeply offended by this act, and so she hung herself. Athena later turned her into a spider, doomed to weave exquisitely, but forever.

It is thought that, though not for certain, the Baroque painting Las Hilanderas by the Spanish master Diego Velázquez, portrays said myth, hence the popular name The Fable of Arachne. Athena can be seen in the background with her helmet, standing in front of Arachne’s embroidered piece for the competition, in this painting shown as famous Titian’s The Rape of Europa.

Spiders have their stable and strong place in the mythologies of many different cultures around the world and thus they became a motif of many works of art. From ancient mosaics through Japanese woodblocks spiders to contemporary pop culture, they are still present causing fear and admiration.