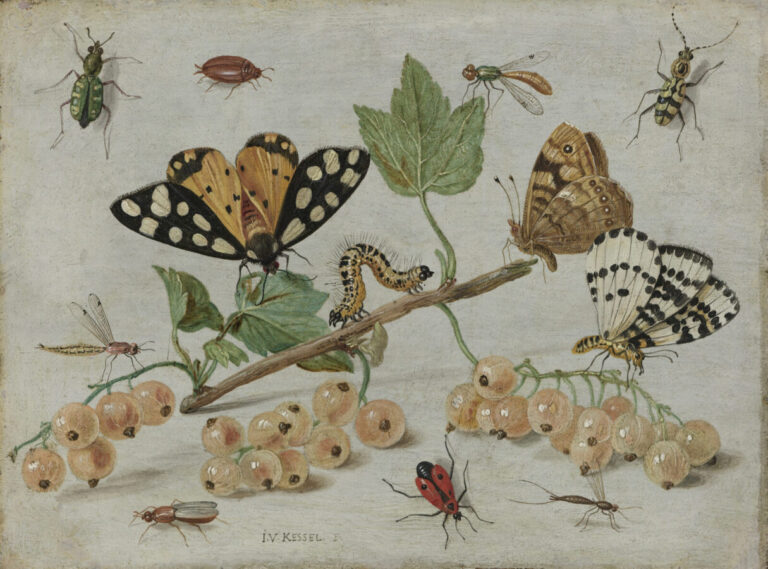 Creepy-crawlies: bugs, lizards, and insects. You either love them or hate them. But one place you may have thought they wouldn’t appear is in fine art, from some of the great artists of all time. But even there, a fly may find a way in. Begin seeking out the ways in which all these bugs and reptiles, such as ants, salamanders, spiders, butterflies, and even a snail, have crawled or flown their way into paintings.

The look of disgusted anguish says it all. In this painting by Italian Baroque master Caravaggio, a young boy is seen withdrawing his hand, with a gesture and expression of fear and disgust, from a lizard, which has apparently just bitten him. There are two, nearly identical, versions of the painting. Both of them easily express what we would all feel if a lizard were to give us a hearty bite.

The Virgin Mary lovingly looks down at Christ, but then – what is that? Is Christ firmly holding onto a thread which in turn has trapped a dragonfly? It may seem odd to the modern viewer, but the Master of Saint Giles knew that Medieval viewers would associate the dragonfly with Satan. Therefore, with Christ keeping a hold on it, this demonstrates his triumph over Satan.

The famous Spanish surrealist artist brought his all in this slightly disturbing, quite eerie painting. The melting watches are grotesque, but the ants in the foreground bring another level of interest to the scene. The watch in which they are positively crawling over must be decaying, since they swarm on it as they would with rotting food.

This painting by an unknown artist originating from Swabia (a region in southern Germany) is masterfully done. For example, the headdress with realistic angular folds and creases and the stark difference between the sitter and background come together to create an impressive portrait. Atop the calligraphic headdress, however, is something rather odd: a fly. Perhaps the artist was demonstrating their skills to an almost boastful extent by suggesting that even a fly could land on the portrait, mistaking it for an actual headdress.

Looks very lovely, yes? The story of Cupid and Psyche is one of fear, devout love, and tragedy. But the French Neoclassicist painter, Gérard, decided to depict a tender moment between the two lovers. For those who know Greek, it may not be surprising to see a butterfly above the beautiful Psyche, since the word for butterfly is “psyche.”

This famous Flemish painter’s style is easily recognizable, although he has never been known by name. This portrait of both him and his wife shows a simple table spread of a pitcher, bread, a vase of violets, and a bowl of cherries. There are also flies. Yep. The Master of Frankfurt used trompe l’oeil – an optical technique to make a painting seem three dimensional, often used in heavenly paintings – through flies, to make his painting appear to be real, and not an actual painting.

The 20th century Mexican artist, Frida Kahlo painted in a blend of realism, surrealism, and naïve folk art. She was famous for her self-portraits, just like this one. Here, she painted herself with her pet parrot, Bonito. But that is not all there is to it. On the leaves which surround Frida are one, two, three caterpillars crawling around. There is even the silhouette of one through a leaf. Frida added a butterfly into the mix, as well, upping the aesthetics.

Jan Davidsz de Heem expressed the Flemish and Dutch interest in botany and celebrating the natural world as God’s power and love through this still life. Beautiful and abundant, especially with a butterfly and caterpillar symbolizing resurrection, there is also a creepy little salamander greedily eyeing a salamander and ants. A moth and a snail are all also seen, representing darkness. Or just plain creepiness.

This portrait of a monk of the Order of Carthusians or the Order of Saint Bruno by the famous Early Netherlandish painter, perhaps best known for his Annunciation, Head of Christ, and A Gold Smith in his Shop Early, is one of heightened reality. For example, the lit background and the turn of the monks’ head all help add depth to the portrait. But Christus went a step further; on the trompe l’oeil frame, Christus added a fly. Just as the fly does in the Portrait of a Woman of the Hofer Family, this creepy-crawly serves to dismiss the idea that this is a painting. Instead, the viewer is looking at the monk himself, and a pesky fly got in the way.

Not So Sweet Honey Bee

The French Neoclassical artist, Ingres, who despised Romanticism, painted this very lavish portrait of Napoleon. While the painting itself was received with criticism – as looking almost too severe and even gothic – Ingres did, of course, add bees. Bees? Embroidered with golden thread on his red velvet cape, Napoleon’s chosen coat of arms, the honey bee, can be seen. Napoleon chose the bee because it symbolizes hard work, dedication, diligence. But he chose the honey bee precisely because they are known for producing sweet nectar – as Napoleon believed he would for the people of France.

Be it flying or crawling their way in, these creepy-crawlies may be in the paintings symbolically, to add depth or a sense of reality, or simply to come in and give a quick nibble. But one thing is for certain: they are here to stay, as these bugs won’t be scared away by bug-spray.