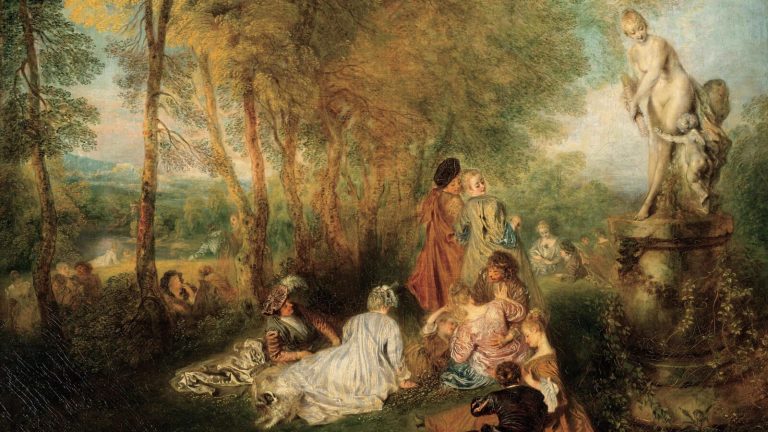 Masterpiece Story: Pilgrimage to the Isle of Cythera by Jean-Antoine Watteau

Feast of Love is a beautiful painting by Jean-Antoine Watteau that explores the themes of love and impermanence. It holds a polished mixture of urban elegance and rural naturalness. Feast of Love is a masterpiece of early 18th-century French art and the Rococo style.

Jean-Antoine Watteau left his hometown of Valenciennes, France at age 18 in 1702 to seek an artistic career in Paris. He struggled for 10 years, but he was finally admitted into the Académie Royale de Peinture et de Sculpture (Royal Academy of Painting and Sculpture) as a student in 1712 at age 28, and an official member in 1717 at age 33. Despite being considered a late bloomer for an emerging artist in 18th-century France, Watteau would intensely influence the European art world with his colorful and elegant style. However, his dramatic impact was cut short by his premature death in 1721. Watteau was only 37 years old, but his legacy still endures today.

Watteau was painting Feast of Love approximately from 1718 to 1719. It is an oil painting on canvas measuring 24 by 30 inches or 61 by 75 centimeters. The painting is a fête galante or elegant party, a theme invented by Watteau in 1717 with his Pilgrimage to the Isle of Cythera. The theme consists of a stylish outdoor party with gatherings of couples in the pursuit of love and entertainment. The fashionable people are surrounded by a grand, rural but agreeable nature with cultivated elements such as trees in allée (formal line) and a piece of classical statuary. Feast of Love holds a refined mixture of cosmopolitan sophistication and agrarian simplicity.

Dominating the right side of the scene is a statue of Venus and Cupid. Venus is the goddess of love and her son, Cupid, is the god of desire and attraction. Venus has a beautifully svelte and curvaceous body. She possesses long limbs and large eyes. She laughingly takes the arrows away from Cupid as she smiles at him with a motherly rebuke. Cupid grabs for the arrows, but he will soon succumb to his mother’s request. Cupid has shot plenty of arrows into the hearts of the people below. His arrows have inspired desire and attraction for each other, and Venus, seeing how much love is afoot, is preventing Cupid from continuing. She has a mockingly pleased smile as she looks upon her amorously mischievous son.

The most interesting couple in the composition sits on the ground to the left of the statue’s base among the other sitting couples. The woman is wearing a pink dress and has her back to the viewer. The man is wearing brown and faces the woman and the viewer. There is a small child leaning towards the woman and appears to be playing with the woman’s hair. What is so fascinating is how Watteau expresses the people’s thoughts through their hands. The man has his left arm and hand wrapped around the woman’s lower back. He is pulling her towards him for perhaps a kiss or more. She, however, declines his advances. She places her right hand on his chest and pushes him away as she strains her head and neck to the left.

However, despite the opposite desires, there is no violence in the couple’s gestures. This is not a woman being forcefully persuaded. This is the give and take of a couple who are in love with one person desiring kisses and lovemaking while the other is not in the mood. Lovemaking is about good timing, and the man may be simply choosing the wrong moment. Perhaps the child beside the couple is their daughter? Perhaps this is why the child so lovingly and delicately brushes the woman’s hair aside? Is she oblivious to her parents’ actions? Perhaps this is why the woman is gesturing no as if she is saying “not in front of our daughter.” Is this a small family scene among the scenes of childless lovers? The mystery is fascinating.

Jean-Antoine Watteau was a master of light, color, and shadow. The feathery lightness of his trees in Feast of Love is brilliantly delicate. The loose brushstrokes of yellow, amber and brown paint create the effect of filtered light as it ripples through the tree leaves. We witness the golden hues of sunshine found in the late afternoon or early evening when the sun sets lower on the horizon, the light is softer, and the shadows are more muted. Patches of blue sky are viewed through the trees and above Venus, but they are mottled with wispy clouds of white delicacy. The soft light glimmers on rustling fabrics as it reflects on smooth surfaces but darkens on sharp creases and folds. The light allows beautiful contrasts of shimmers and shadows.

The Royal Academy of Painting and Sculpture was artistically divided when Jean-Antoine Watteau joined the discussion. One-half of the artists believed in the strong tradition of form as modeled by Nicolas Poussin, a founder of the Classical French Baroque. The form was an emphasis on lines and drawing. They were known as Poussinistes. However, the other half of the artists believed in the prominence of color as modeled by Peter Paul Rubens, a founder of the Flemish Baroque.

Color was an element of movement and sensuality. They were known as Rubénistes. Watteau was definitely a Rubéniste and supported color over form. Through his colorful loose brushstrokes, Watteau captured the dramatic feelings and passions of mankind. The warm flesh, the cool fabrics, the hard marble, and the soft ground add to the sensory delight. Feast of Love is a sensory experience with its tactile quality and implied whispers of love.

Jean-Antoine Watteau captures a youthful, pleasurable, and luxurious atmosphere in his paintings. They are frequently populated by young amorous couples in beautiful clothes, divine weather, and the most flattering light. However, there is an undercurrent of melancholy and bittersweetness. Watteau’s images are beautiful, but they are fragile. Is it because today’s happiness could be tomorrow’s sadness? Love has no guarantee and therefore can be fulfilling but fleeting. Feast of Love captures love. It is beautiful, but will it last?