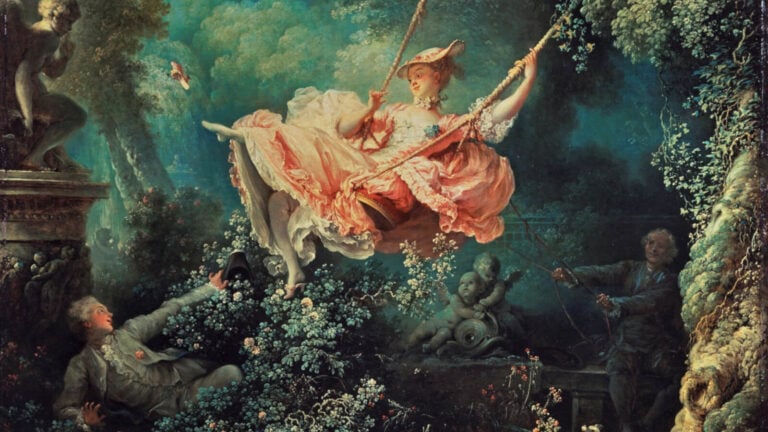 7 Things You Need to Know About Jean-Honoré Fragonard

Money, power, and sex were the three most basic desires of 18th century France. To be considered successful you needed to be rich, influential, and attractive. The French aristocracy continually worked towards these three idols by gaining funds, titles, and lovers. The Rococo age was a time of self-indulgence, where greed was good, and more was better. Being modest, unimportant, and chaste were cynically abandoned for the luxurious world of material comforts and easy virtues. Jean-Honoré Fragonard explores the three basic desires of money, power, and sex through his masterpiece, The Swing.

“Money, money, money. Must be funny. In the rich man’s world.” As ABBA, the Swedish pop group, once famously sang, money can open lives to undreamed possibilities. Fragonard’s The Swing oozes with glamorous possibilities all funded by money. Elegant possibilities include fashionable clothes, exclusive amusements, graceful living, romantic adventures, and financial independence. All of these possibilities are evident in the painting. The lady and two gentlemen are fashionably clothed in the latest style. They are spending valuable working hours outdoors in lazy pursuit. They are stress-free, smiling, and happy. These people are the idle rich.

The affluent aristocracy portrayed in The Swing are like three actors in a French comic opera. They each have a role in the story that is unfolding. The gentleman in the bottom right corner represents money. He is a noble, and he is a married man. He is well-dressed in his sombre attire and white powdered hair. His smiles affectionately at the lady in the swing. He is much older than the young lady, and looks at her with kind but possessive eyes. He is her much older husband. He is rich, and that is how he has gained her in marriage. The ropes in his hands represent the ties of matrimony. She may swing away but the marriage ties always pull her back to her husband. They have a mariage à la mode, or fashionable wedding, based upon money, not love.

The centerpiece of this painting is a beautiful aristocratic lady dressed in opulent fashion. Silk, ribbons, and lace adorn her clothes while a coy bergère hat rests on her delicate head. Expensive white stockings clad her legs while pink pump shoes highlight her delicate feet. She is a vision of loveliness. Youth, grace, and charm touch her with their gifts. She is majestic through her exquisite femininity. She is a moving ball of warm pink against a cool background of turquoise shade. The lady represents power.

The gentleman in the lower left is young and virile. He is in the prime of life and wants to experience the pleasures of his lady love. He is her suitor. He represents sex. Is it no coincidence that the suitor with carnal desires is lying amongst the flowers on the ground hidden from the husband? He takes the opportunity to look upwards at his lover, and to look inwards at her petticoat. You cannot see anything from the viewer’s perspective except the lady’s legs and stockings, but from the tilt of his head, the angle of her dress, and the smile on his face, the young lover is viewing more than what is respectable. With this realization, Fragonard’s The Swing takes on highly erotic overtones, and is quite scandalous in its subject. We have a cheating wife who is allowing her concealed lover to take a peek at her underwear, if she is wearing any…

The statue painted above the lover is Seated Cupid. A contemporary sculptor, Etienne-Maurice Falconet, created this famous statue in 1757 for King Louis XV’s mistress, Madame de Pompadour. Seated Cupid raises his hand to his lips and gestures toward the lady in a knowing signal that he knows her secret. The statue represents discretion and secrecy, the two things needed if the lady’s love affair is to survive. Voltaire, the celebrated philosopher of the Enlightenment, upon seeing this statue once said, “Qui que tu sois, voici ton maître” or “Whoever you are, here is your master.” Love conquers all, and in The Swing it fuels the drama!

Jean-Honoré Fragonard was the most prolific French painter of the 18th century. Throughout his extensive collection of paintings he captured the morals, values, and pleasures of the French aristocracy. His spirited colors highlight the spirit of the age. His confidant brushstrokes highlight the confidence of the subjects. Fragonard’s paintings are consistently high quality work. The soft lighting and pastel colors of turquoise blue, saffron yellow, and rose pink blend together to convey the painting’s theme of sensuality. The intensely romantic landscapes filled with shaded leaves and flowers prefigure the landscapes of 19th-century Romanticism.

While the sensuality of Fragonard was later condemned as frivolous during the French Revolution and early 19th century, it was later recognized as a form of humor, light-heartedness and wit. Jean-Honoré Fragonard captures the basic desires of money, power, and sex in The Swing. This is a Fragonard masterpiece. This is a forbidden love.