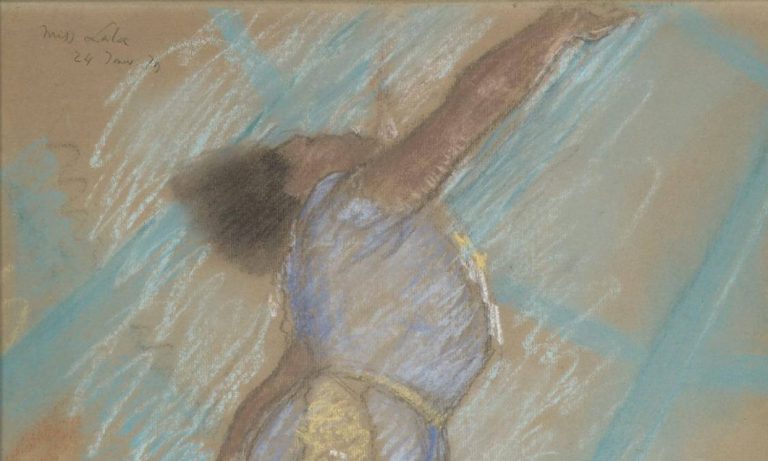 Feats of strength, super flexibility, the ability to hold one’s breath for long periods of time, combine all that with lions, clowns, and a ring master and you get what we know of as a circus. Circuses have entertained millions of audiences throughout history. Even well-known artists did not miss out on the fun. One such artist, Edgar Degas, painted a famous circus entertainer: Anna Olga Albertina Brown, more commonly known as Miss La La. Though he drew up many sketches, Degas’ produced only the one painting of his time at the circus.

The Cirque Fernando, originally built in 1875, was close to Degas’ own home in Paris. Besides Degas, other impressionist artists such as Renoir, Toulouse-Lautrec, and Seurat all visited the Cirque Fernando and painted subjects from within its walls.

Who was Miss La La?

Anna Olga Albertina Brown (born 1858 in former Prussian territory), known in the cirque as ‘Miss La La,’ was a circus performer of mixed race, her father was black and her mother white. The petite virtuoso began performing at an early age and participated in many different circus acts.

But perhaps what she came to be known for were her feats of strength, of holding things (a canon or herself) up with her teeth, as shown in the below poster.

She was known by various stage names as she traveled throughout England and France. Of these stage names, most if not all, pointed to the European obsession with the ‘exotic.’ Some examples are the Venus of the Tropics, the African Princess, the Black Venus, Femme Canon, L’affût vivant, and La Mulàtresse-Canon.

Degas at the Cirque Fernando

We mostly know Degas from his many sketches and paintings of life in Paris and, of course, his many ballerinas. While active in Paris, the impressionist artist took time in 1879 to visit the Cirque Fernando. Not only did he focus on the performer, but he also took the time to detail the intricacies of the building itself.

Before Degas painted the daring performer, he produced over 20 sketches as he visited consecutive nights in a row. They are all in various stages of production and mediums, leading ultimately to the painting’s inclusion in the Fourth Impressionist Exhibition in Paris in 1879.

What is unique about this painting, and the earlier sketches is the angle at which Degas painted Miss La La. She is foreshortened and is ascending as the rope pulls her upward.

Some scholars believe Degas used his knowledge and appreciation of Italian art to depict Miss La La as a Saint ascending into the Heavens. The focus here is not on her face as we cannot see it. Instead, the focus is on her pose and costume of which we are given a better view. Furthermore, the ratio of her figure to the amount of the background depicted, gives the viewer a sense of being right there in the Cirque’s audience.