Eerie, Haunting and Below the Sea: DeCaires Taylor’s Underwater Museums 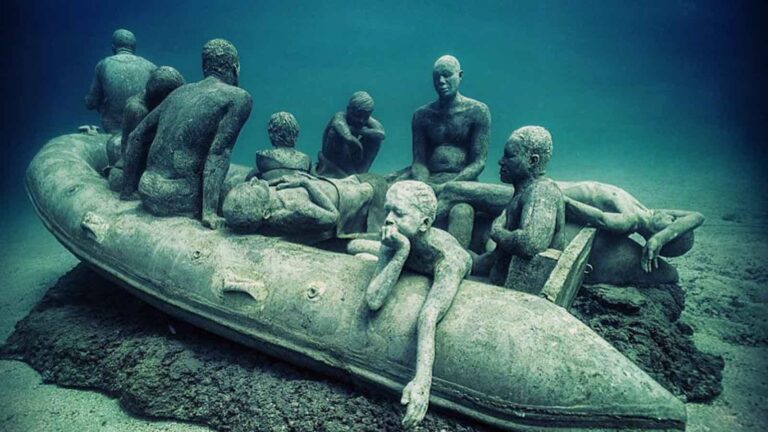 In 2006, British artist Jason deCaires Taylor installed the first undersea sculpture park in the Caribbean. Since that time he created several other sites including ones at Cancun, Mexico, the banks of the Thames in London and the waters of Canary Island Lanzarote. Taylor's unique installations are a culmination of his skills and experiences as a sculptor, conservationist, and scuba diver. He is a key contributor of the eco-art movement.

Born in 1974 of an English father and Guyanese mother, Taylor studied art in London. He became a full-time artist at the age of 30. Inspired by his work as a scuba instructor and passion for ocean conservation, each undersea park and museum is a dialogue of art, science and the relationship between humans and nature. He deals with modern themes of climate change, pollution and immigration and is recognized internationally for his environmental and political work.
[caption id="attachment_16931" align="aligncenter" width="1000"] 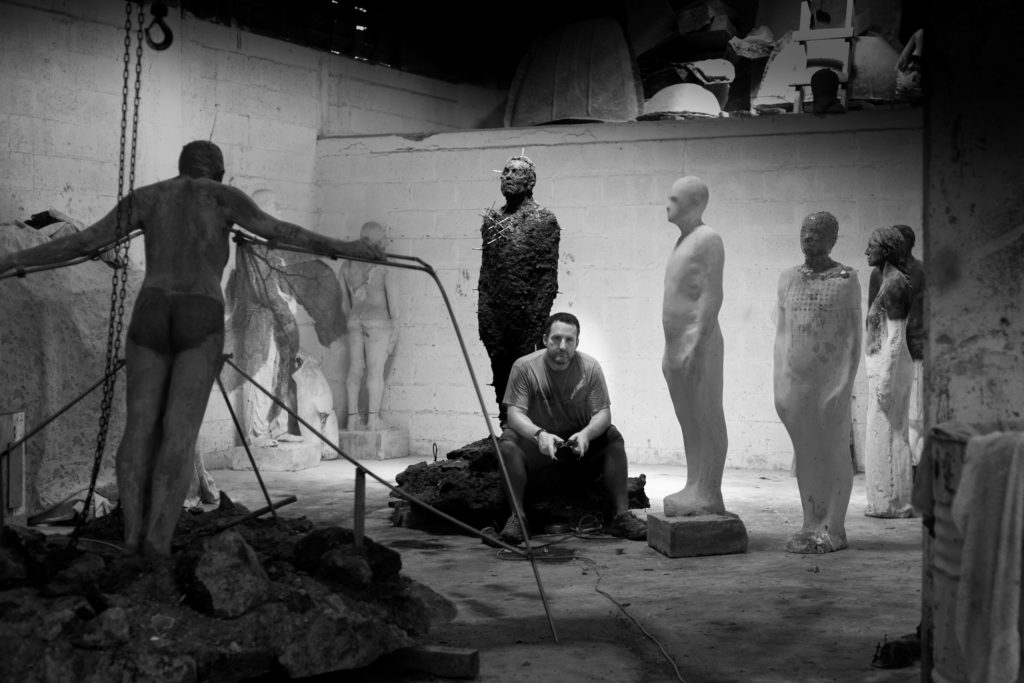 Jason deCaires Taylor, Self-portrait in studio, 2013. Source: Installation Magazine[/caption] The sculptures are made from a special pH-neutral cement with a texture that encourages growth of coral and habitation of underwater creatures. The corals, sponges, fish, crustaceans and worms live on and alter the surface of the statues - the sea claiming the works, altering and engaging with the pieces in a completely organic way.
The underwater parks display up to 400-500 life-size sculptures, cast from local people, trees and even cars. Having the ocean as the exhibition space means a constant change of environment. There are schools of fish that swim by, and shifting tides, lighting to the sandstorms that whirl through and engulf the statues in clouds. Visitors access the sculptures through diving, snorkeling or glass-bottom boats. An added benefit is these parks are located near coral reefs and are able to divert a lot of attention.

The Raft of the Lampedusa 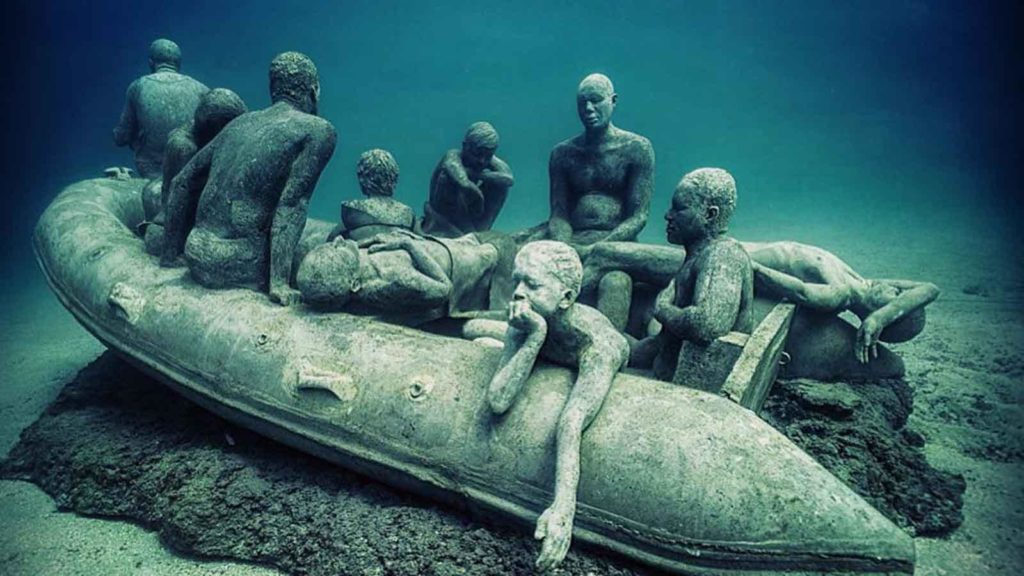 Jason deCaires Taylor, Raft of the Lampedusa, Lanzarote, 2016. Source: boatshopping[/caption] The Raft of the Lampedusa resting on the floors off of Lanzarote is a homage to Théodore Géricault's Raft of the Medusa (1891). 13 bodies piled in an inflatable raft. In Taylor's words, the work is not intended as a tribute or memorial to the many lives lost but as a stark reminder of the collective responsibility of our now global community. 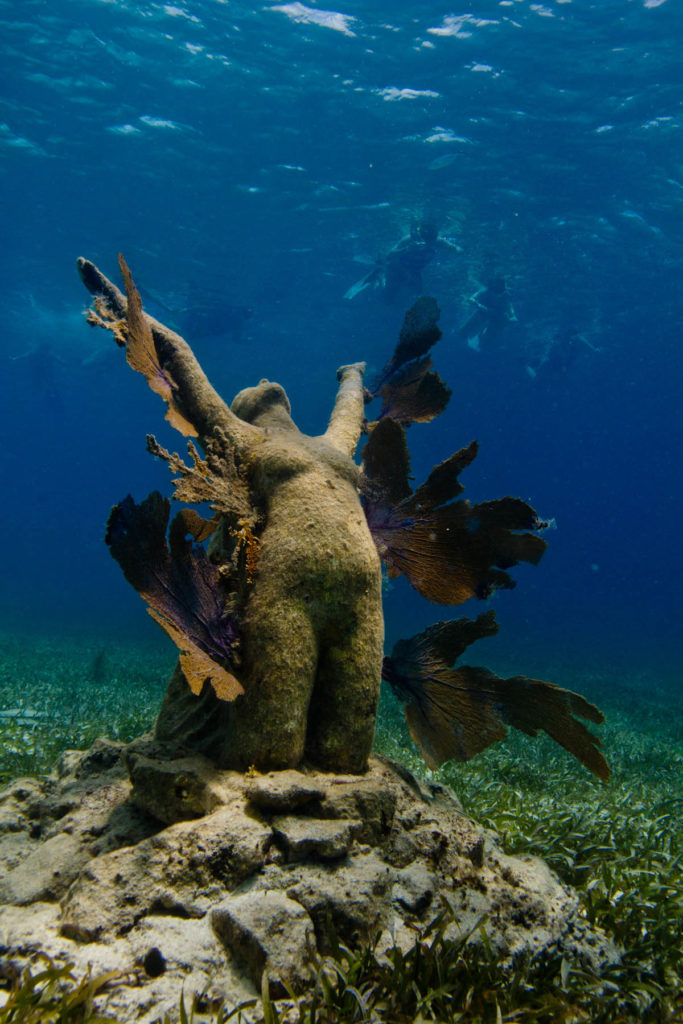 Jason deCaires Taylor, Reclamation, MUSA, Cancun, 2009. Source: musamexico.org[/caption] Infusing hope and phoenix-like resurrection is Reclamation. Purple sea fans spread and filter the water. It offers a sense of revival to the viewer and home to the ocean life teaming on its surface. 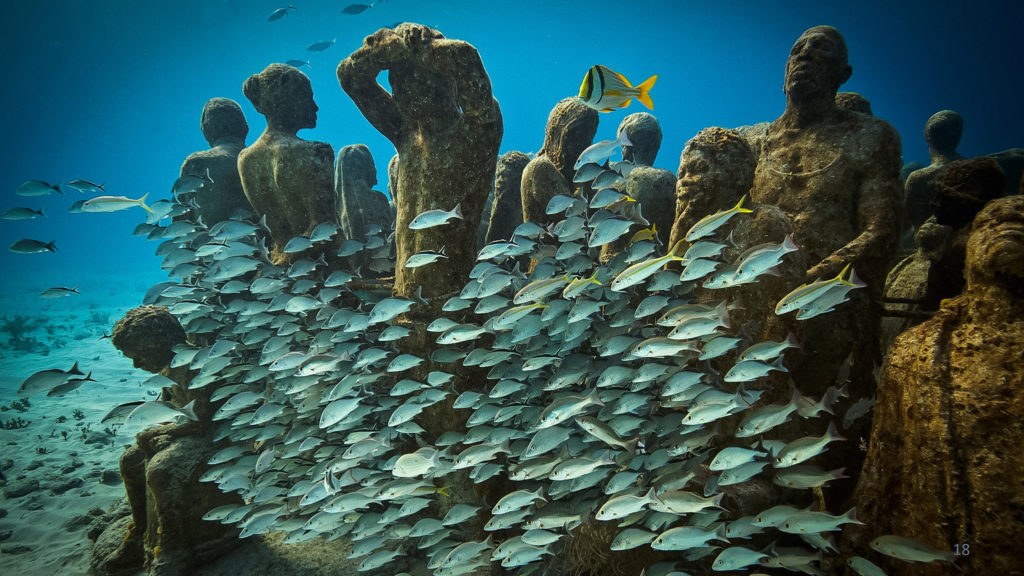 Jason deCaires Taylor, Silent Revolution, MUSA, Cancun, cement, 2010. Source: ted.com[/caption] Silent Evolution in Museo Subacuático de Arte off of Cancun, was one of the most provocative pieces - with 400 casts of locals grouped together. The scale and weight were massive. They are a key example of the awareness and conservation these parks are working to create.
[caption id="attachment_16930" align="aligncenter" width="683"]

Jason deCaires Taylor, Crossing the Rubicon, Lanzarote, Museo Atlantico, 2017. Source: artimage.org.uk[/caption]
This stunning piece is an example of how the sea life alters and changes these grey cement statues into living coral habitats.
More sites being planned. And it is a beautiful, inspiring project to see how the creation of art can better our oceans. Taylor's desire to preserve and protect the oceans is realized in each installation. He creates in defence of the sea. Like all museums, these below the water are conserving precious treasures.