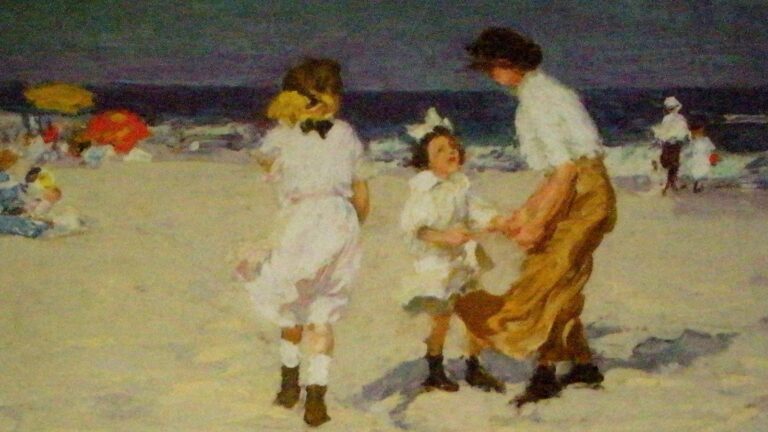 Seaside Fun and Lots of Nudes: Bathing in Art

This seems to be the perfect painting depicting summer vacation. It is titled Ocean Breezes and was painted by Edward Henry Potthast in the first years of the 20th century. It’s a wonderfully vivid work, showing two girls and their mother caught up in the breeze at the beach.

Standing in front of it, I could almost feel the strong ocean breeze since Potthast’s vigorous brushstrokes embody it so well in the three figures’ wavy shapes. I also imagined that I could hear the smaller girl crying, “Mommy, I’m cold!”. Her body language is one of the most vivid and interesting parts of the painting.

Edward Henry Potthast (1857-1927) was an American Impressionist. He must have really loved the beach since he painted dozens of seaside scenes. Some of them are traditional seascapes, strongly focused on the water itself, but most aren’t. Instead, Potthast’s works are usually full of people enjoying the beach. They show many characters, who are wading, swimming, playing, or resting under colorful umbrellas.

Potthast’s seaside landscapes are bright and cheerful, full of eye-catching colors. Some include sailboats’ elegant silhouettes. Potthast’s seaside paintings evoke a high-summer day at the beach, perhaps recalling the viewers’ childhood memories. His beach-goers are often shown from the back or the side, their faces turned out of sight. This choice might seem alienating but, this simply makes a viewer feel that they’re part of the action, maybe thanks to that they can enjoy the beach themselves.

Although Potthast’s works are full of people, the artist was very shy and liked to keep to himself. He was born in Cincinnati, Ohio and started his career in commercial lithography. He visited Europe twice, first studying in Munich, Germany and later in France.

During this second trip to France, he became interested in both Barbizon landscape painting and French Impressionism. Starting in the 1890s, he painted as an Impressionist. He moved to New York City in 1895 and stayed there for the rest of his life. He loved to paint people enjoying Central Park and Coney Island, but he also liked to spend his summers painting New England beach destinations like Cape Cod, Massachusetts and Ogunquit, Maine.