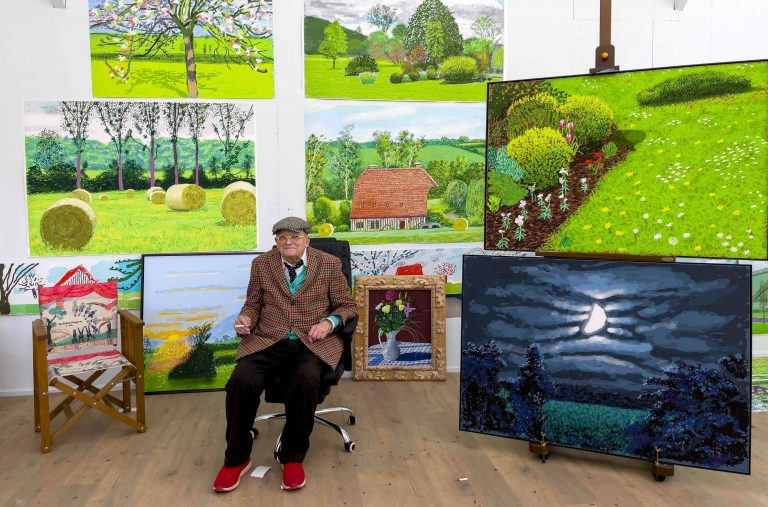 David Hockney and the Camera: A Composite Polaroid Reality

David Hockney and His iPad Landscapes

It’s often hard to grasp what some great artists do when they turn into elderly living legends. Their works from half a century before are constantly moved from one exhibition to another, around the world. All of their older works sold off to museums and private collections, meanwhile new pieces gather dust in a corner of the studio. These works are likely to be considered flimsy repetitions of their best achievements or not very successful ventures towards the new. However this is not the case with David Hockney, a famous British artist who is still active and keeping up to date.

Hockney doesn’t struggle to innovate and redefine painting. Instead, he just keeps doing his thing, using new tools. He always willingly adopted new technologies. Smartphones and tablets are no different. He started working on an iPhone in 2009 and soon after that, he also started using an iPad. Hockney is a child of a screen in a way. From the beginning he let photographic and cinematic pictures slip into his visual world. It’s no wonder he uses touchscreens now.

His strength is his ability to use them in a meaningful way. They could also become subjects of the works. Still life with digital devices? Why not. The picture above is quite interesting. The electrical outlet reflected on a smartphone looks like a classical theater mask and also a bit like the face from Munch’s Scream. It seems to be a quick sketch, which shows that for Hockney the electronic devices he uses are not just fancy high-tech toys. They are meaningful both as a medium and as a topic. It’s just a picture of a charging phone lying on a book but conceived by an experienced artist who can look at ordinary things a bit like old masters from the Netherlands did; being able to encapsulate existential undertones in them.

In Hockney’s big series of portraits, what changes everything is the tiny details. Hockney’s sitters – mainly family and friends, some of them being famous artists – rest in the same chair with the same background. They are all painted on same-sized canvases. All these similarities allow us to see differences between the individuals. Each of the portraits were made entirely during three-day long sittings.

The series of card players is Hockney’s tribute to Paul Cézanne. At first, Hockney painted the scene. Which was, well, quite obvious for a painter referring to another painter. In the end, he decided to photograph it instead. Although the artworks are made in different mediums, it is not just the iconography that connects them together.

Cézanne is known for his deliberate distortions of the rules of perspective. It was one of the reasons why he became a kind of an informal patron of Cubism. Just as Cézanne did in his paintings, Hockney does in his photos. He shatters the scene into pieces. He literally photographs one element after another, separately: background, floor, table, single sitters, all the little things lying on the table or hanging on the wall. Everything is sharp, detailed, and carefully placed within the composition.

Hockney is British, he even dresses like a sophisticated English gentleman, but he spent a huge part of his life in Los Angeles. He’s basically the man that shaped the popular view of L.A.’s vein. In 2005 however, he moved to his country of origin for a couple of years, settling at Yorkshire, near the place he was born. After some dramatic events in his life, he returned to L.A. nearly a decade later. Before he did though, he painted some landscapes, including this absolutely massive piece, composed of 50 canvases.