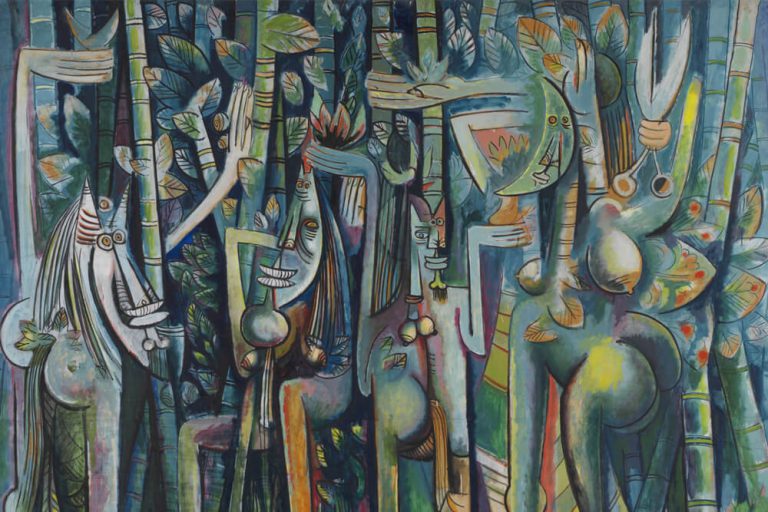 Around the year 1920, many countries in Latin America started some kind of avant-garde movement towards Modernism. The idea of renouncing traditional rules imposed by academia made its way across the ocean. Many artists travelled or studied in Europe, getting in contact with the modernist scenes that were happening in Paris, Munich, or Moscow.

But instead of just reproducing what they had seen abroad, the modernists started adding elements of the local culture, creating new pieces that depicted their realities.

The Moments of Cuban Modernism

In Cuba, this process started around the end of the 1920s, thanks to Revista de Avanze (1927-1930). The magazine promotes the new European styles and supports the search for a new cultural national identity.

Encouraged by new artistic ideas, painters and sculptors started to break up with Academia de San Alejandro, the most traditional art school in Havana at the time.

The first generation of Cuban modernists wanted to highlight simple and common people, painting rural scenes (Los Campesinos) and the working class. They wanted to bring back forgotten (or suppressed) nationalist values from all the cultures that were part of Cuban society.

Victor Manuel García Valdés (1897-1969), studied classic art at Academia de San Alejandro and saw modernist paintings for the first time in 1925 during a trip to Europe. From this encounter, he began to incorporate modern elements into his work.

Garcia’s Gitana Tropical plays an important role in opening modern art on the island. His painting of a peasant woman with mestizo features, surrounded by a rural landscape, is a starting point for new themes and techniques used.

The portrait is painted with colors and textures that emanate a rustic feeling. We don’t know who the subject is, and her expression is enigmatic.

Wifredo Lam (1902-1982), probably the most famous Cuban painter, is part of the second generation of Cuban modernism.

This group is strongly associated with the influence of African and Creole culture, religion, and its importance for national identity – Afro-Cubanism.

With studies at San Alejandro, Lam traveled to Europe around 1923 where he spent long periods of his life. He met Pablo Picasso, Henri Matisse, André Breton, and developed a strong visual language, mixing elements of African culture, tropical landscapes, and surrealistic figures.

In La Jungla, these figures have mask-like faces and stand in the middle of a sugarcane field. This is a reference to years of Cuban exploitation by colonization and enslavement of African and Creole people.

René Portocarrero (1912-1985) also included elements of African culture in his works. He was born in Havana, attended courses for a brief period at Academia de San Alejandro, and continued his studies in a self-taught way.

Carnaval belongs to a period during the 1940s when Portocarrero started to create series depicting popular festivities and religious celebrations. The African influence is seen in clothing, props, and other objects in the images. In addition to painting popular culture, Portocarrero is known for works rich in architectural aspects, creating a modern Baroque. The paintings have a profusion of colors and decorative details, illustrating the urban landscape of Havana.

Amelia Peláez (1896-1968) is another artist who incorporates Havana’s architecture in her work.  After studying at Academia de San Alejandro, Peláez traveled to Paris where she enrolled at Ecôle du Louvre and in courses with Fernand Léger. There, she begins to introduce modern elements in her work. When returning to Cuba, she created a series of still lifes using the new visual language depicting local flowers and fruits.

Interior con columnas is one of the works in which Peláez paints the architecture of Havana and its mix of colonial buildings and local designs. The presence of the black line is present in many works and updates the interior scenes depicted in paintings, modernizing them. Peláez had a prolific career, painting murals and creating ceramics until her death.

At the end of the 1950s, abstraction was part of the art vocabulary in Latin America. The Concretistas (concrete movement) was strong with important groups in Brazil (Grupo Frente, Grupo Ruptura) and Argentina (MADI). The Concretistas are, then, considered the last phase of Cuban Modernism.

Sandú Darié (1906-1991), Romanian-born, arrived in Cuba in 1941 and stayed until his death. Initially trained as a lawyer, he began his artistic career creating drawings for magazines in Romania. Around the 1940s, he got in contact with Gyula Kosic, the founder of MADI, and started working towards Concretism. From 1959 to 1961, he was part of Los Diez Pintores Concretos. Darié created paintings, sculptures, and installations, exploring space, volume, movement, and color.

Estructura transformable is the name of a series of works that also plays with kinetic art. Abstract and colorful moving objects, in various dimensions, can be transformed– depending on the viewer’s action.

Modernism as a Way to Join the International Art Momentum

In short, during the different phases of Cuban Modernism, artists had the same goal in mind: to make Cuban art international. Just like other Latin American countries, they looked inside for a form of nationalism that could be modern, distinctive, and universal. And after that, through pure experimentation with abstract forms, shapes, and materials, uniquely Cuban modern artwork came into existence.

In 1922, the Semana de Arte Moderna (Modern Art Week) was held in Brazil. Marking the official beginning of Modernism in Brazil, the event lasted an...