Violeta Parra, The First Latin American in the Louvre Palace 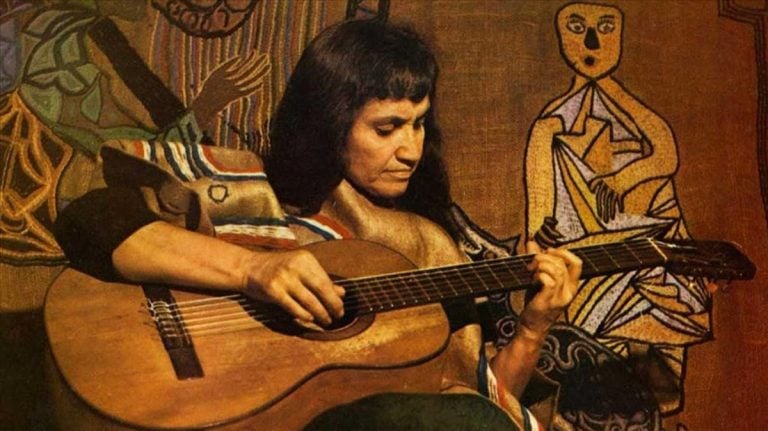 In April 1964 the Musée des Arts décoratifs in the north-western wing of the Louvre Palace hosted an extraordinary exhibition which went down in history as the first solo show of a Latin American artist in the museum. The artist, Violeta Parra, was a woman and a Chilean who wove legendary songs and tapestries.

Parra started her career as a musician and composer who, in the 1950s, greatly popularized folk music in Chile. She died by suicide in 1967. Her moving song Gracias a la Vida (Thanks to Life), created that same year, became a leading anthem. It was also an inspiration for the protest music genre nueva canción chilena. This turned out to be hugely influential in the revolutionary movements in Chile in the 1960s and 1970s.

The 1964 exhibition Chilean Tapestries by Violeta Parra. Sculpture and Painting was a multi-sensory experience. During the five weeks of the show, one could easily stumble upon the artist who came to the museum every day to chat with visitors. While there, she continued working on her tapestries, playing the guitar, singing and even serving empanadas! Moreover, the display included not only arpilleras (patchwork stitches), but also wire sculptures, and paintings.

As art critic P. M. Grand described in his review for Le Monde:

Violeta is present […] to play the guitar, to sing sad and expressive music, to invent as she embroiders […]. Petite and brunette […] simple and complex like a figure from Lorca, or like one of her sculptures, where the tangle of metallic wires make golden flowers burst from a black tree.

However, the show might not have taken place at all. Initially, the selection committee rejected Parra’s application. Only when one of the museum officials asked them to reconsider their decision did the committee agree and the show went ahead. Amid these uncertainties, Parra lost faith and at one point even doubted herself. In a letter to Amparo Claro she wrote:

How could I have an exhibit at the Louvre, I, the ugliest woman on the planet, who comes from a tiny country, from Chillán, the end of the world?

Despite doubts about her appearance (her skin was marked by childhood smallpox), she was strong and aware of her own talent. Once, when strolling close to the Louvre Palace with her friend Alejandro Jodorowsky (yes, the Jodorowsky), she told him:

I’m just a tiny woman, but this edifice doesn’t impress me. Mark my words: before long, you’ll see my works exhibited here.

Parra’s tapestries were seen by Swiss art critic and filmmaker Marie-Magdeleine Brumagne. In a review for Tribune de Lausanne, she revealed that Parra had only started making them six years before and considered that she had turned her life into art without realizing it. A year later, Brumagne made a documentary about Parra called Violeta Parra, Chilean Embroiderer. In this film the artist asserted that she didn’t even know how to draw or how to make embroidery correctly.