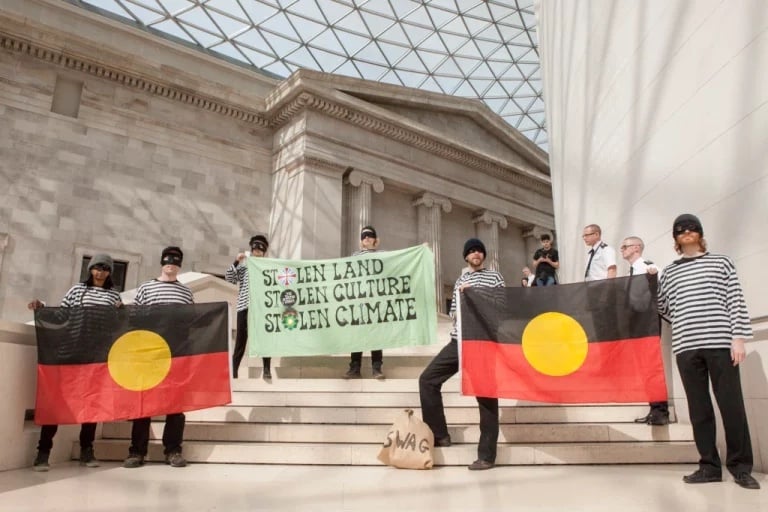 On the steps leading up to the exhibition. Photo by Amy Scaife. Bp or not bp.

At the end of the 18th century, the British empire added Australia to its territory. Since the famous arrival of Captain Cook white people have governed the island. As it happened elsewhere, they plundered the land, relegated the Aboriginal and Torres Strait Islander communities, and stole invaluable exemplars of Aboriginal cultural heritage. Now, the Traditional Owners want their things back. In recent years, the conversation about restitution has increased in popularity. As such, European institutions have begun to return pieces to their countries of origin. In Australia, some objects did not even leave the island and yet their rightful owners cannot have them.

In 1770, Captain James Cook arrived in Australia for the first time. The British crown saw it as an ideal opportunity to expand its territory, while also alleviating prison overpopulation. They declared the island terra nullius, meaning that it belonged to no one. In reality, there were at least 750,000 people populating the land, distributed among 500 Indigenous groups. Even more, they had been there for 60,000 years.

The people defended their lands as hard as they could. Tragically, many of them died and the rest lost the territory. In fact, the Indigenous population was reduced to only 10% in the first decade after colonization. Apart from military conflicts, new diseases such as smallpox caused many casualties. The coldness with which the white colonizers recounted the atrocities is truly terrifying.

In less than 20 years we have nearly swept them off the face of the earth. We have shot them down like dogs. […] We have made them outcasts on their own land, and are rapidly consigning them to entire annihilation.

Cited in Australians Together.

Also, there were cases in which they were taken into missions. In them they had to follow a Western style of life. Today, most Aboriginal people live in marginalization.

As British colonizers were taking land, they also stole invaluable treasures of Aboriginal cultural heritage. The Australian Institute of Aboriginal and Torres Strait Islander Studies (AIATSIS) reported in 2020 that over 100,000 pieces were still in overseas institutions. Of these, about one-third are in the UK. The rest of them are either in Europe or North America. Only 3% are still in Oceania, where they are also the most willing to talk about restitution. Nevertheless, other countries are showing signs of cooperation too.

For example, one of the most emblematic pieces of Aboriginal cultural heritage is the Gweagal shield. This object might be one of the first pieces of evidence of first contact in Australia. Furthermore, it is a testament to colonial looting and violence. Its story is told by the community and in diaries from the colonizers, including Cook. According to records, it was taken in 1770 after a confrontation between Cook and the Gweagal warriors. Among them was Cooman who protected himself from the shots of the white men. While the British fired guns, Cooman had to leave his shield behind and flee. Apparently, that was when the object was taken. Indeed, right at its center, the shield has a hole.

The Fight to Get Objects Back

Today Indigenous communities are very involved in this process. Just like in other regions, they are not reclaiming every single piece. They just want the items that are most important to them and that they need. For example, Rodney Kelly, a descendent of Cooman, heads the petition to bring the shield back to Australia permanently and then return it to its Traditional Owners or Custodians.

The objects of interest in this discussion are cataloged as secret or sacred. According to the Victorian Aboriginal Heritage Council, these pieces have to fall into at least one of these categories: one, they can be associated with traditional burial; two, they could have been created for ceremonial, religious, or burial purposes; three, they could be used or seen by only certain people; and four, they originated from or contain materials that only certain members of the community can use or see. Therefore, these objects were not even classified as artworks by their makers. At least not in our Western sense of the word. Moreover, they play a central role in the rituals and in lives of their owners.

Once Again, The British Museum

Not surprisingly, the British Museum is a prominent actor in this situation. This institution has 6,000 pieces of cultural heritage. From this only a small portion is on display. As usual, they refuse to return the items to their rightful owners. However, the Museum does loan cultural objects to Western institutions in Australia. While the communities see this as an opportunity, it has not been easy for them. In fact, the Australian government has taken measures to avoid any attempt of restitution in such circumstances. For instance, many see the Protection of Cultural Objects on Loan Scheme as an impediment to such claims.

Regardless, there have been stories of success through the initiative by the AIATSIS. For example, in 2019, the Manchester Museum returned Gangalidda and Aranda cultural material. A great thing about this case is that it came without conditions or limitations. This means that the Aboriginal communities now have complete agency over these objects.  No one can tell them how to keep them or use them, thus also returning all the power over the objects.

It’s not just the items, it’s the spirit attached; they were taken. […] It’s a very, very powerful event and it helps in the cultural revival that’s going on.

Cited in the AIATSIS Report on the Return of Cultural Heritage Project 2018-2020.

Aboriginal Cultural Heritage: So Near, Yet So Far

Usually, we think of restitution as an international issue, meaning that an object from country A is in a collection of country B. However, in Australia there are also Indigenous communities reclaiming their objects that are still on the island. The problem is that they are in Western institutions. For this the Australian government has implemented a plan for domestic repatriation. In order to smooth the process, they created the Indigenous Repatriation Program—Museum Grants. It works with eight museums and the Aboriginal communities. According to the Office of the Arts from the Department of Infrastructure, Transport, Regional Development, and Communication, the program has achieved the return of 2,330 secret sacred objects.

One more thing, in this article we speak mainly about cultural objects. However, Aboriginal cultural heritage also includes human remains taken from their sacred burial grounds. To anthropologists and other scientists that study them, repatriation seems to be an obstacle to science. But to the communities who seek to reclaim their ancestors, it is a matter of justice.

Finally, there is no way of turning back time. What happened during colonial times will never change. That is not the purpose of restitution though. It is about admitting and mending wrongdoings, healing communities, and allowing future generations to learn about their culture. Additionally, what these cases teach is that not every single culture around the world shares the Western idea of art and heritage. While the West keeps these objects in cases, the Indigenous peoples use them.

“Busting the myth of peaceful settlement”. Australians together. Accessed on 15 February 2022.

“Colonisation”. Australians together. Accessed on 15 February 2022.

Daley, Paul. “The Gweagal shield and the fight to change the British Museum’s attitude to seized artefacts”. The Guardian. Accessed on 24 February 2022.

Separated by oceans and the present host of political and social barriers, Australia isn’t an easy jaunt away for a quick art appreciation weekend...