Painting of the Week: Claude Raguet Hirst, A Gentleman’s Table 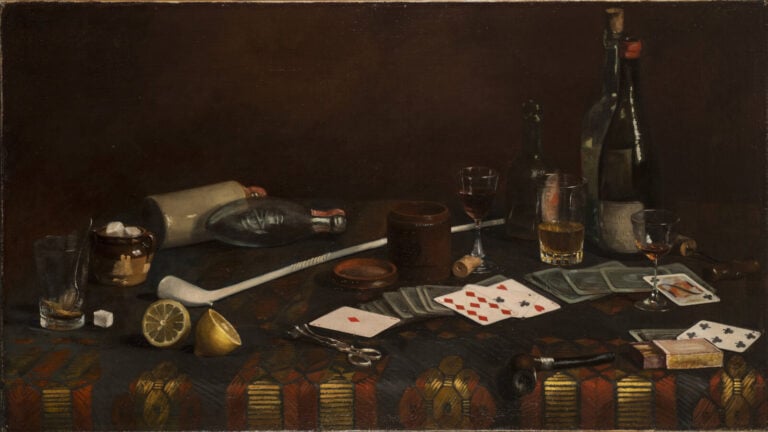 A Gentleman’s Table by Claude Raguet Hirst is a mysterious painting that echoes the realism of Winslow Homer, Thomas Eakins, and Henry Ossawa Tanner. It explores both the dignity and the immorality of ordinary life. It depicts the human experience of the late 19th century United States. Like the absinthe suggested by the glass, spoon, sugar cube, and lemon; the subject of A Gentleman’s Table is strong, notorious, and sometimes lethal.

Late 19th century United States was a nation under rapid development. It was experiencing the “Second Industrial Revolution” with the emergence of steel, electricity, chemicals, and oil. Life-altering inventions entered the market such as radio, telephone, and electric lights. Rapid urbanization and mass migrations from rural areas resulted in large and socially-mixed cities. New theories and philosophies entered the collective consciousness, such as evolution and natural selection, Karl Marx and class struggle, and imperialism and colonialism.

Almost every aspect of American life was rapidly changing, and the fruits of science and progress were lauded as achievements of the age. However, there was a growing social anxiety alongside such progressive changes. Alcoholism, gambling, and smoking were on the rise among urban men, and these social ills were thought to be symptoms of the changing times. These social anxieties and illnesses are explored in Claude Raguet Hirst’s A Gentleman’s Table.

A Gentleman’s Table was commissioned by a Chicago men’s club to adorn one of its walls. Claude Raguet Hirst used her realistic style to capture the activities common among club members: drinking, gambling, and smoking. Bottles of wine and liquor, playing cards, and tobacco pipes litter a table. The painting measures 18 by 32 inches or 46 by 81 centimeters. The items in the painting are lifesize and echo objects commonly found on many of the club’s tables. Art imitates life through lifelike scale and realistic detail.

When Claude Raguet Hirst painted A Gentleman’s Table it must have been an empowering feeling for her knowing that a Chicago men’s club, a bastion of masculine society, was officially recognizing her feminine talent as an artist. However, while Hirst was painting a subject appealing to her male patrons, she was also subversively critiquing the masculine pastimes too. Hirst’s hyper-realistic style captures both the pleasures and vices of drinking, gambling, and smoking. Hirst’s middle to upper class patrons would see the pleasures, while Hirst, prohibitionists, and later modern viewers would see the vices.

Claude Raguet Hirst achieves her trompe l’oeil, French for “deceives the eye,” through her sharp lines, graduated shading, material reflections, and tactile patterns. The corked bottles in the right background have clean contours against the muted brown background. The sliced lemon in the left foreground has progressive shadows colouring its round form. The stemmed cup in the right midground has shimmering highlights reflecting its glass material. The silk tablecloth in the immediate foreground has a lustrous pattern casting its material sheen. These many photographic techniques reinforce the visual illusion of A Gentleman’s Table.

When Claude Raguet Hirst painted A Gentleman’s Table it is unknown if Hirst was a fatalist, a reformist, or an optimist. Did she willingly accept that men will always drink, gamble, and smoke in their formally codified clubs? Did she reject this notion and hoped that men would see the error of their ways and curtail their habits with the influence of A Gentleman’s Table and the Temperance Movement? Alternatively, did she see these habits as the least destructive pastimes of men and thought there were more ruinous factors to society’s anxiety? It is unknown which school of thought Hirst subscribed to, but A Gentleman’s Table is definitely a narrative and allegorical painting. It is simply a matter of deciphering which narrative it ultimately tells. Visit the National Museum of Women in the Arts in Washington, DC and discover the mysterious narrative for yourself.